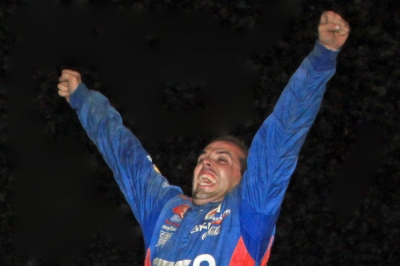 Jesse Stovall celebrates atop his car in victory lane. (stlracingphotos.com)

Stovall earned $5,000 in the Valvoline Battle Royal, running side-by-side with the low-running Sheppard over the final five laps at the third-mile oval in capturing his fifth career series victory.

Sheppard nearly made it a photo finish at the checkers in settling for second while ninth-starting Billy Moyer of Batesville, Ark., was third. Jeremy Payne of Springfield, Mo., was fourth and polesitter Randy Korte of Highland, Ill., rounded out the top five.

Shannon Babb of Moweaqua, Ill., who was gunning for a MARS weekend sweep after victories in Highland, Ill., and Paducah, Ky., fell out of contention with a near-spin, then spun on lap 33 to draw the race's final yellow flag.

Brian Shirley of Chatham, Ill., started outside the front row and led the first 25 circuits of the 40-lap feature, but the 13th-starting Sheppard stormed to the front, taking command on lap 26. Shirley's race would end a few laps later with mechanical problems.

Sheppard stayed in control, but as the race entered the late stages, Stovall worked his way into contention. Restarting third after a lap-33 yellow, Stovall grabbed the second spot and pulled alongside Sheppard as the frontrunners began a duel to the checkers. Sheppard was ahead at the start-finish line through lap 38, but Stovall nosed ahead at the white flag and beat Sheppard back around the final lap to secure the victory.