Rice surprises himself, grabs $5,000 at Moler 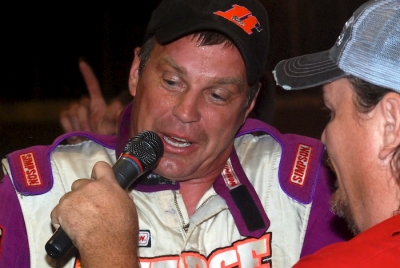 Moler Raceway Park's quarter-mile bullring had plenty of moisture and traction in the milky brown surface, so Rice warned fellow competitor Eddie Carrier Jr. not to expect too much. | Notebook | Slideshow

"Man, I'm going to try not and hold you up," Rice said he told Carrier during driver introductions. "I ain't no good at these places. I said I'm just going to try and go out there and run and get out of your way."

So after Rice enjoyed a raucous victory lane celebration in picking up $5,000 and the 8-foot trophy, Carrier gave the winner a little ribbing in the pit area for his lousy prediction.

"He said, 'Man I never run good here.' Then he goes out and win the race," Carrier said shaking his head.

The fourth-starting Rice was thrilled to capture the unsanctioned special, the 5-year-old track's richest event, but it was as difficult as Rice might've suspected.

For Rice to reach victory lane in the 50-lapper, he was aided by a broken axle by race-dominating Scott James, a spin by leader Chad Stapleton, and a late caution that helped him keep Carrier at bay in the final laps.

Carrier, of Salt Rock, W.Va., settled for second when he couldn't mount a serious challenge on Rice the final four laps after the last of seven cautions appeared on lap 47.

"I think I might've had a shot at him (except for) that last caution," Carrier said. "If that last caution wouldn't have come out — we were getting into lapped traffic — and I started working him a little bit, and he got to where he couldn't maneuver as good. But then after that caution he just took off."

Ninth-starting Jason Jameson of Lawrenceburg, Ind., finished third with Rod Conley of Wheelersburg, Ohio, coming from the sixth row to finish fourth. Justin Rattliff of Campbellsville, Ky., started third, fell back to seventh, then got back up to third before taking his overheating car to the pits during the final slowdown.

Stapleton and James started on the front row with James busting out to an early lead, looking unbeatable as he built a full-straightaway margin after a dozen laps and kept a cushion of lapped cars between his No. 81 and his closest pursuers.

Even with his engine picking up a miss that could be clearly heard as he circled the track, James was firmly in control at the halfway point. But it was all over five laps later when James went into turn three and his left-rear wheel and axle disconnected from the car, sending him off on the hook.

That handed the lead to Stapleton, while the race-long battle for third between Rice and Carrier became a battle for second. They were dueling for that spot and keeping pace with Stapleton when the leader lost control in turn four.

"Honestly I think we were losing a right-rear tire. It was going away a little bit," Stapleton said. "About three or four laps before that, Jerry was going down the backstretch and had me passed and I passed him back. I knew then, I thought 'I got this, I've just gotta be patient and try and drive straight.' "

But Stapleton said he was preoccupied with a slower car and briefly lost focus in turn four on the 35th lap.

"When I looked up, I kind of had a slight push, and I rolled back in the gas a little too quick, and it just came around on me," the track points leader said. "I screwed up."

Rice couldn't avoid Stapleton, but he was able to continue while Carrier was collected in a heap with the former leader. Officials restored everyone to their positions except Stapleton, who ended up 11th.

"I knew I was a little better than Stapleton, and he got really bad sideways," Rice said. "I tried to (keep) from hitting him, but once I got into him, I had to go on and spun him on around."

Said Carrier: "I thought I was done."

While Carrier was able to continue with minimal damage, he couldn't catch Rice, who is looking forward to some big races coming up with the Lucas Oil Late Model Dirt Series visiting nearby Lawrenceburg, Ind., next weekend and the 41st annual World 100 coming up at Ohio's Eldora SpeedwAY.

"We can't wait for Eldora," Rice said. "I think we're going to go to Lawrenceburg next week. It's going to be fun."

Notes: Rice's Warrior Race Car has an ECR powerplant and sponsorship from Brooks Electric and Herrington's Tire Service. ... Rice said the team was considering asking about buying a duplicate of the towering trophy he picked up in victory lane. "I know (car owner) Brian (Brooks) wants one for his garage and I'd like one for mine. That's awesome." ... The most serious of seven slowdowns came on the seventh lap when Greg Johnson and Brian Wilhite tangled on the backstretch. Johnson, last year's race winner, suffered damage to the right side of his machine and was forced out of the race. ... Other cautions appeared for debris (lap eight); Tim Carpenter's spin after contact with Tim Prince (lap 17); a slowing Mike Meyers (lap 19); the lost wheel of James (lap 30); Stapleton's spin (lap 35) and the final yellow for Carpenter and Rattliff's departure. ... Moler's next Late Model special is the $2,000-to-win season championship on Sept. 23.