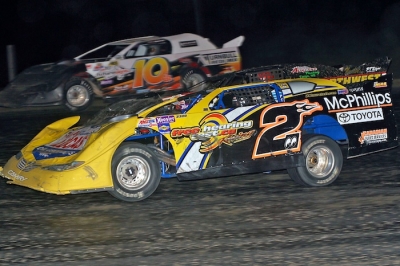 Mooney turned back the fellow front-row starting Weiss early in the race and held off Kaanta in slower traffic during the closing laps on his way to scoring the $1,100 triumph.

Notes: Mooney’s victory comes just two weeks after he scored his first Late Model victory of any kind at his home track of Red River Co-op Speedway in Manitoba. ... The race was slowed by two early cautions before running green to the finish. ... Mooney borrowed a carburetor from Weiss prior to the event. ... The event kicked off a stretch of racing that will include seven races in eight days. The next event is Sunday at Southwest Speedway Dickinson, N.D.