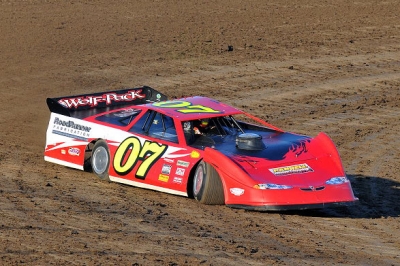 MCCOOL JUNCTION, Neb. (Aug. 12) – Kelly Boen of Henderson, Colo., held off a hard-charging Kyle Berck of Marquette, Neb., in a side-by-side finish Friday night at Junction Motor Speedway to earn $2,000 in a 25-lap race that was co-sanctioned by both the Lucas Oil Midwest LateModel Racing Association and the National Championship Racing Association DIRTcar Series. | Slideshow

Fifth-starting Dave Eckrich of Oxford, Iowa, charged to the second position early in the race, but slipped back to third at the finish. Mike Collins of Council Bluffs, Iowa, finished fourth with Travis Dickies of Madison, Neb., rounding out the top five.

The victory is Boen’s first since returning to his own equipment after driving for Pannell Motorsports for most of the first half of 2011.

"It's pretty good," Boen added, referring to his Rocket Chassis. "I've got to believe if we're going to win tomorrow, we're going to have to get a little faster. Kyle made it a little too interesting at the end."

Berck was satisfied with his runner-up finish, but for a moment, he thought he was going to score the victory after moving to the high groove on the final lap of the race.

"I got a little rhythm going on the bottom," Berck said. "I kept eyeballing that top side. I wanted to go up there so bad, but the car didn't want to. That last lap I thought, he's protecting. He hasn't been up there. I just gritted my teeth going down the back straightaway and I said, ‘I'm going to beat him off turn four.’ We needed about 50 more horsepower to do that. We had a good run. It was fun, I really thought I had him. That's as close as it gets and we'll try again tomorrow night."

Notes: Boen’s Rocket Chassis is sponsored by Road Runner Fabrication and Pannell Motorsports. ... The victory is Boen’s second straight on the NCRA tour following his July 16 win at Mid-Nebraska Speedway in Doniphan, Neb. ... The victory is also Boen's seventh in the past 10 MLRA races at Junction Motor Speedway. ... Among the race’s cautions was a lap-eight pileup that included MLRA series point leader Al Purkey and John Anderson, who is second in the standings. Anderson received the most damage of the two, forcing him to visit the pit area multiple times before retiring with an 18th-place finish. Purkey stuck it out for a 11th-place finish, extending his lead to 34 points over Anderson. ... The race was the first of a weekend doubleheader at Junction Motor Speedway. Saturday’s race will pay $3,000 to the winner and will also be a co-sanctioned event.