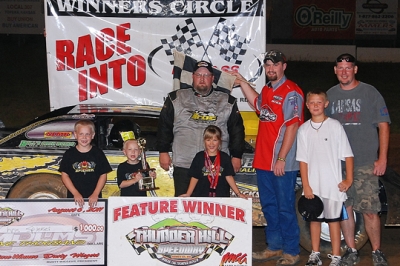 MAYETTA, Kan. (Aug. 6) — Inheriting the lead after a tangle of frontrunners, Chris Spieker of Massena, Iowa, raced to victory Saturday at Thunder Hill Speedway, his first on the MidwestDirt Late Model Series.

Spieker earned $1,100 in the 25-lapper while outrunning runner-up Bo Egge of Kearney, Neb. Jimmy Segraves of Valley Center, Kan., was third followed by Ed Moore and Chad Dolan in the first MDLMS event at the 4/10-mile oval.

Matt Johnson of Archie, Mo., started on the pole position with series points leader Delbert Smith of Wichita, Kan., alongside. Johnson, a heat race and dash winner, quickly jumped to the top side of the track with Smith down to the bottom as the two raced side by side the first nine laps.

As the leaders worked lapped traffic, the got together in turn four, with Smith coming to a stop in turn two to draw a caution.

On the restart, Johnson realized his car was also mangled from the contact and stopped at the top of turn three. The departure of both drivers put Spieker in the lead.

Doug Sieh would bring out another caution a lap later with a spin in turn four, and Dave Conkwright did the same three laps later.

Egge tried to challenge Spieker on the restart, but he settled for second the rest of the way.

Notes: Spieker's MasterSbilt Race Car is sponsored by Iroc Race Cars, Coors Light and Crop Production Services. ... The victory was Spieker's second of the season overall; he won May 28 at Adams County Speedway in Corning, Iowa. ... The track honored Late Model driver Steve Fuqua, who died at his Mayetta home on July 31. He was 55. Fuqua was a former champion at Thunderhill. ... The dash was sponsored by G&G Dozer. ... Next up for MDLMS is an Aug. 19 event at Salina (Kan.) Speedway, a makeup of Friday's rainout.