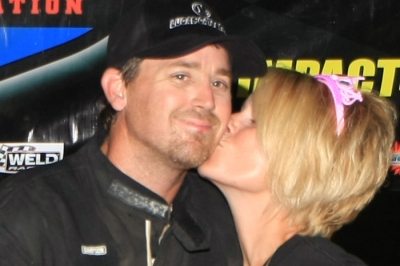 WHEATLAND, Mo. (July 30) – Brad Looney raced to his third Lucas Oil Midwest LateModel Racing Association victory of the season Saturday night at Lucas Oil Speedway. The Republic, Mo., driver started from the pole, but had to find a way around second-starting Justin Wells of Aurora, Mo., who moved to the lead on the start of the race. | Slideshow

Looney overtook Wells on lap 20 and led the remainder of the event on his way to earning $3,000 for his first career victory at the 3/8-mile racetrack.

"I knew I had to make a move soon,” Looney said of his battled with Wells. “When I found something up there in three and four getting off the corner, I got too him and made the move. It all worked out."

Jesse Stovall of Galena, Mo., raced from ninth to second in only his third race out in a new Victory Circle by Moyer Race Car. He now has three runner-up finishes this season in Lucas Oil MLRA competition.

"We're learning every time we come on the race track with this new car,” Stovall said. “I made a quick call to (chassis supplier) Billy Moyer right before we started. He told me a couple of adjustments. He made the car what it was tonight."

John Anderson of Omaha, Neb., came from sixth to third to score his second-best finish of 2011. Mark Burgtorf of Quincy, Ill., had a solid night, winning the opening heat race and finishing fourth in the main event. Matt Johnson of Archie, Mo., rounded out the race’s top five finishers after starting 12th. Wells ended up eighth.

Notes: Looney's Hatfield-powered Victory Circle Chassis is sponsored by Family Pharmacy, Federal Protection Inc., and Republic Glass. ... The victory is Looney’s first on the series since he scored back-to-back wins at I-80 Speedway in Greenwood, Neb., on April 2 and Heartland Park Topeka (Kan.) April 8 to start the season. ... Looney also has three MARS DIRTcar Series victories this year to go along with his three MLRA wins. ... Jeff Roth was the night's hard charger advancing from 23rd to 13th. ... Series points leader Al Purkey of Coffeyville, Kan., broke an axle while running sixth, ending his night early. ... The series will sit idle until August 12-13 when Junction Motor Speedway in McCool Junction, Neb., hosts the King of the Hill event. The weekend doubleheader will pay $2,000 to the winner Friday night and $3,000 Saturday night.