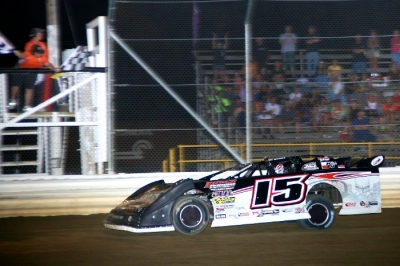 Jon Henry takes the checkers for his $3,000 victory. (Action Photos)

The 2009 series champion led all but the first lap at the 3/8-mile oval to notch his seventh victory in nine starts this season at Attica. | Slideshow

Henry took the lead after outside front row starter Brian Ruhlman slipped up in turns three and four and held off Doug Drown of Wooster, Ohio, on a late-race restart to secure the victory.

"We can win on the bottom and win on the top. I don't care, this race car is awesome," Henry said in victory lane. "The guys put a good package together for the feature. When I rolled on the top and tried to keep my car as straight as I possibly could and I was just hooked up the entire race.

"I couldn't believe how fast I got around Ruhlman at the start ... he jumped the cushion and I was able to get around him," Henry added. "I keep getting those darn cautions every time with just a few laps to go. This car was just so good."

Drown, who started on the second row with Henry, settled for second with Michigan transplant Rusty Schlenk in third. Ruhlman, of Clarklake, Mich., and 10th-starting Devin Shiels of Britton, Mich., rounded out the top five finishers. Polesitter John Mayes Jr. of Belmore, Ohio, wasn't a factor in finishing 20th.

Ruhlman got the jump on Mayes at the outset as the fourth-starting Henry moved into second with Drown third. Henry drove past Ruhlman on lap two with Drown again following suit as J.R. Hotovy pressured Ruhlman for third. Henry pulled away slightly but the battle for second was a dandy between Drown, Hotovy, Ruhlman, Rusty Schlenk and reigning track champ Ryan Missler.

Ryan VanderVeen's lap-five spin brought out the first yellow and Henry was able to pull away as Hotovy, Drown and Schlenk battled behind him. Just as Henry hit lapped traffic on lap 13, Hotovy spun on lap 11 as he was battling for the runner-up spot.

With a clear track, Henry was able to pull away again while Drown and Schlenk tussled behind him. Henry caught the rear of the field with seven laps remaining, but Drown was too busy fighting with Schlenk, while Ruhlman, Shiels and Mike Bores waged their own war for fourth.

Casey Noonan's flat tire on lap 27 drew the final caution, giving Drown and Schlenk one more shot at Henry. But Henry was just too strong in rolling to the checkers.