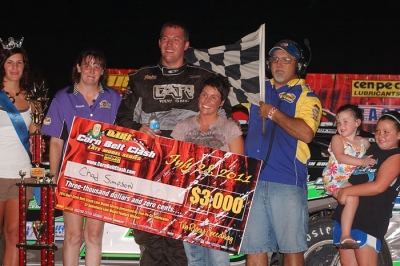 COLUMBUS JUNCTION, Iowa (July 28) — Although the path he took to get there was a little different than the previous two Dart Corn Belt Clash events, the end result was the same as Chad Simpson of Mount Vernon, Iowa, drove to his third series victory in as many days when the tour made a stop at C.J. Speedway on Thursday night for the final event of a midweek tripleheader. | Slideshow

After strong runs in preliminary action for the previous two nights’ main events, Simpson had to work a little harder Thursday night, turning a fifth-place heat race effort into a $3,000 feature victory.

Chris Simpson, of Oxford, Iowa, made a good run from his fifth row starting spot to finish second, nearly a straightaway behind his older brother. Kevin Kile of West Liberty, Iowa finished third, while of Tim Isenberg of Marshfield, Wis., and Jeremiah Hurst of Dubuque, Iowa, rounded out the top five finishers.

Polesitter Kurt Kile of Nichols, Iowa, took charge at the start of the 30-lap feature while fellow front row starter Kevin Kile fell into the second spot. Hometown driver Jason Utter moved into contention after charging from a fourth row start and made his way by Hurst and Kevin Kile for second just before the race's first caution on lap four.

When racing resumed, Kurt Kile again paced the field with Utter pursuing as Chad Simpson made his way into third. Simpson pulled to the outside of Utter as the pair ran side-by-side into turn one. Utter’s night came to an early end when he clipped a tractor tire on the inside of the corner, causing heavy damage to his race car. The incident, which brought out the second caution, put Simpson on Kile's rear bumper for the lap six restart.

Kile held the point when the green flag waved with Simpson just behind. As the leaders completed the ninth circuit, Kile drifted high entering turn one and slipped off the top of the speedway. Although he regained control of his race car, Simpson slipped past for the lead before Kile re-entered the track in second.

Kile eventually dropped the second position to Chris Simpson while Chad Simpson survived two more restarts to score the win, his fourth straight on the series and sixth of the season.