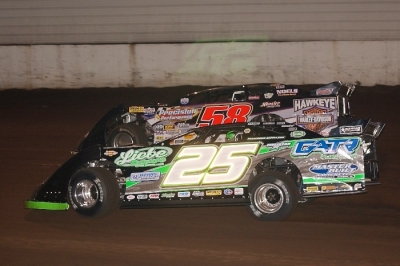 The polesitting Eckrich of Cosgrove, Iowa, took command at the drop of the green while fellow front-row starter Rob Moss of Iowa City, Iowa, settled into second. Simpson, who started outside the third row, worked around Tim Isenberg and younger brother Chris Simpson before dropping to the low side to challenge Moss and Justin Mitchell. He made his bid for second by the third lap, then set his sights on Eckrich, who built a sizable lead.

Simpson wasted little time running down Eckrich, pulling even just a few laps later. The frontrunners ran side-by-side for several laps with Simpson working the low groove and Eckrich one lane higher. Eckrich and Simpson swapped the top spot midway through the event, but Eckrich continued to fight off Simpson's persistent challenges.

As the leaders navigated turns one and two on lap 18, Simpson powered beneath Eckrich and was able to take over the lead exiting turn two. The reigning series champ pulled away to score the $2,000 victory.

Chris Simpson overtook Eckrich late to get the second spot while Isenberg, of Marshfield, Wis., and 10th-starting Jason Utter of Columbus Junction, Iowa, rounded out the top five. Moss faded to 10th.