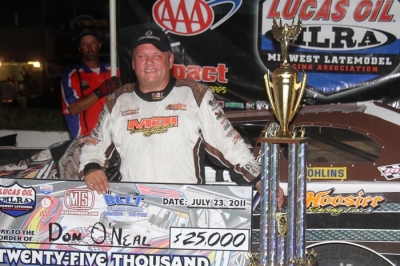 GREENWOOD, Neb. (July 23) — Outside front-row starter Don O'Neal of Martinsville, Ind., overtook fellow front-row starter Chris Simpson of Mount Vernon, Iowa, on a lap-32 restart and cruised the rest of the way Saturday for a $25,000 victory in the inaugural Silver Dollar Nationals at I-80 Speedway. | Video | Slideshow | Prelims

O'Neal pulled out to a straightaway lead in the late stages of the 80-lapper as he steered a part-time ride, the Illinois-based Moring Motorsports No. 1, to victory in the Lucas Oil Midwest LateModel Racing Association.

"I can't wait to race the next race. It's been that kind of year," the 47-year-old O'Neal said. "I'm excited about going to the racetracks and can't wait to get to the next one, no matter if it's the yellow No. 71 car or this brown No. 1 car. It's been a good year so far and hopefully we can keep the momentum going and stay patient."

O'Neal patiently wrapped up the victory in his first visit to I-80, methodically taking lap after lap to avoid any serious challenges after he took command at the 4/10-mile oval hosting Nebraska's richest Dirt Late Model event.

Fifth-starting Dale McDowell of Chickamauga, Ga., a 2002 winner at the track in Hav-A-Tampa Dirt Racing Series action, finished second with Brian Birkhofer of Muscatine, Iowa, rallying from his 20th starting spot to finish third. Austin Hubbard of Seaford, Del., was in the top five all the way in finishing fourth and Jimmy Mars of Menomonie, Wis., rounded out the top five. Simpson slipped back to sixth at the finish after leading 32 laps.

Simpson took command from the outset with O'Neal mixing it up with Hubbard and Billy Moyer. O'Neal briefly slipped back to fourth after a lap-20 restart, but he sized Simpson up on the lap-32 restart for the winning move.

"I sort of let those other guys get out in front early, then I just got a good run on (Simpson) down the front straightaway on the restart, just run down there and slid (past) him. I just tried to be patient and hit my marks and it paid off," O'Neal said.

"I'd restarted on the inside, and I got snookered. I noticed the outside was a little better. So that time I took the outside and I just got a good run, got up to (his) quarterpanel down the front straightaway and just drove it on in there and passed him."

Simpson tried to answer the move a lap later in turn two, but O'Neal fought him off and began to pull away.

The race was for second the rest of the way as O'Neal kept a safe distance between his No. 1 car and his closest pursuers in racing to the rich payday.

Notes: O'Neal's winning MasterSbilt is powered by a Clements Racing Engine and sponsored by Freeport Recycling Center, MDI Environmental Systems and Magnaflow Exhaust. ... O'Neal has six victories overall in 2011, half of them in Larry Moring's car. ... Runner-up Dale McDowell said he bent something on the right front of his car in an early three-wide battle, but was able to soldier on to second. ... Billy Moyer of Batesville, Ark., advanced from his 10th starting spot and into the top five in the race's early stages, but he slowed and came to a stop after the lap-50 mark, dropping out of the 34-car field.