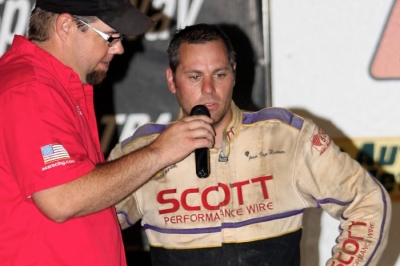 Polesitter Brian Ruhlman, of Clarklake, Mich., led the first 28 laps of the event but had to settle for second while Dowagiac, Mich., veteran Phil Ausra finished third. Jon Henry of Ada, Ohio, advanced from the 16th starting position to finish fourth with hometown driver J.R. Hotovy rounding out the top five.

“I wanted to run the bottom the first half of the race,” Van Wormer said. “I was able to pick off cars on the bottom, but I was also good on the top. I had to move up there in lapped traffic and got around the top real good.”

The night ended far better than it began for Van Wormer. While running second in his heat race, the home state driver went into turn three a little too hot and slammed into the outside wall, damaging several components on the right front of the car.

“The upper control arm is still bent,” Van Wormer said in the pits after the races. “We pretty much had to replace the entire front suspension on this (car), and still didn’t get everything fixed that we needed to.”

In a bizarre set of circumstances, Van Wormer wasn’t the only talented driver to start at the rear of the field. A flat left-front tire in his heat race regulated South Haven, Mich.’s Alan Vochaska to the 15th starting spot. Henry was also forced to start 16th after a heat race accident that sent his car into a wild slide down the front straightaway and into the infield wall.

Brian Ruhlman wasted no time moving into the early lead with the fourth-starting Hotovy in tow. The duo quickly jumped to a sizable advantage — a full straightaway at times — over the rest of the field. Behind them, the trio of Van Wormer, Vochaska, and Henry were picking their way through the pack, and by lap 10, Van Wormer was already up to fourth with Vochaska seventh and Henry eighth.

A lap 19 yellow erased the lead Ruhlman and Hotovy had built and, with Van Wormer now in third, brought the fans to the edge of the seat for the restart. Hotovy lost the handle of his race car in turns one and two following restart, bringing out the yellow and advancing Van Wormer up one spot to second.

Vochaska’s run came to end on lap 23 when he and heat winner Ryan VanderVeen made contact exiting turn four while battling for the third spot. The accident sent both drivers hard into the wall and ended the night for both competitors after a few heated words.

The restart saw Ruhlman leading Van Wormer, Phil Ausra, Henry, and Guy Volk. Van Wormer stayed glued to the rear bumper of Ruhlman for four laps before plotting his move. He pulled alongside Ruhlman on lap 27 and battled the defending ALMS champ for the top spot for two full circuits before powering ahead for good on lap 29.

Once out front, Van Wormer never looked back. He survived a restart with four laps remaining and pulled away to the victory.

Notes: Van Wormer’s Rocket Chassis is sponsored by Bayline Fire Protection, Van Wormer Management and Services on Site. ... Along with the $4700 first prize, Van Wormer also took home over $800 in lap money from various sponsors. ... Curtis Roberts did not start after breaking a rear-end while leading his heat. … Only eight cars finished on the lead lap. … The race was slowed by five cautions. … Thanks to various sponsors, drivers earned $47 per lap led in the feature. … Curt Spalding pulled doubled duty and won the UMP Modified feature later in the program. … The next event for the Sunoco ALMS Series is July 29 at Attica Raceway Park in Attica, Ohio, paying $3,000 to win.