From correspondent, track and series reports 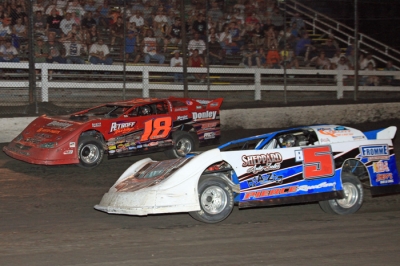 The 37-year-old from Moweaqua, Ill., captured Thursday's Herald & Review 100 at Macon Speedway, earning $5,000 and his 10th series victory at the fifth-mile track where he first started racing. The race was a non-points makeup of a July 7 rainout on the month-long summer tour. | Slideshow

Babb started seventh and steadily worked his way to the front, making his winning move on the 87th lap in overtaking runner-up Brandon Sheppard of New Berlin, Ill., who started third and led most of the race.

Third-starting Brian Shirley of Chatham, Ill., who led early in Tim Lance's backup car, was third while Jason Feger of Bloomington, Ill., rallied from his 16th starting spot for fourth. Dennis Erb Jr. of Carpentersville, Ill., advance six positions to round out the top five.

Jack Sullivan of Greenbrier, Ark., started outside the front row and duked it out with Shirley early in the race, but he was listed 16th in the final rundown. Four cautions slowed the race, including a lap-85 yellow that set up Babb's winning pass.

Notes: Babb's Victory Circle Chassis is sponsored by Petroff Towing, Donley Trucking and B Auto Parts. ... The victory marked Babb's third Herald & Review 100 victory at Macon in a race that's long been part of the series. ... One more rain makeup remains on the series Saturday at Fairbury (Ill.) American Legion Speedway for a $10,000-to-win event rained out June 25.