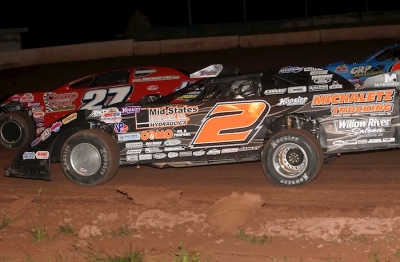 Smith, a former WISSOTA Rookie of the Year who branched out to national touring, earned $2,000 for the victory at Superior as he topped series points leader Jake Redetzke of Eau Claire, Wis., who started outside the front row. John Kaanta of Elk Mound, Wis., was third followed by 19th-starting Adam Hensel of Barron, Wis., who topped Smith the previous night at Ogilvie (Minn.) Raceway.

Darin Meierotto led early with Redetzke and Lance Matthees giving chase, but Meierotto retired during a lap-10 caution, handing the point to Redetzke. Smith meanwhile was working his way up to the top five, taking a spot from Darrell Nelson and then squeezing past Matthees on the frontstretch to complete the pass for the second spot in turn one.

A caution for Matthees and his car's broken rear end bunched the field with four laps remaining, and Smith restarted right behind Redetzke. Smith worked underneath the leader in turns one and two and led the final two laps.

The series wraps up the midweek tripleheader Thursday at Grand Rapids (Minn.) Speedway.