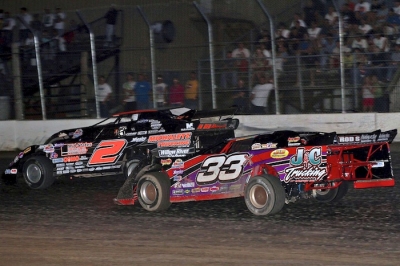 OGILVIE, Minn. (July 19) — Surviving a 360-degree spin, Adam Hensel of Barron, Wis., raced to his circuit-leading third Dart Challenge Series victory of the season Tuesday at Ogilvie Raceway, earning $2,000 in the first race of a midweek tripleheader on the tour. | Slideshow

Smith, who started outside the front row, was out front early with the fifth-starting Hensel moving up to give chase from the second spot after a yellow for first-time Late Model pilot Keith Tourville of Dairyland, Wis. With about 10 laps remaining, Hensel slipped underneath Smith exiting turn two and pulled away to a comfortable lead.

But with two laps remaining, Hensel made contact with John Henkemeyer's slower car in turns three and four. Hensel was forced into a spin, but he stayed on the gas to keep going as a caution waved for a tire barrier that was pushed onto the racing surace. Henkemeyer was sent to the rear for the caution, and Hensel cruised the rest of the way.

Notes: The 23-year-old Hensel's Rocket Chassis by Tim Logan is sponsored by J&C Trucking, J&J Motorsports, Rod's Painting & Sandblasting and Pro Air Conveying. ... Hensel is the only WISSOTA Late Model winner at the track as he repeated his series victory from last season. ... The track doesn't run a weekly Late Model division. ... Gregg Hill and Travis Budisavolich scratched from the main event after tangling in a heat race. ... The series heads to Amsoil Speedway in Superior, Wis., on Wednesday and heads to Grand Rapids (Minn.) Speedway on Thursday.