From All the Dirt reports 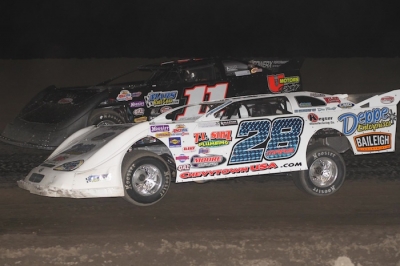 Doar took off at the outset with Mars on his heels. Kaanta and Laursen battled for third before Laursen secured the position on lap eight. By lap nine, Corey Seckerson — who recorded the fastest lap of the night — reached the fourth spot.

Leaders and lappers got mixed up on lap 15 and it only took Mars four laps after that to get around Doar and into the lead. After that, there was no catching Mars, who weaved in and out of cars as if it were easy, continually putting distance between himself and the second-running Laursen.

The real race that took place was between Seckerson, Doar and Kaanta, who swapped spots for nearly 10 laps.

By the time lap 43 rolled around, Fegers had roared into the third spot with Doar and Kaanta running behind him. But it was all Mars at the finish to cap the two-race weekend.