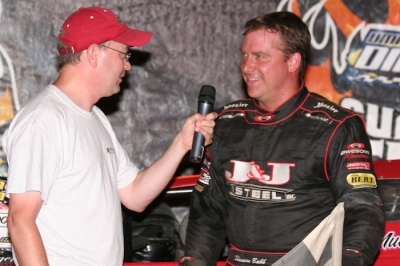 That's what it felt like for all the drivers chasing him as Babb, who collected $25,000 for the title, reeled off a remarkable six straight victories the final week, capping it Saturday with a 60-lapper worth $10,000 at Oakshade Raceway.

Jeep Van Wormer threatened him just past the race's midpoint, but the race had a familiar ending when Babb pulled away once again, leaving Van Wormer as the runner-up for the third straight night.

"We were just a little bit short tonight. And last night. And the night before," Van Wormer cracked.

But even Babb, who won nine races overall, was ready to head home and count his money, if nothing else.

"It's been really good for us," Babb, of Moweaqua, Ill., said in victory lane. "We haven't had a lot of bad things happen to us. I hate to see anything like that come to an end, but everybody's ready to get home and take a shower in their own house and relax. Our hearts and our blood pressure have been pumping for a month straight."

Babb's dazzling performances kept the blood pumping for the fans, too, as he stayed in attack mode the final week, treating the Oakshade fans to his third career series victory at the 3/8-mile oval.

Moran jumped into the early lead, but Babb quickly went to work on him, pressuring on the inside early before making an outside pass on the backstretch of the ninth lap. From there he pulled away, building up a half-straightaway lead after 20 laps while the sixth-starting Van Wormer picked his way toward the front.

Babb had a full-straightaway advantage on Van Wormer at lap 25, and the Michigan driver started closing the gap over the next five laps, drawing within a few lengths on lap 34. But just as soon as Van Wormer got close, Babb eased back away, stretching his margin back to a half-straightaway.

When Babb put a cushion of three lapped cars between his No. 18 and Van Wormer with five laps remaining, it was all but over.

"I could feel him," Babb said of Van Wormer. "He's never too far away. He's a helluva racer, and I knew this is one of his good places, so I had to (stay) on my toes and keep going.

"I changed my line up a little. It seemed like the line I was running was getting polished up, and we moved a little bit lower in (turn) three and found a little bit more traction, just kind of idling through. I kept the car under me and just tried to keep it as straight as possible."

Van Wormer, who finished second to Babb on Thursday in Banner, Ill., and Friday at Attica, Ohio, has seen Babb put it in another gear before.

Erb never got in the mix with the leaders but recorded his fifth top-five finish on the tour.

"We had a good car and was coming on real good," he said. "We'd like to have seen a caution, or hopefully a little bit longer race. We had to start further back and got up in there, so we're happy with that."

Notes: Babb's Victory Circle Chassis is sponsored by Petroff Towing, Donley Trucking and B Auto Parts. ... Babb's six-win streak is the longest since he accomplished the feat in 2006. ... The feature was slowed by a single yellow on the 14th lap when Casey Noonan spun off turn four. ... Brandon Sheppard drove Brad Eitniear's B4U in the feature, finishing 21st. ... The series points chase is over, but a pair of makeup races for series rainouts are scheduled for Thursday at Macon (Ill.) Speedway and next Saturday at Fairbury (Ill.) American Legion Speedway.

Jack Sullivan got the high groove working late and made a last-lap pass of race-long leader Brandon Sheppard to win the 12-lapper. Sheppard and Alan Vochaska, who outduel Ryan Missler, also transferred to the main event. Provisional starters for the feature are Dillan White, Brian Ruhlman, Dusty Moore and Craig Vosbergen.

In the redraw among heat winners, Donnie Moran is on the pole with last year's race winner Rusty Schlenk alongside. Shannon Babb and Matt Miller are on the fifth row and Jon Henry starts fifth. ... No Ohio drivers have won series races, but four won heat races. ... Pat Ehlert scratched for the night after his water pump fell off in his heat race. ... Ky Harper loaded up and won't run a C-main. ... Craig Dippman pulled out of his heat with a broken shock but plans to run his C-main. ... Dillan White and Curtis Deisenroth are on pole for C-mains.

Inheriting the pole position because of penalties to front-row starters Casey Noonan and Chris Ross, Jon Henry cruised to victory in the fifth heat as he guns for his third straight victory at Oakshade. Fifth-starting Brian Ruhlman was on the move early, grabbing the second spot from Ross, but he slid high in turn one on a mid-race restart to fall from contention. That allowed Ross to get back to second with Noonan, who fell back as far as fifth, in third. Henry, Ross and Noonan got the three transfer spots with Ruhlman a distant fourth after falling back to sixth. Three yellows were thrown for bad starts, with Noonan and Ross being put to the second row after the third failed start. Pat Ehlert pulled to the pits before a lap was complete. A lap-three yellow appeared when Jason Riggs spun in turn one while battling with Matt Furman; Riggs spun in turn two on the next lap for the race's fifth caution.

Last year's race winner Rusty Schlenk swept into the lead from outside the front row and led polesitter Dennis Erb Jr. all 10 laps. Canadian Andrew Reaume was the only driver in the ifled to keep touch with the frontrunners in getting the final transfer spot. Alan Vochaska and Brad Eitniear battled for fourth early with Vochaska edging ahead in that battle midway through. the 10-lapper went caution-free but last-place finisher John Caldwell bashed the backstretch wall exiting turn two on the final lap; he was a lap down.

Series champ Shannon Babb cruised to victory in a heat made up mostly of local drivers. Babb's only scare came when the slower car of Michael Jantz spun in front of the leader on the eighth lap, but Babb took evasive action. Tom Ordway got second when Rick Delong briefly lost control in turn two on the second lap, but Delong got the spot back by halfway and got the second transfer spot. Ordway held on for the third transfer spot just behind Delong. The first caution appeared for a called-back start, then a second for Jantz's spin. On the last lap, Ky Harper got into a infield tire barrier in turn three and spun, collecting Mike Miller and Jantz.

Polesitter Matt Miller zipped away from the outset as fellow front-row starter Ryan Unzicker slipped high exiting turn two on the first lap. While Miller built a straightaway lead by halfway, Unzicker had his hands full with fourth-starting Doug Drown while sixth-starting Jack Sullivan headed forward. Unzicker strengthened his hold on the second spot at halfway while Drown stayed ahead of Sullivan for the final transfer spot. The race was caution-free.

Fourth-starting Donnie Moran swept around polesitter Jeep Van Wormer on the backstretch of the sixth lap and pulled away to win the caution-free 10-lapper. Van Wormer held off James as they also transferred to the main event, while Brandon Sheppard was a distant fourth. ThefFront-row starters Van Wormer and James waged a lead-swapping battle the first two laps with Van Wormer getting back underneath James for good to lead lap three. Moran stayed with the frontrunners during their early battle, grabbed second from James on lap four and turn set his sights on Van Wormer.

Jeep Van Wormer of Pinconning, Mich., was fastest of 51 qualifiers Saturday at Oakshade Raceway for the final points race of the UMP DIRTcar Summernationals. Van Womer's lap of 14.817 seconds at the 3/8-mile oval puts him on the pole position for a heat race. Other heat race polesitters: Matt Miller of Whitehouse, Ohio; Shannon Babb of Moweaqua, Ill.; Dennis Erb Jr. of Carpentersville, Ill.; and Casey Noonan of Sylvania, Ohio.

Five heats races will transfer three cars apiece to the main event. Three drivers from a B-Main and four provisional starters will round out the 22-car starting grid.

After group qualifying, three drivers from each of five heat races will transfer to the main event with two drivers from a B-main and four provisional starters rounding out the 22-car field.

The evening marks the coronation of champion Shannon Babb of Moweaqua, Ill., who wrapped up his third career series championship three nights earlier. Babb is gunning to become the first driver to win six straight series races since he accomplished the feat in 2006.

The race marks the 12th year Oakshade has hosted the finale. ... Reigning track champion and current division points leader Rusty Schlenk won last year's race. Schlenk is fielding a new car (he had a rollover accident Tuesday in Brownstown, Ind., that destroyed another car). ... Shannon Babb is a two-time winner at Oakshade, capturing victories in 2004 and '06. ... Seven teams are on hand at Oakshade that ran all 22 points events on the month-long tour (Shannon Babb, Scott James, Dennis Erb Jr., Ryan Unzicker, Jack Sullivan, Brandon Sheppard and Dillan White). ... Two non-points makeup of rainouts are scheduled for Thursday at Macon (Ill.) Speedway and next Saturday at Fairbury (Ill.) American Legion Speedway. ... Brandon Thirlby would've been the 52nd entrant, but a blown head gasket prevented him from entering. ... More than half the night's field is made up of first-time series entrants for 2011. ... Selected fans are being paired with the 22 feature starters. The fans drew ping-pong balls to match themselves with starting positions, and if that driver wins, the fan receives $100. ... Modifieds and hornets are also in action.