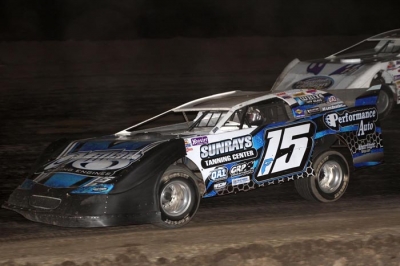 ABERDEEN, S.D. (July 15) — Third-starting Justin Fegers captured the opening feature on the Rumble weekend at Brown County Speedway for a $3,000 victory on the Dart Challenge Series for WISSOTA Late Models.

Fegers took the checkers ahead of outside front-row starter John Kaanta of Elk Mound, Wis., for his first series victory since the 2010 season opener. Brian Diede of Huron, S.D., last weekend's series winner at his hometown track, was third. Jeremy Kelly of Mandan, N.D., and with winner's younger brother Marshall Fegers rounded out the top five. | Slideshow

Most of the drivers are expected to stick around Saturday for the $5,000-to-win, non-touring event that wraps up the Rumble weekend.