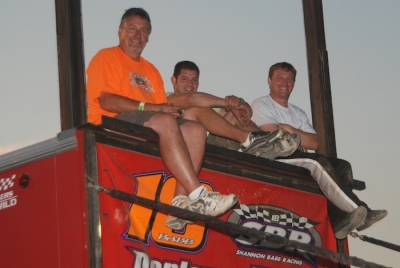 The 37-year-old Moweaqua, Ill., driver pocketed $5,000 more in the second-to-last points race on the month-long tour. Babb wrapped up the $25,000 title, the third of his career, two nights earlier. | Complete Summernationals coverage

The winless Van Wormer, of Pinconning, Mich., settled for second after leading his fifth race of the tour, while polesitter Ryan Unzicker of El Paso, Ill., was a close third in the 40-lapper. Jack Sullivan of Greenbrier, Ark., and eighth-starting Jon Henry of Ada, Ohio, rounded out the top five.

“That was a hell of a race. I knew Jeep could do it. ... we raced awesome right there," said the high-running Babb, who fended off the lower-running Van Wormer's charge. "He was probably a little better than I was. ... I just got by him early when my tires had good edges on them

Van Wormer, who slipped ahead on the 25th lap and unofficially led five circuits in all, was satisfied to finish second to the series-dominating Babb, who also the championships in 2005 and '06.

"It was just a good battle. ... that's all I had," Van Wormer said. "It is frustrating a little bit, but there are a lot of guys that aren't running in the top five or leading a race. You've gotta look at it like that. It's a positive."

Unzicker and Van Wormer started on the front row with Van Wormer leading the first lap, but Babb jumped quickly to the high side to take control on lap two. The race's lone caution for a slowing Matt Furman appeared on the fourth lap, and Babb went back to work, building a half-straightaway lead by the 15th lap while Van Wormer, Unzicker, Scott James and Sullivan gave chase.

But Babb struggled a bit with traffic near the midpoint, and Van Wormer closed in on the lead while James fell from contention when he briefly slipped over the banking in turns three and four. Matt Miller and Brandon Sheppard did the same thing on lap 22, but the caution never appeared as Van Wormer continued to work Babb in lapped traffic.

Van Wormer pounced with two slower cars out front, slipping ahead on lap 25 and beating Babb through the traffic. But Babb followed suit a few laps later and with clear track, got rolling again on the high side to sweep back into the lead on lap 29.

"I thought maybe it was going to take him a little bit longer" to get through traffic, Van Wormer said, "but he ended up clearing 'em pretty easy, too. I thought maybe I could put a little distance between me and him and maybe we'd get to some more lapped traffic. That wasn't so much the case."

Van Wormer had one last show when Babb came upon the slower cars of Craig Vosbergen and Dillan White on lap 37, but Babb sliced between them entering turn one to build a margin Van Wormer couldn't close.

Babb's eight victories are more than any single driver on the tour since he reeled off 13 in 2006, and it's a turnaround for the two-time Dirt Track World Champion who had been struggling to regain his success in recent seasons. Jumping into a Victory Circle Chassis out of Billy Moyer's Batesville, Ark., shop has helped the resurgence.

"We stayed home this winter and we had to do something," Babb said. "We had to study and learn everything about our car and try to do something to get an edge. Otherwise I was going to have to give it up — my checkbook was running low. Anyhow, it's paid off."

In the redraw among heat race winners, fast qualifier Ryan Unzicker drew the pole position with Jeep Van Wormer alongside. Jack Sullivan and series champ Shannon Babb starts in the second row. ... Gary Fore, Babb's truck driver, has drawn until tonight, when crew member Derek Brown drew No. 4, Babb's worst start after winning a heat. ... Van Wormer is still looking for his first series victories despite leading significant laps in four series events. ... Iowa's Matt Furman, making his first appearance at Attica, is going to a backup car after breaking an oil line in finishing third in his heat race. Furman wasn't sure if the engine was hurt, but the oil-pressure light was blinking in the corners and he didn't want to take a chance. "Hopefully this is car as fast or faster," said Furman, who was making changes on the setup to match his other Rocket Chassis. ... Justin Chance fell out of his heat race because mud knocked the battery cable off. ... With all the series regulars already locked into the main event, Craig Vosbergen and Devin Shiels are the only drivers who have competed in a series event who aren't yet in the main event. They're assured provisional starting sports, although Shiels and his team were trying to make repairs on the crunched nosepiece of his No. 51. ... Brian Ruhlman is in line for the UMP weekly points provisional. ... Attica's points provisional will be the driver highest in division point not already in the main. ... UMP scorer Brad Hockaday checked out the night's schedule early in the night, noticing there was not intermission listed. "You won't see many of those here," said Rex Lejuene, the track's general manager. "We sell food when there's a division (fans) don't want to see."

A high-running Jeep Van Wormer emerged from a three-car battle out of turn two on the first lap, then led the rest of the caution-free race. Jon Henry, a six-time winner at Attica this year, was a few lengths behind in second while the third and fourth spots were up for grabs thorugh the first half of the race among Dillan White, track champ Ryan Missler and tail-starting Doug Drown. White turned up the heat on Henry late in finishing third while Drown made a last-lap pass of Missler for the final transfer spot. Drown failed to get a qualifying time after packing his right-rear wheel full of mud before tripping the clock.

Shannon Babb swept into the lead from outside the front row and cruised to his series-leading 12th heat race victory. Polesitter Matt Miller moved higher to chase Babb but couldn't make up any ground in finishing nearly a straightaway behind in second, while Jason Riggs was a solid third. Further back in the fourth and final transfer spot was Casey Noonan, who held off Brian Ruhlman in the caution-free prelim.

Outside front-row starter Jack Sullivan edged polesitter Brandon Sheppard on the first lap and edged away for his third heat race on the series. Sheppard stayed within striking distance but never made a serious challenge in finishing second. Matt Furman, making his first Summernationals feature start after three attempts, was a distant third as his car smoked the last four laps. Rody Schroyer was a half-track behind the leaders at the finish but got the fourth and final transfer spot. The first start was scrapped when fourth-starting Justin Chance slowed on the backstretch; he was pushed to the infield. A caution appeared after one lap was scored when Michael Stiltner knocked an infield tire barrier into the middle of turn four.

Polesitter Ryan Unzicker ran the middle of the track to an easy 10-lap victory, stretching his lead to a half-straightaway by the halfway point and cruising. Unzicker notched just his second heat race victory on the series. Scott James finished second followed by Dennis Erb Jr. and Rick Delong for the four transfer spots. Three starts were required to get the race rolling. The first start was called back when the third-starting James slipped under the Unzicker before the field hit the start-finish line. The second start was scrapped when Ky Harper stopped in turn three. Another early yellow flew when John Mayes spun on the fronstretch after nosing under an out-of-shape Ken Hahn.

Ryan Unzicker of El Paso, Ill., was the fastest among 38 qualifiers Friday at Attica Raceway Park for the 21st leg of the UMP DIRTcar Summernationals, the second-to-last event on the month-long tour. The only driver to crack the 15-second barrier, Unzicker turned a lap of 14.973 seconds on the 3/8-mile oval to earn the pole position in one of four heat races. Other heat race polesitters: Brandon Sheppard of New Berlin, Ill.; Matt Miller of Whitehouse, Ohio; and Jeep Van Wormer of Pinconning, Mich.

Four heat races transfer four drivers apiece to the main event. Two drivers from a B-main also join the lineup along with four provisional starters to make up the 22-car field.

Shannon Babb, who clinched the $25,000 championship with his Wednesday victory at La Salle (Ill.) Speedway, is gunning to become the first driver to win five straight races on the series since Babb won six in a row from June 28-July 3, 2006. Babb has a series-high seven victories in 20 starts.

Steve Kester spun in turn two on his first qualifying lap. ... Ryan Missler of Bellevue, Ohio, is two-time and defending track champion at UMP-sanctioned Attica. ... Justin Chance of Mansfield, Ohio, captured his first Late Model feature at Attica a week ago. ... Eight series teams had entered all 20 events heading to Attica, but that drops to seven with Donny Walden of Towanda, Ill., decided to skip the final two races in Ohio. Walden notched back-to-back best series finishes the previous two nights, finishing eighth at La Salle, Ill., and sixth at Spoon River Speedway in Banner, Ill. ... Shannon Babb's six-race win streak in 2006 came at Mount Vernon, Ill.; Paducah, Ky.; Poplar Bluff, Mo.; Pevely, Mo.; Danville, Ill.; and Nebo, Ky. ... Among those six tracks, only Paducah and Pevely were on this year's schedule. ... Doug Drown, struggling in his No. 12 Lazer Chassis, plans to drive D.J. Miller's No. 1dj Rocket Chassis at Attica and Oakshade, but his car lost fire when he pulled onto the track for time trials