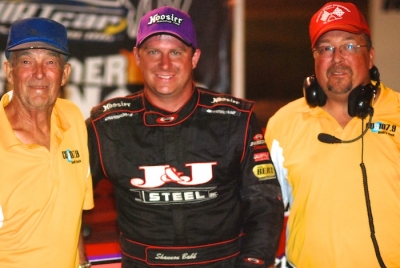 BANNER, Ill. (July 14) — His third series championship wrapped up, Shannon Babb is now simply enjoying a victory tour. And how.

The 37-year-old Moweaqua, Ill., driver notched his fourth consecutive UMP DIRTcar Summernationals victory Thursday at Spoon River Speedway, earning a $5,000 purse that's gravy on top of the $25,000 title he clinched before the series even reached its final weekend.

"Eveything's just going my way this year," Babb said in victory lane as he added to titles he previously won in 2005 and '06. "I've had tough times before but I'm real happy just to get this thing rolling again."

At Spoon River, lapped traffic was his only worry after he slid under fellow front-row starter Steve Lance Jr. on the sixth lap and cruised the rest of the way.

"The ball bounced our way again tonight. We won the heat race — we had a nice little run with (Jim) Moon there — but just drew the pole, and at this place, it typically does what it did tonight. I knew we and to get the lead there because it was going to lock down. We had a really good car that I was tickled to death with.

"(Lance) got the jump on me and made some really nice laps, but he kept overrunning the corners on entrance, and I thought, 'Well, I hope he keeps doing that, because if the bottom gets cleaned up, I'll get rolling here eventually.' Once my tires got hot, they came in and we were all right."

While a struggling Lance held up most of the field that was stuck in the single-file bottom groove, Babb and pulled out to a huge lead midway through the 40-lapper but got bottled up in traffic, allowing eventual runner-up Jeep Van Wormer of Pinconning, Mich., to close in.

Just after Van Wormer caught Babb, a tangle in front of the leaders among Scott Schmitt, Dillan White and Evan Fink in turn four forced the frontrunners to take evasive action.

The yellow gave Babb clear racetrack to pull away from Van Wormer, and another caution on lap 30 was perfectly timed to give him more clear track to complete the victory as he pulled to more than a straightaway lead at the finish.

Van Wormer and third-finishing Brandon Sheppard of New Berlin, Ill., crossed the line next while Lance, of Cuba, Ala., survived to finish fourth ahead of Jack Sullivan of Greenbrier, Ark.

Notes: Babb's Victory Circle Chassis is sponsored by Petroff Towing, Donley Trucking and B Auto Parts. ... Babb is the first driver with four straight series victories since he pulled off the feat in 2007. ... Sixth- and seventh-place finishers Donny Walden and Jim Moon posted their best career series finishes. ... Evan Fink's car got banged up in the lap-22 scramble in turn four. He also suffered damage when he collided with Dillan White during the four-wide parade lap. ... The series heads to Ohio for the final two races, a $5,000-to-win event Friday at Attica Raceway Park and a $10,000-to-win finale at Oakshade Raceway near Wauseon, Ohio.

Polesitter Joe Harlan led all the way to win the consy over Tim Lance, who held second spot the entire distance. Both transferred to the main event. Pete Parker was further back in third, fighting off Eric Smith while Joseph Hughes started outside the front row but fading quickly, ending up 10th.

Polesitter Doug Drown won the C-main to transfer to the B-main along with Jake Griffin, Matt Furman and Craig Vosbergen

Series champion Shannon Babb will start on the pole in gunning for his fourth straight series victory with Steve Lance Jr. to his outside. Brandon Sheppard and Jeep Van Wormer are scheduled to start on the second row after the redraw among heat winners.

Series champion Shannon Babb fought back on the final lap to regain the lead from polesitter Jim Moon, who nearly pulled off an upset in his car powered by a CT525 crate engine. Babb led early but the lower-running Moon inched ahead to lead in the final laps. But just when it appeared Moon would steal a victory, Babb blasted deep into turn three to regain the lead and the victory. Mark Voigt was a distant third while Scott Schmitt got the fourth and final transfer spot. No cautions slowed the race, but Jerry Lierly and Evan Fink both spun toward the inside frontstretch tire barriers as they took the checkered flag.

Polesitter Brandon Sheppard stuck with the low groove all the way, holding off a higher-running Matt Miller by a few lengths all the way for the victory. Bobby Pierce ran just behind the frontrunners in third all the way as they pulled a straightaway ahead of the field by the seventh lap. Tim Lance ran fourth most of the way, but tail-starting Scott James made a last-lap pass for the fourth and final transfer spot in the caution-free prelim.

Polesitter Jeep Van Wormer regained the lead from outside front-row starter Jack Sullivan midway through the 10-lapper, then led the rest of the way afer a lap-six restart. Sullivan settled for second, holding off tight challenges from Ryan Unzicker in the final laps. The top three battled nearly three-wide much of the first half of the race with Sullivan up high, Van Wormer in the middle and Unzicker down low. Kevin Weaver got the fourth and final transfer spot over a distant Joseph Hughes. Billy Hough pulled out on a lap-six caution for Craig Vosbergen.

Taking advantage of a half-hour of track prep, outside front-row starter Steve Lance Jr. found early traction and raced to a 10-lap victory in the first heat. Lance started in the high groove but moved down as the race progressed, taking the checkers just ahead of third-starting Donny Walden. Polesitter Rickey Frankel and seventh-starting Dennis Erb Jr. got the other two transfer spots. A lap-four caution appeared for a lap-one tangle that included Doug Drown, Joe Harlan and Dillan White. Mike Spatola pulled to the pits during the yellow.

Action is set to get under way Thursday at Spoon River Speedway for the 20th leg of the monthlong UMP DIRTcar Summernationals. The event, highlighted by a 40-lap feature paying $5,000 to the winner, has attracted 38 Super Late Models to the 3/8-mile oval.

Shannon Babb of Moweaqua, Ill., has clinched the $25,000 championship with three series races remaining, giving him his third title overall. He also won in 2005 and 2006.

Babb, undefeated this week, will also try to become the first driver with four straight series victories since he accomplished the feat in 2007, a stretch capped by a victory at Spoon River.

After group qualifying, four heat races will transfer four drivers apiece to the main event. Two drivers transfer from a B-main and four provisionals round out the 22-car starting field

Shannon Babb's four-race win streak in 2007 came July 8-11 at Quad City Speedway in East Moline, Ill.; C.J. Raceway in Columbus Junction, Iowa; Quincy (Ill.) Raceway; and Spoon River. ... Thursday's race is a makeup from a June 21 rainout. ... Ryan Unzicker won last year's race at Spoon River. ... Billy Moyer is the winningest series driver at the track with four victories, the first coming in 1986. ... Babb's 15 top-five finishes in 19 starts is twice as many as any other driver except for Jeep Van Wormer, who has eight top-five finishes. ... Van Wormer and Matt Miller have made the feature lineups for all 14 races they've attended without taking a provisional starting spot. .. Among drivers who have made all 19 feature lineups, Babb has taken the fewest provisionals (two). ... Spoon River runs a weekly division for UMP-sanctioned Crate Late Models, and division points leader Jerry Lierly of Camp Point, Ill., is entered in tonight's Super Late Model action.