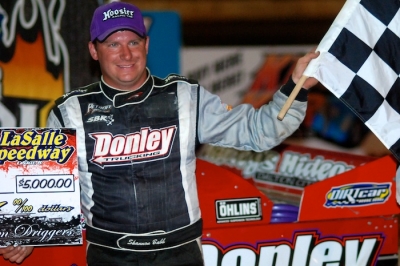 Shannon Babb picked up his sixth series victory and third in a row. (DirtonDirt.com)

"Me and Frankie had a helluva race," the series points leader said as he climbed from his car in victory lane, celebrating his third straight $5,000 victory at the 19th leg of the month-long tour. "If he'd have moved down, I'd never have gotten by him."

Fortunately for Babb, the high-running Heckenast left the door open long enough for Babb to slip underneath on the 16th lap. He ran away and hid from the field the rest of the way, building a half-straightaway lead at the halfway point and maintaining a cushion of two lapped cars the rest of the way.

Babb, one race away from clinching the $25,000 Summernationals title, captured his series-leading sixth series race and continued a streak of five races finishing no worse than second.

Starting outside the front row, Heckenast jumped to the lead at the outset with Babb — and most of the rest of the 23-car field — running lower on the track. The bottom of the track cleaned up and quickened, or "I probably would've been in trouble," said Babb, who began pulling alongside Heckenast after a dozen laps. By lap 15 it was nearly a dead heat at the line and Babb took a lead he'd never give up on lap 16.

"I was running my line trying to keep my tires where they needed to be, and Shannon's right, if I would've moved down, we might've won the race," said Heckenast, who dropped into the lower groove after Weaver dropped him to third on lap 24.

Babb was slowed by traffic late in the race, but Weaver never got close enough to threaten in the final laps.

"The way I've been running, hot and cold, it's feels good to get a second-place finish," said Weaver, who had three third-place finishes on the tour in '09.

Babb, who won 28 series races during his previous series championship seasons in 2005 and '06, is glad to be getting back to Summernationals form as he gets rolling in a Victory Circle Chassis he began driving this spring.

"There's always room to be better and improve," Babb said. "We're not racing the toughest guys in the country, but we're running pretty damn good with 'em."

Notes: Babb's Victory Circle Chassis is sponsored by Petroff Towing, Donley Trucking and B Auto Parts. ... Babb has 68 career series victories, 11 shy of all-time leader Billy Moyer. ... The race was slowed by two cautions. Dan Schlieper side backwards into the turn-three wall on the second lap, then pulled to the pits. Scott James stopped inside the backstretch on the sixth lap to draw a yellow then pitted during the caution period. ... The race was a makeup from a June 20 rainout. ... The night's four-division action was complete by 10:15 p.m. ... UMP Late Models head to Spoon River Speedway in Banner, Ill., on Thursday for a $5,000-to-win event, the makeup of a June 21 rainout.

Scott James (series), Scott Schmitt (UMP weekly), Keith Piano (track) and Mike Spatola (series) were added to the starting field as provisionals. ... James went to a backup car after his gray car slammed the turn-four wall in the heat race. The team was making repairs on the car that had a broken birdcage, broken wheel, broken J-bar and other damage. The rear end was also leaking oil. He'll drive the yellow car the Riggs Motorsports team bought from Bart Hartman. ... Jack Sulivan's team is diagnosing a problem in the engine. The team replaced the distributor cap and rotor hoping to solve the issue. ... Spatola's team put a new nosepiece on his No. 89 after his heat race. ... Four drivers among the first four rows are looking for their first series victory: Frank Heckenast Jr., Bret Sievert, Donny Walden and Mike Glynn.

Rich Bell outdueled Jeep Van Wormer before pulling away for a victory in the C-Main, Van Wormer slipped back midway through the race but came back to finish second, transferring to the main event along with former Summernationals champion Pete Parker.

Shannon Babb, going for his third straight series victory, starts on the pole at La Salle after the redraw among heat winners. Frank Heckenast Jr. starts outside the front row and Kevin Weaver starts third.

Outside front-row starter Frank Heckenast Jr. repelled a mid-race challenge from polesitter Donny Walden for the victory. Heckenast jumped into the lead at the outset, but as the race wore on, Walden got faster and faster in the low groove, pulling up to challenge midway through the race. Walden inched ahead to lead the seventh lap, but Heckenast regained his momentum and swept back ahead to lead the final laps. Matt Miller was third, also running the high groove, while Brandon Sheppard and Dennis Erb Jr. finished far behind with the final transfer spots. No cautions slowed the prelim, but Scott Schmitt pulled to the infield during the race; he drove to the pits under his car's power after the checkers.

Shannon Babb got the jump on polesitter Ryan Unzicker from outside the front row and cruised to a 10-lap victory. Unzicker briefly slipped back to fourth on an early restart, but gathered up his car and pulled away for a solid runner-up finish. Jack Sullivan made an outside pass of Dillan White in the final laps to get third while White and ninth-starting Dan Schlieper got the final transfer spots. Jeep Van Wormer, driving a car with a body panel on the left side without his usual No. 55 after going to a backup car, was sixth and will go to the consolation race. Jeff Larson spun in turn one on the third lap for the race's lone yellow flag.

Polesitter Kevin Weaver, looking for his first series victory since 2007, jumped into the lead at the outset and won the 10-lapper. Bret Sievert was close behind the second after taking the spot from Mike Glynn on a mid-race restart while Glynn, who inherited a front-row starter spot with Doug Drown's scratch, was third. Mike Provenzano and Ryan Dauber got the other two transfer spots. The first of three cautions appeared on the second lap when sixth-starting Scott James tried to get around Sievert on the backstretch. He was squeezed into the concrete, brushed the backstretch wall to lose control and slide into the turn-three wall. The car appeared to suffer significant right-rear damage. After James climbed from the car, he signalled his displeasure to Sievert as he rolled around under caution. Lake Knutti spun on laps five and seven in turn three for the other two yellows.

Donny Walden of Towanda, Ill., topped 29 qualifiers Wednesday at La Salle Speedway in prelims for the 19th leg of the UMP DIRTcar Summernationals. The night's 40-lap feature, a race postponed from a June 20 rainout, pays $5,000 to the winner.

Walden, 12th in series points, posted a lap of 13.472 seconds at the quarter-mile oval to earn the pole position for a heat race. Other heat race polesitters: Kevin Weaver of Gibson City, Ill.; and Ryan Unzicker of El Paso., Ill., just four-thousandths off Walden's time.

Donny Walden's fast qualifying time was his first on the series since 2009 at Tri-State Speedway in Haubstadt, Ind. ... Unless he has an unexpected collapse, it's likely Shannon Babb will clinch the $25,000 series championship following Thursday's event at Spoon River. The maximum points for each night is 80, and Babb's points lead over Scott James is 206. ... Babb is driving his older Victory Circle Chassis tonight, the car he's piloted most frequently on the tour. He's driven the newer car three times with a victory Tuesday in Brownstown, Ind., and runner-up finishes at Paducah, Ky., and Farmer City, Ill. ... Scott James, plagued by a brown recluse spider bite that evolved into a staph infection, went to a Cincinnati hospital near his Lawrenceburg, Ind., home for treatment following the Brownstown race. Technicians drained the infection from his left forearm, and he reports he's feeling better. ... Brandon Sheppard broke a motor Tuesday at Brownstown and the team headed to Bob Pierce's Oakwood, Ill., shop after the races to swap engines. They took the motor from the destroyed car he flipped Sunday at Tri-State Speedway in Haubstadt, Ind., and dropped it into his newer Pierce Race Car. The team worked until 5 a.m. and slept a few hours before going back at it to button it up this morning, crew member Dave Fulton said. ... Modifieds, hornets and street stocks are also in action.