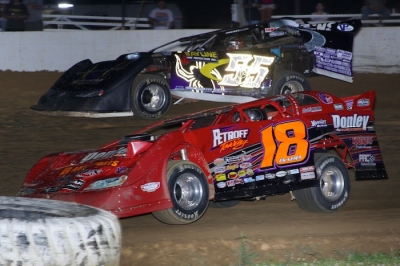 BROWNSTOWN, Ind. (July 12) — Taking the lead after both cars ahead of him sustained damage with 10 laps remaining, series points leader Shannon Babb of Moweaqua, Ill., captured the 18th leg of the UMP DIRTcar Summernationals Tuesday at Brownstown Speedway for a $5,000 victory in the Hoosier Dirt Classic. | Complete Summernationals coverage

Polesitter Jeep Van Wormer led the first 30 laps, but when the lower-running Don O'Neal pulled into the lead on the backstretch on lap 29, Van Wormer tried to answer the move by switching grooves. But Van Wormer made contact with the left-rear of O'Neal's car, resulting in a flat tire. Under the ensuing caution period, O'Neal retaliated by crunching the left-rear of Van Wormer's car in turn one.

Track workers patched up Van Wormer's car, but it clearly wasn't the same on the restart as Babb blew past and pulled away to win by a full straightaway for his series-leading fifth victory.

"I think O'Neal was probably going to win the race and got taken out," said Babb, who himself was nearly knocked out of the race in a turn-three scramble before a lap was complete.

Instead, Babb was increasing his nearly insurmountable Summernationals points lead as he heads down the home stretch in wrapping up the $25,000 title and first since 2006.

Dennis Erb Jr. — who earlier sat with Babb's car perched on his nosepiece in the first-lap scramble — finished second in the 40-lapper that was delayed more than an hour by rain sprinkles at the quarter-mile oval in southern Indiana.

"Luckily we were able to continue on and keep going," said Erb, who started seventh and matched his best finish on the series.

Third-starting Dustin Neat of Dunnville, Ky., finished third in his first series start of 2011 as he regained the position from fellow Kentuckian Dillan White in the race's waning moments. White's fourth-place finish was his best on the tour and 11th-starting Jack Sullivan of Greenbrier, Ark., rounded out the top five.

Van Wormer, booed by the partisan O'Neal crowd after the tangle, limped home in seventh place and remains winless on the tour despite leading his third race past the halfway point. O'Neal pulled off the track after his retaliation and finished 18th in the 22-car field.

Van Wormer and O'Neal had differing opinions on the contact that changed the race's complexion.

"I seen Don was coming on that bottom, and I still had that line on the top that I was running," Van Wormer said. "The next thing I know, he's drifting up in front of me, taking my line right away. You know, I couldn't get to the brakes fast enough and ended up getting into his left-rear a little bit. As racing goes, that's part of it."

"I passed him clean down there and he just hit me in the left-rear coming down the back straightaway and busted the left-rear tire," O'Neal said, adding about his retaliation: "I was going to make sure he wasn't going to win the race."

More than an hour after the race, Van Wormer and O'Neal were in a physical altercation near the track office, Brownstown Speedway promoter Tim Keithley said. The incident lasted about 20 seconds and was broken up by officers of the Jackson County Sheriff's Department. Neither driver faced criminal charges, the promoter said in a phone interview.

Notes: Babb's Victory Circle Chassis is sponsored by Petroff Towing, Donley Trucking and B Auto Parts. ... Four cautions slowed the feature. Besides the critical lap-30 yellow, the first start was called back, and the second start was scrapped for the turn-three accident. A slowing Joe Janowski brought out a lap-13 caution. ... Steve Casebolt pulled out on lap 23. ... Dillan White jumped up to third late in the race but slipped off the backstretch to lose the spot to Dustin Neat. ... B-main winner Ryan Unzicker advanced from 17th to sixth. ... Next up on the series is Wednesday's $5,000-to-win race at La Salle (Ill.) Speedway, a makeup of a June 20 rainout.

Late Models called to the track

After about a 40-minute delay, the track has called the Late Model feature starters back to the track. It'll take a few minutes because most of teams have loaded up. At least one starter, Steve Casebolt, has pulled out of the pit area. The rain stopped about 9:30 and pack vehicles and heavy equipment is still working the track.

Sprinkling rain picked up just as the 22-car feature field pulled onto the track, and the cars rolled around for about five minutes before they were sent off the track. Many teams have loaded up their cars but officials are still waiting, hoping for a chance to get cars back on the track at 9:20 p.m.

Chad Stapleton won a dash among local cars to get the track provisional. He'll join UMP provisionals Brandon Sheppard, Craig Vosbergen and Tanner English. Kent Robinson was in line for a provisional but his car kept collapsing oil lines, and he loaded up. Rusty Schlenk also had a chance at a provisional but couldn't find a car to drive after heavily damaging his in a rollover accident. The main event cars are in the grid at 9 p.m.

Polesitter Ryan Unzicker led all 12 laps to transfer to the main event along with Donny Walden, who took second from Chad Stapleton on the fifth lap and challenged the high-running Unzicker in the low groove the rest of the way. C-main winner Jeremy Hines rallied to finish third, just ahead of Stapleton in a race slowed by three cautions, including one for a turn-four spin by Tim Rivers on a lap-three restart. Lightning flashed off the backstretch during the conslation with thunder rumbling under the roar of the engines and rain sprinkles picking up. A dash follows the mini sprint feature to determine the local track provisional for the Late Model main.

Lightning is kicking up north of the track and the wind has picked up with occasional sprinkles. ... Jeremy Hines won the C-Main over Tyler Allen to transfer to the B-Main. ... Only four cars were running at the finish of the C-main. ... Doug Drown scratched after time trials when his transmission broke and the engine started leaking oil; he loaded up. ... Brandon Sheppard plans to drive Bobby Pierce's backup car in the main event after blowing a motor in his heat race. "I really don't know what's wrong with it," Sheppard said. "It just blew up." ... Sheppard is without a backup car after a rollover accident Sunday at Tri-State Speedway that junked a car. ... Rusty Schlenk, who will be offered a provisional based on last year's UMP weekly points, will have to find a car to drive if he hopes to get starting money. His No. 91 was heavily damaged when he rolled in time trials. He complained of a stiff neck but said the car held up well and that his pride was hurt worse than anything. Schlenk's car ended up resting on the passenger door in turn three. "I don't know how it managed to do that," he said. ... Trying to beat the weather, the B-Main is being called to the track at 8:30 p.m., but rain sprinkles started to pick up.

Polesitter Jeep Van Wormer and fellow front-row starter Matt Miller had a two-car breakaway with Van Wormer maintaining an edge all the way. Miller was comfortably ahead in second at the finish while fellow Indiana drivers Steve Casebolt (inside) and Jason Jameson (outside) battle for the third spot the second half of the race. Chris Streeval surprised them both at the white flag, slipping past to grab third before Casebolt's high-side momentum carried him back into contention. Streeval was scored third at the line ahead of Casebolt, who got the fourth and final transfer spot over Jameson. Tanner English's turn-four spin brought out the only yellow on the fourth lap.

In a front row made up of former Jackson 100 winners at Brownstown, outside-starting Don O'Neal swept into the lead off turn two to get the jump on polesitter Dennis Erb Jr. O'Neal led all the way while Erb, who stuck with him closely the first few laps, found himself trying to hold off Jack Sullivan most of the way. Erb held onto second while Sullivan, who won in his first-ever visit to Brownstown, was a close third. Further back was Joe Janowski for the fourth and final transfer spot. Craig Vosbergen was a distant fifth in the caution-free prelim.

Polesitter Shannon Babb jumped to the lead at the outset and led Scott James all the way in the 10-lapper. James, who started fourth and made a nifty move exiting turn two on the first lap to split two competitors, finished second with outside front-row starter Mike Jewell in third. Justin Rattliff got the fourth and final transfer spot in the caution-free affair.

Outside front-row starter Dustin Neat, among the night's last entries, got the jump and led all 10 laps of the first prelim. Neat fought off early challenges from Mike Spatola while running the low side. Spatola lost second to Dillan White on the fifth lap, and Neat was able to hold him off, too. Neat, White, Spatola and Bobby Pierce transferred to the main event. Polesitter Brandon Sheppard, whose car was smoking from the moment he pulled onto the track, gave up the third spot and pulled pitside on lap seven. Two cautions appeared before a lap was scored. Chad Stapleton spun in turn four on the initial start, then Stapleton and Donny Walden tangled in turn three on the next starting attempt.

Looking for his first series victory this season, Jeep Van Wormer of Pinconning, Mich., topped 40 qualifiers Tuesday at Brownstown Speedway in time trials for the 18th leg of the UMP DIRTcar Summernationals. The night's 40-lap Hoosier Dirt Classic feature pays $5,000 to the winner.

Reigning UMP weekly champion Rusty Schlenk of Jackson, Mich., rolled his car in turn two before taking the green flag in qualifying with his No. 91 Lazer Chassis coming to rest on its passenger side; he wasn't injured.

The night's 22-car field will be set by four cars apiece transferring from four heat races and two drivers from a B-Main. Four provisionals round out the field.

Four-race Shannon Babb, coming off a victory Sunday at Tri-State Speedway in Haubstadt, Ind., enters the event with a near-insurmountable points lead. ... Doug Drown's car was towed off after time trials and Kent Robinson was pushed off after a single lap. ... Check out DirtonDirt.com's complete Summernationals coverage. ... Brownstown was scheduled to be the first race on the tour, but the June 15 rained out. ... It's cooling off at Brownstown after the Ohio River Valley has been slammed by oppressive heat early this week with the heat index hitting 120 in some places. Overcast conditions helped out Tuesday afternoon, and what appeared to be a still-hot evening was pleasant by the end of time trials. ... Menacing clouds appeared in the late afternoon south and west of the track, but according to radar it appears any wet stuff should stay south. ... Among first-timers on the tour this year at Dustin Neat of Dunnville, Ky., and Jason Jameson of Lawrenceburg, Ind. ... Jason Feger, fourth in series points, has decided to drop off the tour with plans to run the Thursday-Friday Lucas Oil Late Model Dirt Series event at Tri-City Speedway in Granite City, Ill. ... The last week of the tour was originally scheduled for just three races, but rainouts have made it a six-race stretch heading to Saturday's finale at Oakshade in Wauseon, Ohio. ... Mini sprints and modifieds are also in action at Brownstown.