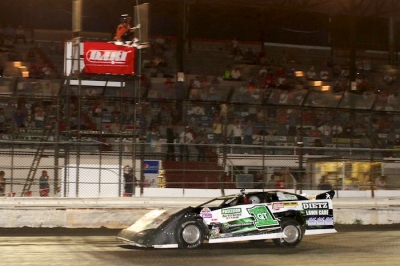 Brian Diede takes the checkers with a fist out of the window. (crpphotos.com)

Diede grabbed the lead from Marshall Fegers just before the halfway point and went on to his his fifth victory of the season and third in a row at the 3/8-mile oval.

Series points leader Jake Redetzke of Eau Claire, Wis., finished seventh. Marshall Fegers was carhged with a caution on the white flag while battling for second with Hensel and was sent to the tail; he ended up 17th.

Notes: Diede's Rocket Chassis from Trace Racing is powered by a Tesar Engineering powerplant and sponsored by Precision Auto Body Design and Dietz Lawn Care. ... Diede's previous series victory came last season at Electric City Speedway in Great Falls, Mont. ... Eighteen of 25 starters were running at the finish. ... Eric Breeschoten was on the move but pulled out with an overheating powerplant. ... Although Scott Anderson was light at the scales after the consolation race, he got a provisional for the main event worth $500. ... Among drivers failing to make the feature: Chad Becker and David McDonald. ... The Dart Challenge Series remains in South Dakota for its next two events July 14-15 at Casino Speedway in Watertown and Brown County Speedway in Aberdeen.