Wallace tops Babb for $10,000 at Clarksville 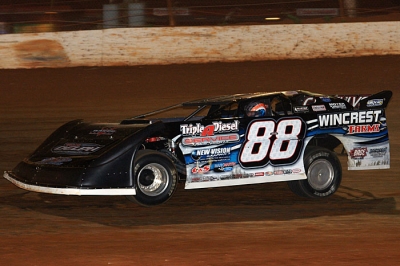 CLARKSVILLE, Tenn. (July 9) – Wendell Wallace turned what started out as a disappointing weekend into the best one he’s had in quite a while in Saturday night’s UMP DIRTcar Summernationals event at Clarksville Speedway.

After struggling through Friday night’s preliminary action for a two-day Lucas Oil Late Model Dirt Series event at Magnolia Motor Speedway in Columbus, Miss., Wallace of Batesville, Ark., made the decision to skip Saturday’s consolation race at Magnolia and headed to Clarksville in hopes of turning his weekend around. | Complete Summernationals coverage

The 45-year-old driver did just that, moving by polesitter Shannon Babb on lap 17 of the 40-lap race and dominating the remaining distance on his way to earning a $10,000 victory at the quarter-mile racetrack.

“It looks like I had 10,000 reasons to make the trek up here. We was buried deep back in the consolation race at Magnolia and we had nothing to lose coming up here,” Wallace said of his decision to leave Mississippi and head to Tennessee. “The car was good ever since we unloaded here. We got a good package. We do a couple things different and it just seems to work for us here.”

The third-starting Wallace moved to second early in the race and followed Babb around the track’s dominant bottom groove. While no one seemed to be able to make the top side of the racetrack work, Wallace gave it a try when the two leaders reached slower traffic and pulled alongside Babb on lap 15. The move stuck just enough for Wallace to nose ahead of Babb and with slower cars blocking Babb on the bottom, Wallace completed the pass two laps later.

Wallace, a veteran driver known for his prowess on slick racetracks, flexed his muscle on Clarksville’s slick surface during the second half of the race, pulling to more than a straightaway lead on his way to recording his biggest victory since he won the Show-Me 100 at West Plains (Mo.) Motor Speedway in 2007.

“I knew when I caught Shannon there he was stuck to the bottom trying to get by them lapped cars,” Wallace said. “The second place guy ain’t got nothing to lose. I stepped out a little bit and the race car seemed to stick real good outside. I knew I could go anywhere I needed to go then.”

Babb settled for second and said after that race that he knew fairly early that he would have trouble holding Wallace off.

“I fired alright, but about four laps into it I started getting a little loose in the corners,” said Babb, who extended his lead in the series standings with his second consecutive runner-up finish. “I just wasn’t on the money and Wendell was. He got by me in traffic and he was gone. Wendell’s really good when it comes to these conditions and he was really good tonight.”

Notes: Wallace’s Victory Circle Chassis is sponsored by Triple A Diesel Service and Wincrest Farms. ... The victory is Wallace’s first at Clarksville since he swept the track’s two-race Toilet Bowl Classic in 2009. ... The race was slowed by just one caution when defending series champion Jason Feger of Bloomington, Ill., went for a spin on lap three. ... Sixteen cars finished the race with 10 of those on the lead lap. ... The event was the 15th or 25 scheduled races on the tour. ... The Summernationals moves to Tri-State Speedway in Haubstadt, Ind., Sunday for a $5,000-to-win event.

In a redraw among heat race winners, Shannon Babb will start from the pole of tonight's 40-lap main event. Terry English will start alongside Babb while Wendell Wallace and Kent Robinson will share the second row. ... The race's provisional starters will be Scott James, Caleb Ashby, Dillan White and Jeff Walston.

Clayton Miller moved by polesitter Tim Lance midway through the B-Main and pulled away to the victory. He'll transfer to the main event along with Lance, who held off Rodney Melvin to finish second.

Wendell Wallace scored a convincing victory in the second heat race, winning by more than a straightaway over runner-up Donny Walden. Tony Morris ran third while Josh Harris held of Clayton Miller for the fourth and final transfer position. The race was slowed by one caution for a three-car pileup on the first attempt to start the race.

Terry English started from the pole and led every lap on his way to winning the first heat race. Jack Sullivan trailed English the entire distance to score the runner-up finish with Dennis Erb Jr. third. Charles Zimmerman held off Tim Lance by just a few inches at the finish line for the fourth and final transfer position. The race was slowed by multiple cautions, all caused by spins by drivers back in the pack. Just six of the race's 11 starters were running at the finish.

Terry English of Benton, Ky., was the fastest of 44 qualifiers Saturday night at Clarksville Speedway during time trials for the 15th round of the 25-race UMP DIRTcar Summernationals. English’s lap of 13.733 seconds puts him on the pole of the first of four heat races coming up at the quarter-mile oval.

The top four finishers in each heat race will transfer to the 40-lap, $10,000-to-win main event. Two C-Mains will each send two drivers to the B-Main, which will send its top two finishers to the feature. Four provisional starters will fill the remainder of the 22-car field.

Shannon Babb of Moweaqua, Ill., continues to extend his lead in the points standing as he chases his third series title. With his runner-up finish Friday night at Farmer City (Ill.) Raceway, Babb now holds a 135 point lead over Scott James of Lawrenceburg, Ind. Defending Series champion Jason Feger of Bloomington, Ill., is third, 212 points out of the lead. Three-time champion Dennis Erb Jr. (-220) of Carpentersville, Ill., and Brian Shirley (-235) of Chatham, Ill., round out the current top five. ... Ryan Unzicker of El Paso, Ill., has crew chief Brian Redmon back for the first time since the July 2 event at I-55 Raceway in Pevely, Mo. Redmon missed the past week while recovering from burns he suffered when a radiator hose blew off Unzicker’s racecar in the I-55 pit area. ... Wendell Wallace of Batesville, Ark., is making his first Summernationals appearance of 2011 at Clarksville. ... Brandon Sheppard of New Berlin, Ill., is the most recent winner on the tour. He earned $10,000 for winning Friday night’s race at Farmer City. ... Jack Sullivan of Greenbrier, Ark., won last year’s event at Clarksville.