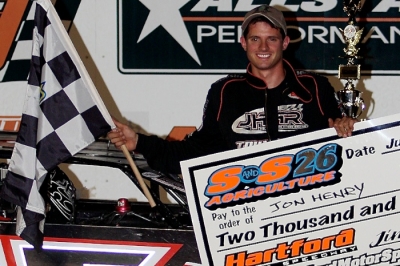 J.T. Hotovy of Covert, Mich., was second followed by Brian Ruhlman of Clarklake, Mich. Ryan VanderVeen of Six Lakes, Mich., and Chad White of Coloma, Mich. rounded out the top five. Sixth-finishing Guy Volk of Portage, Ind., was the only other driver on the lead lap in the 19-car field.

Notes: Henry is sponsored by Truman Quarter Horses and Wide Open Graphics. ... Henry's previous ALMS victory came Sept. 4, 2010, at Oakshade Raceway in Wauseon, Ohio. ... Over Fourth of July weekend, Henry won at Attica and Oakshade and was leading a Millstream Speedway in Findlay, Ohio, when loss of fuel pressure forced him out. ... The Hartford event was a make up of a June 24 rainout. ... The tour returns to Hartford in two weeks for the $4,700-to-win Lane 47 on July 22.