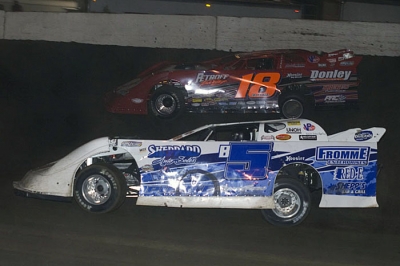 The 18-year-old, second-generation driver earned $10,000 at his home track after outdueling two-time series champion and current points leader Shannon Babb of Moweaqua, Ill., in a thrilling race-long battle that saw the two drivers swap the lead five times throughout the 40-lap race.

“This track has always been one of the toughest tracks we come to, especially on the Summernationals,” said Sheppard, who also beat Babb to earn his victory at Lincoln on Sunday that paid $5,000. “This was always one of my biggest goals to win Summernationals here.”

Babb started third and used a strong run off turn two on the opening lap to move by polesitter Scott James of Lawrenceburg, Ind. Sheppard started directly behind Babb in the fifth and followed his lap-one move to jump to the second position.

Sheppard first pulled alongside Babb on lap three, setting off a back-and-forth battle that kept the near-capacity crowd on their feet as the two drivers raced side-by-side for the better part of half of the race.

The low-running Sheppard cleared Babb on lap 15 and opened up a slight advantage before the race’s only caution on lap 22. The restart allowed Babb to pull back alongside Sheppard with a high-side charge and he retook the top spot on lap 29.

But Sheppard stayed glued to the bottom around the quarter-mile racetrack and went back out front for good when Babb’s high line was obstructed by slower traffic on lap 36. Sheppard worked the low groove to perfection in the final four laps, pulling away the victory as Babb struggled to pass slower cars.

“We got the bottom kind of figured out at these tracks,” Sheppard said. “Our biggest deal is we can rotate the bottom a lot better than those guys. Babb was better than me on the top. He could keep his momentum up, but I got lucky with those lap cars up there in his line.”

Babb settled for the runner-up finish, his eighth top-five effort in the past 10 series events. After the race he said it was tire choice that kept him from reaching victory lane.

“I cost myself the race because I put too hard of tires on. The track was really good tonight and the bottom was there,” said Babb, who increased his already comfortable margin over James in the series standings. “After Brandon passed me, on that restart I got back to the top and we made it work there for a couple laps. When we come to the (slower) cars I knew I had to go to the bottom. I went down there, but the hard tires just wouldn’t dig."

Notes: Sheppard's Pierce Race Car is sponsored by Fromme Enterprises, Sheppard's Car Crushing and Shepp's Bar & Grill. ... The lap-22 caution was caused by a spin by Matt Miller of Whitehouse, Ohio. ... Twenty of the race’s 22 starters were running at the finish with 17 cars on the lead lap. ... Defending series champion Jason Feger of Bloomington, Ill., was the night’s fastest qualifier, but had to use a provisional to make the feature after struggling in his heat race. He was one of the race’s biggest movers, advancing from 19th to eighth at the finish. ... The series heads to Clarksville (Tenn.) Speedway on Saturday for another $10,000-to-win event.

The tires Trenton, Ill., driver Michael Kloos used to win the June 29 series event at Belle-Clair Speedway in Belleville, Ill., were determined to have been illegally altered by chemical lab tests, Tom Deery, president of UMP’s parent company World Racing group, said Thursday night at Farmer City. Kloos has appealed the test results and will remain the Belle-Clair winner at least until the appeal process is complete, Deery added. No details regarding the appeal process were provided, but Deery did say that Kloos could be facing a fine and suspension along with the disqualification of his $5,000 victory if the test results are upheld. Ryan Unzicker of El Paso, Ill., was the runner-up in the event and stands to be declared the race’s winner. Kloos is not competing at Farmer City.

In a redraw among heat race winners, Scott James will start from the pole of tonight's main event. Jack Sullivan will start second while points leader Shannon Babb and 14-year-old Bobby Pierce will share the second row. ... Jason Feger and Kent Robinson will use series provisionals to start the main event. Eric Smith is the track provisional and Ryan Unzicker is the UMP national points provisional.

Polesitter Scott Bull won the B-Main to earn a starting spot in the main event while Jimmy Dehm finished second to also transfer.

Shannon Babb drove around Dan Schlieper for the lead with two laps remaining in the third heat race and pulled away to the victory. Schlieper started on the outside pole and led the first eight laps of the caution-free race before settling for the runner-up finish with Matt Miller third. Derek Chandler and Mike Glasscock battled side-by-side for the fourth position in the closing laps, but heavy contact in turn for on the final lap left both drivers in the infield short of the finish line. Dillan White ended up fourth and will make the main event.

Second-starting Bobby Pierce moved to the lead on the start of the second heat race and led every lap for the victory. Mike Spatola used the high side of the racetrack to advance from sixth to second at the finish with Kevin Weaver third. Polesitter Darren Friedman held off a hard-charging Eric Smith by less than a car length to finish fourth and will also transfer to the main event.

Jack Sullivan moved from his fifth starting position to the front and picked up the victory in the first heat race. Sullivan followed third-starting Brian Shirley to the front on the start of the race, moving by polesitter Jason Feger in the first corner. Sullivan moved by Shirley one lap later and led the remainder of the 10-lap prelim. Brandon Sheppard finished second while Mark Burgtorf moved from sixth to third. Shirley faded after leading the first lap, but held off Scott Bull and Richie Hedrick for the fourth and final transfer position at the finish. After falling to third on the opening lap, Feger spun on lap two and ended up eighth.

Defending series champion Jason Feger of Bloomington, Ill., was the fastest of 40 qualifiers Friday at Farmer City Raceway during time trials for the 15th leg of the 25-race UMP DIRTcar Summernationals. Feger posted a lap of 13.072 seconds on the quarter-mile oval to earn the pole position for the first of four heat races coming up.

With his victory in the most recent series event Wednesday night at Peoria (Ill.) Speedway, two-time series champion Shannon Babb of Moweaqua, Ill., increased his lead in the series standings to 125 points over Lawrenceburg, Ind., driver Scott James. Defending series champion Jason Feger of Bloomington, Ill., is third in the standings, 188 out of the lead. Brian Shirley (-203) of Chatham, Ill., and Dennis Erb Jr. (-205) of Carpentersville, Ill., round out the current top five. ... Both Shirley and Erb were going to miss Thursday night’s scheduled series race at Macon (Ill.) Speedway, but will keep their perfect attendance on the series through at least tonight thanks to the event being rained out. ... Thursday’s event was the sixth race of the first 20 on the original schedule to be rained out.