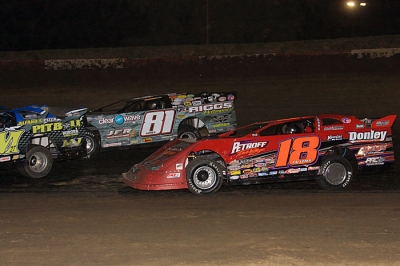 Shannon Babb (18) moved by Scott James (81)in traffic to win at Peoria. (stlracingphotos.com)

PEORIA, Ill. (July 6) – Taking advantage of a miscue by Scott James in slower traffic, series points leader Shannon Babb of Moweaqua, Ill., moved to the lead on lap 25 of Wednesday night’s UMP DIRTcar Summernationals feature at Peoria Speedway and led the remainder of the 40-lap race to score a $5,000 victory during the 14th leg of the 25-race tour. | Complete Summernationals coverage

Babb started third and chased down James of Lawrenceburg, Ind., when traffic came into play midway through the race. Babb was within striking distance when James slipped out of the quarter-mile oval’s dominant bottom groove while trying to lap Mike Provenzano on lap 24. The slip allowed Babb to pull alongside, and he completed the winning pass one lap later. He navigated traffic flawlessly during the remaining laps to pick up his third victory on the month-long series.

“Scott had the lead there, just got in behind a guy and kinda slipped up a little bit. He left the door open and I got underneath of him,” Babb said of the race’s key moment. “Everybody’s about the same speed, you’re just trying to stay close to the leader in case something like that does happen. Sometimes it don’t, but it did tonight.”

The second-starting James led 20 laps after moving by Steidinger on the lap four, but struggled to find a way around Provenzano as Babb closed in. He even made contact with Provenzano’s back bumper a number of times as he tried to get him to move out of the preferred bottom groove on the locked-down racetrack. But the attempts proved futile, leaving James extremely frustrated after the race.

“They told him to get out of the way on the radio five times,” James said, referring to the race director’s directions to Provenzano over the one-way radio device. “It’s disappointing, very disappointing. I even bumped the guy five times and he never moved.”

The victory is Babb’s 10th top-five finish in 14 races on the tour this year and adds to the already comfortable margin he held over James and the rest of the series regulars coming into the event. Babb, the 2005 and 2006 series champion, says comfort and confidence in his race car is what’s helped him be so consistent as he chases his third series title.

“It just feels like this year I’m back to how I felt in ’05 and ’06,” Babb said of his performance. “I’m comfortable every time I go on the racetrack. I’m comfortable and I know what my car’s gonna do. That gives the edge and the confidence you need to shoot underneath a guy.”

Notes: Babb’s Victory Circle by Moyer Race Car is sponsored by Petroff Towing, Donley Trucking, Allstar Performance and Performance Rod & Custom. ... The win is Babb’s 65 Summernationals victory of his career and his third series victory at Peoria. ... The race was slowed by one caution when Jack Sullivan of Greenbrier, Ark., had a flat tire on lap five. ... The series moves to the fifth-mile Macon (Ill.) Speedway Thursday for the $5,000-to-win Herald & Review 100.

After a redraw among heat race winners, Wes Steidinger will start from the pole of tonight's 40-lap main event with Scott James alongside. Shannon Babb and Jeep Van Wormer will share the second row. ... Brian Shirley and Dennis Erb Jr. will use Summernationals series provisionals to start the main event. Todd Bennett is the track provisional and Ryan Unzicker is the UMP national points provisional.

Mike Spatola started second and led every lap to pick up the B-Main victory. He'll transfer to the main event along with runner-up finisher Doug Drown.

Scott James won the fourth heat race after leading every lap for the pole. Donny Walden started fourth and moved by Jason Feger and Scott Schmitt on his way to finishing second in another race that ran caution-free. Feger ended up third with Schmitt holding down the fourth and final transfer position at the finish.

After inheriting the pole-starting position when Billy Drake lost an engine on the first attempt to start the race, Wes Steidinger led flag-to-flag to win the third heat race over fourth-starting Steve Lance Jr. Brandon Sheppard made a late charge to finish third while Jack Sullivan moved by Bobby Pierce late in the race to finish fourth and pick up the final transfer finish.

Shannon Babb started from the pole and led every lap on his way to winning the caution-free second heat race. Third-starting Matt Miller fell back to fifth on the start of the 10-lap race, but used the high side to work his way back to second at the finish. Tim Lance finished third while Kevin Weaver held off Mike Spatola to finish fourth and also transfer to the feature.

Polesitter Jeep Van Wormer grabbed the lead on the start of the first heat race and held off Mike Mullvain the entire distance to score the victory. Mullvain settled for second in the caution-free prelim while Rusty Schlenk moved forward on the high side to finish third after starting seventh. Mike Provenzane finished in the fourth and final transfer position.

Series points leader Shannon Babb of Moweaqua, Ill., was fastest of 38 qualifiers Wednesday at Peoria Speedway during time trials for round 14 of the 25-race UMP DIRTcar Summernationals. Babb’s lap of 12.712 seconds puts him on the pole for the second of four heat races coming up at the quarter-mile oval.

The top four finishers from each heat race will advance to tonight’s 40-lap main event. The C-Main will send four cars to the B-Main, which will transfer another two cars to the feature. Four provisional starters will fill the remainder of the 22-car field.

Shannon Babb of Moweaqua, Ill., will look to bounce back tonight after a 12th-place effort in the previous series event Monday at 34 Raceway in West Burlington, Iowa. Even with the sub-par finish, Babb still holds a commanding lead in the series standings with 824 points. Scott James (704) of Lawrenceburg, Ind., is second followed by defending series champion Jason Feger (668) of Bloomington, Ill., Brian Shirley (657) of Chatham, Ill., and three-time series champ Dennis Erb Jr. (655) of Carpentersville, Ill. ... Erb cracked the top five in the standings for the first time following his third-place finish in Monday’s event at 34 Raceway. It’s his first appearance in the top five this season. ... Ryan Unzicker of El Paso, Ill., dropped out of the top five after more bad luck struck the 29-year-old driver at 34 Raceway. He was scheduled to start fifth in that event, but a blown engine forced him to start from the tail in Jack Sullivan’s back up car. He made just one lap and pulled to the pits. Down to just one car and one engine, Unzicker, who leads UMP’s Late Model national points standings, said he may drop off of the tour at some point during the next week to focus on preparing his team to continue to chase the national points title for the remainder of the season. ... One positive note for Unzicker is the possible early return of his crew chief Brian Redmon, who was burnt by scalding hot water when a radiator hose blew off Unzicker’s car Saturday in the pit area I-55 Raceway. Originally expected to miss two weeks to a month, Redmon could now come back as early as Friday, according to Unizcker. ... Test results from tire samples taken from the tires Michael Kloos of Trenton, Ill., used to win the tour’s event at Belle-Clair Speedway in Belleville, Ill., have been returned to series director Sam Driggers, who says he’ll release a statement regarding the results Thursday.