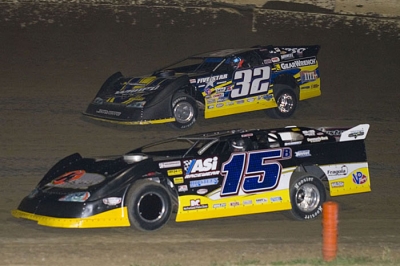 Birkhofer dominated the caution-free 40-lapper, opening up more than a straightaway lead on the 3/8-mile racetrack on his way to scoring the seventh series victory of his career.

The triumph comes after Birkhofer had a chance to win a series race June 24 at Tri-City Speedway in Granite City, Ill., taken away when his left-front wheel fell off his race car during the race’s parade laps. Birkhofer was scheduled to start third in that $10,000-to-win event before a miscue resulted in the lugnuts on the wheel not getting tightened before the race.

“It just feels good to run good again,” Birkhofer said of his victory. “I was really frustrated (after Tri-City). There’s a couple guys that help me, and I couldn’t come in and blame them because they’re just volunteer guys that try to help me out. I just put it on myself.

“The car’s been pretty decent all year, just a matter of dumb luck on my part and some other things that have happened I just gotta keep plugging away.”

The triumph is Birkhofer’s second special-event victory this year at 34 Raceway, which is located less than an hour south of his home. He also scored a $10,000 Lucas Oil Late Model Dirt Series victory at the 3/8-mile racetrack in May.

The only challenge for the pole-starting Birkhofer came from second-starting Chris Simpson of Oxford, Iowa, during the opening laps. But after clearing Simpson, Birkhofer never looked back, and navigated slower traffic in the closing laps to pick up the victory.

Jack Sullivan of Greenbrier, Ark., moved to second midway through the race and tried to close the gap on Birkhofer. But even the slower traffic couldn’t slow down the leader. Sullivan settled for second, earning his second consecutive top-five finish on the tour. Three-time series champion Dennis Erb Jr. of Carpentersville, Ill., finished third with eighth-starting Jeep Van Wormer of Pinconning, Mich., fourth.

Defending series champion Jason Feger of Bloomington, Ill., started ninth and used a strong run on the high side midway through the race to move up to fourth. He ran down Erb and briefly challenged for third, but faded late and dropped to fifth at the finish.

Notes: Birkhofer's MB Customs car has a Pro Power Engine and sponsorship from J&J Steel, Zens Flooring, ASi Raceway and VP Fuels. ... The event was the first Summernationals race at 34 Raceway since 2006. Current series points leader Shannon Babb of Moweaqua, Ill., won that event. He was 12th Monday. ... Eighteen cars finished the race with 13 on the lead lap. ... The race was completed in less than 12 minutes. ... The series takes a day off Tuesday before heading to Peoria (Ill.) Speedway on Wednesday.

In a redraw among heat race winners, Brian Birkhofer will start from the pole of tonight's main event. Chris Simpson will start second with Jack Sullivan third. ... Kent Robinson and Scott Schmitt will use series provisionals to start the feature while track provisionals went to Denny Woodworth, Jerry Lierly and Tom Bowling Jr.

Bobby Pierce led every lap of the C-Main to earn the win and a starting spot in the main event. Wes Steidinger and Mark Burgtorf finished second and third to also transfer. Kent Robinson ran second nearly the entire race, but fell out late with mechanical problems.

Chris Simpson powered around polesitter Donny Walden in turns one and two on the opening lap of the third heat race and led every lap to win the caution-free prelim. Walden finished second, nearly a straightaway behind Simpson with Jason Feger third. Matt Miller moved by Dillan White on the final lap to finish fourth. White was fifth and will also make the main event.

Jack Sullivan grabbed the lead over polesitter Ryan Unzicker on the start of the second heat race and pulled away to a comfortable margin to score the victory. Unzicker finished second while Jeep Van Wormer held off Scott James to finish third. Behind James, Brandon Sheppard was fourth with Kent Robinson finishing fifth to also make the main event. Sheppard caused the race's only caution when he slowed at the top of turn two on the opening lap.

Polesitter Brian Birkhofer led every lap on his way to scoring a convincing victory in the first of three heat races. Birkhofer and second-starting Biran Shirley got together in turn one on the opening lap, causing Shirley to briefly drop back to fourth. He battled back and finished a distant second in the caution-free race. Dennis Erb Jr. and Shannon Babb swapped the third position multiple times in the final two laps with Erb edging ahead at the finish. Babb finished fourth while Chad Simpson held off Bobby Pierce for the fifth and final transfer position.

Brian Birkhofer of Muscatine, Iowa topped 26 qualifiers Monday at 34 Raceway during time trials for the 13th round of the 25-race UMP DIRTcar Summernationals. Birkhofer’s lap of 15.502 seconds puts him on the pole of the first of three heat races coming up at the 3/8-mile oval.

Other heat race polesitters after group qualifying are Ryan Unzicker of El Paso, Ill., and Donny Walden of Towanda, Ill.

The top five finishers from each heat race will transfer to tonight’s 40-lap, $5,000-to-win main event with a C-Main transferring three more drivers. Provisional starters will round out the 22-car field.

Riding the momentum of four consecutive top-five finishes, two-time series champion Shannon Babb of Moweaqua, Ill., leads the series standings with 784 points. Scott James (659) of Lawrenceburg, Ind., is second followed by defending series champion Jason Feger (612) of Bloomington, Ill., Brian Shirley (610) of Chatham, Ill., and Ryan Unzicker (602) of El Paso, Ill. ... The event marks the first Summernationals race at 34 Raceway since 2006. Babb was the winner of that event. ... Brian Birkhofer of Muscatine, Iowa is making his first appearance since the June 24 race at Tri-City Speedway in Granite City, Ill. He won a Lucas Oil Late Model Dirt Series event at 34 Raceway in May. ... Brandon Sheppard of New Berlin, Ill., is the most recent winner on the series. He earned $5,000 for his first series victory Sunday at Lincoln (Ill.) Speedway. Sheppard, 18, is the youngest winner in the tour’s history.