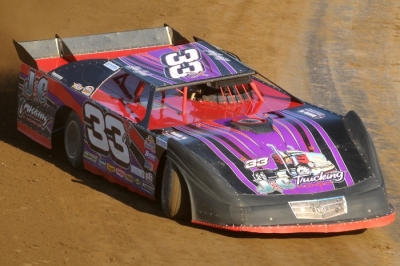 Adam Hensel's No. 33x was up to the task at Eagle Valley Speedway. (chrisburback.com)

The first start was called back when Hensel was slow getting off the line, but he took control on the second start and led Redetzke, Mars, Prochnow and Cryderman in the early laps.

Jake Hartung's lap-five spin reset the field, and Hensel kept his pursuers in check until the halfway point, when Jim Rychtik's car came to rest against the frontstretch wall. Rychtik was fine, but his night was over.

Hensel pulled away to a comfortable lead on the next restart, but with 10 laps remaining, traffic loomed ahead. But Hensel stayed in command while Mars dropped out, handing second to Redetzke in the final laps.