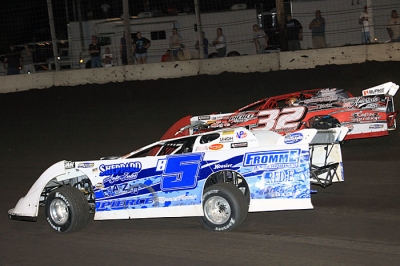 LINCOLN, Ill. (July 3) – Turning back multiple challenges from a driver he grew up watching dominate the UMP DIRTcar Summernationals, 18-year-old Brandon Sheppard of New Berlin, Ill., held off two-time series champion Shannon Babb of Moweaqua, Ill., during the second half of Sunday’s 40-lap Summernationals feature at Lincoln Speedway and earned $5,000 the first series victory of his career. | Complete Summernationals coverage

With his breakthrough triumph, Sheppard, who grew up traveling to Summernationals races with his Late Model racing father Steve Sheppard Jr., became the tour’s youngest winner and also became the fourth first-time winner on the tour in 2011.

“It feels amazing to win on the Summernationals cause if I haven’t been racing on the Summernationals, I’ve been coming with my dad for six or seven years now. It’s finally all starting to work out for me,” said Sheppard, who has followed the month-long tour nearly fulltime since 2009. “Last year I was kinda questionable and it was pretty tough. It’s really tough this year because there’s a lot of competition at these tracks, but I knew going into this year we had a pretty good chance at winning.”

The second-starting Sheppard shared the front row with fellow teenage driver Bobby Pierce of Oakwood, Ill., and trailed Pierce for the first two laps before moving to the point following the race’s first restart on lap three.

Sheppard pulled away from Pierce once out front, while Babb worked his way forward from the ninth starting position. Babb made his way to second just before the halfway point and began to apply heavy pressure as he and Sheppard raced tight around the bottom of the quarter-mile racetrack. Babb pulled alongside Sheppard on a number of occasions, but Sheppard turned back each challenge.

Babb’s best opportunity to take the lead came as the two drivers caught the slower car of Roger Brickler of Springfield, Ill., with three laps remaining in the race. Sheppard attempted to drive under Brickler in turns one and two, while Babb jumped to the high side. A bobble by Brickler forced Sheppard to check up, opening the door for Babb to move by on the top. But just as Babb pulled alongside, the slowing car of El Paso, Ill., driver Ryan Unzicker brought out the race’s final caution.

“I was waiting for him to make the first move,” Babb said of his battle with Sheppard in traffic. “He rode low and slow in the lead and led it the whole time. I was waiting for the traffic to come, and the caution came out.”

As he had done the entire race, Sheppard protected the bottom groove during the final three-lap run to the finish, and held on to score the victory. Babb, who leads the series standings after 12 of 25 events, finished second to earn his fourth consecutive top-five finish. Jack Sullivan of Greenbrier, Ark., finished third while Matt Miller of Waterhouse, Ohio, used a strong run on the high side of the racetrack to move up to fourth late in the race. Jeep Van Wormer of Pinconning, Mich., advanced from the 10th starting position to finish fifth.

Notes: Sheppard's Pierce Race Car is sponsored by Fromme Enterprises, Sheppard's Car Crushing and Shepp's Bar & Grill. ... The race was slowed by six cautions, five of which came before the halfway point. ... Fifteen cars were running at the finish with 13 on the lead lap. ... The $5,000 payday matches Sheppard’s highest paying victory, which came in a Northern Allstars Late Model Series event at I-55 Raceway in Pevely, Mo., in June. ... The 14-year-old Pierce ended up eighth after starting from the pole. ... Defending series champion Jason Feger of Bloomington, Ill., drove into the top five early in the race before suffering a flat right-rear tire. After pitting under caution for a new tire, he quickly drove back into the top 10, but was slowed by another flat. He ended up 16th. ... The series moves to 34 Raceway in West Burlington, Iowa, on Monday for another $5,000-to-win event.

Brian Dively moved to the lead on the start of the B-Main and led every lap to score the victory and earn a starting spot in the main event. Australian driver Jason Oldfield finished second to qualify for his first Summernationals feature while Eric Smith finished third to also transfer. The third transfer position is in place of the track provisional. Shane Garrison went for a wild ride on the opening lap of the race, rolling multiple times on the front straightaway. He was uninjured.

In the redraw among heat race winners, Bobby Pierce will start on the pole of the main event with Brandon Sheppard alongside. Matt Miller and Mike Spatola will share the second row. ... Tonight's C-Main has been scratched, and the B-Main will roll after a modified consy.

Polesitter Matt Miller grabbed the lead on the start of the fourth heat race and led every lap on his way to winning the caution-free prelim. Brian Shirley finished a close second while Ryan Unzicker advanced from his fifth starting position to finish third. Scott James moved from seventh to fourth at the finish to also transfer to the main event. Second-starting Dillan White struggled throughout the race and dropped to seventh by the finish.

After inheriting the lead when polesitter Jason Feger scraped the wall midway through the second heat race, fourth-starting Bobby Pierce survived a late battle with Jeep Van Wormer and a resurgent Feger to win the second heat race. Feger moved to the lead on the start of the race and opened a comfortable lead before hitting the turn-four wall around halfway. He fell to third, but recovered on the high side to finish second, just behind the low-running Pierce. Jeep Van Wormer finished a close third with Wes Steiding finishing fourth to also transfer to the main event.

Third-starting Mike Spatola moved by front-row starters Shannon Babb and Kevin Weaver on the opening lap of the first heat race and held off Roger Brickler and Babb in a thrilling race-long battle to score the victory. The fourth-starting Brickler followed Spatola to the front early and edged ahead to lead a couple laps during the middle portions of the race. But the high-running Spatola battled back and claimed the victory by less the a car length over both the runner-up finishing Brickler and third-finishing Babb. Weaver edged Jason Oldfield in a side-by-side finish for the fourth and final transfer position.

Defending series champion Jason Feger of Bloomington, Ill., was the fastest of 35 qualifiers Sunday at Lincoln Speedway during time trials for the 12th leg of the 25-race UMP DIRTcar Summernationals. Feger will start on the pole of the second of four heat races coming up at the quarter-mile oval in central Illinois.

The top four finishers from each of four heat races will transfer to the main event. The top two finishers from the B-Main advance to round out the 22-car feature lineup along with four provisional starters. The night’s 40-lap feature pays $5,000 to the winner.

Ryan Unzicker of El Paso, Ill., will be without crew chief Brian Redmon for up to a month while Redmon recovers from burns suffered Saturday night when a radiator hose blew off Unzicker’s race car in the pit area of I-55 Raceway in Pevley, Mo. “Brian’s OK, but he’s definitely gonna need some time to recover,” Unzicker said as he prepared to compete Sunday at Lincoln Speedway. “He really wants to be out here with us, but I’m not letting him come back for at least two weeks, maybe even a month.” Unzicker, who himself suffered minor burns in the incident, added that not having Redmon on the road with him may cause him to drop off the Summernationals tour following Wednesday’s event at Peoria (Ill.) Speedway if he is unable to find more help. ... Brandon Sheppard of New Berlin, Ill., wasn’t very happy following a mid-race tangle with Will Vaught of Crane, Mo., in Saturday night’s feature at I-55. “He pretty much just spun me out,” Sheppard, who had advanced from 11th to fourth, said Sunday at Lincoln. “I’m not saying he meant to do it, but you would think he would come say something if it was an accident. He packed up and left (after the race) without saying anything, so I don’t know what that tells ya.” Vaught is not competing at Lincoln. ... Billy Moyer Jr. of Batesville, Ark., appears to have had enough of the Summernationals this year. Moyer, who was in the middle of his second year following the tour, is not entered into Sunday’s race at Lincoln. ... Shannon Babb of Moweaqua, Ill., has built a 99-point lead over Scott James of Lawrenceburg, Ind., in the series points standings. Defending series champion Jason Feger of Bloomington, Ill., is third, 137 markers out of the lead.