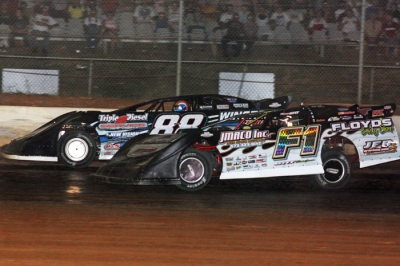 WEST PLAINS, Mo. (July 2) — Winning at one of his favorite tracks, Wendell Wallace of Batesville, Ark., stole the point from race-long leader Jeff Floyd of Walnut Ridge, Ark., with two laps remaining Saturday for a $3,000 victory.

Floyd, who started outside the front row and got the jump on polesitter Dustin Mooneyham of Verona, Mo., settled for second while Stacy Taylor of Jacksonville, Ark., was third. R.C. Whitwell of Tucson, Ariz., the winner of Friday's opener, rallied from his 15th starting spot for fourth and Bill Frye of Greenbrier, Ark., rounded out the top five. Floyd was aiming for his first MARS victory at West Plains since the inaugural series season in 2000.