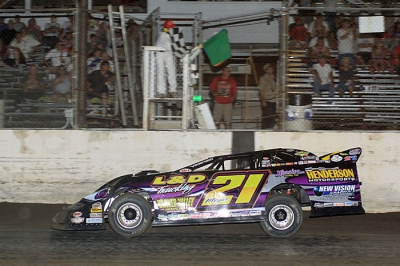 PEVELY, Mo. (July 2) – A month ago, Billy Moyer was so slow in a Northern Allstars Late Model Series event at I-55 Raceway that race winner Brandon Sheppard nearly lapped him. Saturday night the Hall of Famer from Batesville, Ark., returned with vengeance to the St. Louis-area racetrack and found sweet redemption in the form of a $10,000 victory in the 11th leg of the 25-race UMP DIRTcar Summernationals.

After swapping the lead multiple times with series points leader Shannon Babb of Moweaqua, Ill., early in the 40-lap race, Moyer took over the top spot for good on lap 14 and led the remaining distance on his way to recording the 79th Summernationals victory of his career and his first on the tour in 2011.

“We learned a lesson the last time we were here. We just made some wrong decisions last time based on what we did before,” said Moyer, who has been a dominant driver at I-55 throughout most of his career. “This place when you see that black coming it’s slick, slick out there. But it seems like there’s more bottom the last couple times we’ve been here than what there used to be a year or two ago. We had to get in our game book.”

The fourth-starting Moyer battled with polesitter Dennis Erb Jr. of Carpentersville, Ill., and the fifth-starting Babb early in the race with each of the three drivers spending time at the front. Erb led the first four circuits before Babb took over on lap five. Moyer briefly took over the lead on lap nine, but Babb went back ahead the very next lap.

Moyer took advantage of a restart with 13 laps complete to move by Babb for good, diving to the inside of Babb when he struggled to get through turns one and two following the restart.

“That’s the joy of running behind a guy. I kinda felt like I knew where his weak spot was,” Moyer said of his move to get by Babb. “If you overrun that corner you couldn’t steer right there. I seen that happening to him before that start. I was just gonna try something there and it worked.”

Erb, a three-time Summernationals champion, faded to fourth midway through race, but battled back and moved by Babb and Matt Miller of Whitehouse, Ohio, late in the race to finish second and earn his first top five on the tour this season.

Miller and Babb battled side-by-side for third in the closing laps with Miller taking the position by less than a car length at the finish. Babb finished fourth, extending his lead in the points standings with his eighth top 10 on the tour this year. Austin Dillon of Welcome, N.C., finished fifth for his second top-five finish in three career series starts.

Notes: Moyer's Victory Circle Chassis has a Clements Racing Engine and sponsorship from L&D Trucking, Henderson Motorsports, Banner Valley Hauling and Minx Show Palace. ... The race was slowed by seven cautions, with all but one coming in the first half of the race. ... Sixteen cars were running at the finish, with 14 on the lead lap. ... Sheppard of New Berlin, Ill., started 11th and ran as high as fourth before tangling with Will Vaught of Crane, Mo. ... The Summernationals return to action Sunday with a $5,000-to-win event at Lincoln (Ill.) Speedway.

After a redraw among heat winners, Dennis Erb Jr. will start from the pole in the main event with Will Vaught alongside. Brian Shirley and Billy Moyer will share the second row. ... Six drivers will start the main event via provisionals. Jason Feger and Dillan White received series provisionals while Ryan Unzicker and Jason McBride were awarded UMP national points provisionals. Dewayne Kiefer and Mark Voigt are the two track provisionals. ... Track officials have decided to take an intermission and will run a support division feature before the 40-lap Late Model main event.

Craig Smith and Michael Kloos raced side-by-side for nearly the entire B-Main before Smith edged ahead at the finish line to score the victory. Kloos settled for second and will also make the main event. Among those missing transfer finishes were Dan Schlieper, Mike Spatola and Donny Walden.

Track medical personnel was called to the pit area of El Paso, Ill., driver Ryan Unzicker after qualifying when a blown radiator hose on Unzicker’s race car resulted in Unzicker and crew chief Brian Redmon being burned by scalding hot water. Neither Unzicker nor Redmon were seriously injured and both initially refused medical care. After persuasion from the track’s medical crew, Redmon was transported by ambulance to a nearby hospital to receive treatment for burns on his right shoulder. Unzicker received minor burns to his head and face, but still plans to compete tonight.

Polesitter Brian Shirley moved to the lead on the start of the fourth heat race and led every lap on his way to scoring a convincing victory. Austin Dillon fell to fourth on the first lap, but battled his way back to the second position at the finish. Kent Robinson finished third while Jeff Johns overtook Michael Kloos on the final lap to earn the fourth and final transfer finish. The race was slowed by one caution when Ron McQuerry spun exiting turn two on lap six.

Polesitter Dennis Erb Jr. moved to the lead on the start of the third heat race and held off multiple challenges from Matt Miller to score the victory. Miller settled for second with Brandon Sheppard third and Bobby Pierce in the fourth and final transfer position. Dan Schlieper was scheduled to start third, but because he failed to cross the scales following his wreck on his second qualifying lap, he was sent to the tail. He finished sixth.

Will Vaught came out on top of a three-wide battle with Scott James and Tim Manville on the first lap of the second heat race and led all 10 laps for the victory. Jack Sullivan advanced from fourth to second midway through the race and held off James by just a few inches at the finish line. James was third with Billy Moyer Jr. a distant fourth to also transfer to the main event. Manville ended up fifth after starting from the pole. Defending series champion Jason Feger started on the tail after blowing an engine in qualifying. He made it halfway through the field early, but fell to eighth late in the race.

Billy Moyer pulled to the lead over polesitter Shannon Babb on the start of the first heat race and held on to a slight advantage for the entire distance of the caution-free prelim. Babb trailed Moyer all 10 laps and finished just a car lenght behind in the second position. Jeep Van Wormer turned back strong challenges from Randy Korte all race to finish third. Korte settled for the fourth and final transfer position at the finish.

Defending series champion Jason Feger of Bloomington, Ill., blew an engine in qualifying and will go to a backup car for the remainder of the night. ... A scrape with the turn-one wall left Dan Schlieper of Oak Creek, Wis., with heavy cosmetic damage to his Bloomquist Race Car. With minimal crew help, fellow drivers Dennis Erb Jr. of Carpentersville, Ill., and Jason McBride of Carbondale, Ill., helped to make repairs to Schlieper’s car and he should be ready to go in time to start third in the third heat race.

Series points leader Shannon Babb of Moweaqua, Ill., was fastest among 41 qualifiers Saturday at I-55 Raceway during time trials for the 11th leg of the 25-race UMP DIRTcar Summernationals. Babb’s lap of 12.623 seconds puts him on the pole of the first of four heat races coming up at the 3/8-mile oval.

Defending series champion Jason Feger of Bloomington, Ill., didn’t record a lap time after his car began trailing heavy smoke on his warm-up lap. Dan Schlieper of Oak Creek, Wis., got into the turn-one wall on his second lap. The incident didn’t appear to cause significant damage, and he was able to drive his race car back to the pit area.

Michael Kloos, the Trenton, Ill., driver that won Wednesday night’s series race at nearby Belle-Clair Speedway, confirmed Saturday afternoon that series officials took samples from the tires he used in Wednesday’s feature race to be sent to a lab for chemical testing. But the 27-year-old driver said that his tires were not illegally enhanced, and he isn’t worried that he’ll be stripped of the first Summernationals victory of his career. “We’re good,” Kloos said as he prepared to compete in Saturday’s race at I-55. “We’re confident they’ll come back OK.” Kloos, who drives for car owner Gary Gerstner, added that he is not involved in his race team’s tire preparation process, but that he “trusts completely” the crew member that preps his tires. Test results are expected to be returned by Tuesday, according to series director Sam Driggers. ... With his runner-up finish Friday night at Paducah International Raceway, Shannon Babb of Moweaqua, Ill., stretched his lead in the series standings to 78 points over Scott James of Lawrenceburg, Ind. Defending series champion Jason Feger of Bloomington, Ill., is third in the standings, 117 points out of the lead. ... After once again being plagued by electrical problems while leading his heat race Friday night, Ryan Unzicker of El Paso, Ill., is hoping the pesky issue has been solved after he and his crew stayed up to 4 a.m. Saturday morning replacing the entire electrical system on his MasterSbilt Race Car. ... Track and series officials pushed back the start of the night’s program 30 minutes to allow for extra track-prepping time after high temperatures and extreme sunlight baked the track’s surface all day Saturday. Hot laps are scheduled to start at 7.