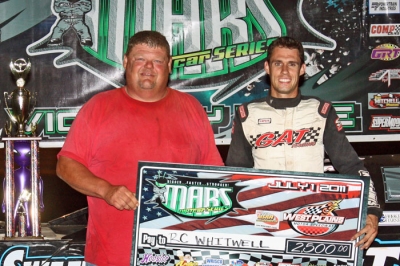 Whitwell started alongside polesitter Wendell Wallace of Batesville, Ark., in the 25-lapper, and Wallace took control at the outset and appeared to have things going his way.

But Whitwell held the second spot and began gaining ground on the slick surface at West Plains, reeling in the lead and making the winning pass on the 15th lap. He never looked back in racing to the checkers while Wallace settled for second.

Brad Looney of Republic, Mo., entered the event on a three-race MARS winning streak, but he wasn't a factor in starting and finishing 13th.