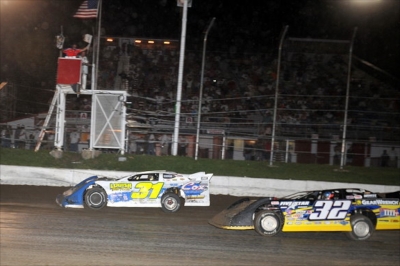 GREENWOOD, Neb. (July 1) — Jason Utter got three for the price of one in the first touring victory of his career.

The driver from Columbus Junction, Iowa, made a thrilling last-lap pass at I-80 Speedway on Friday to capture the Fourth of July weekend's Midwest Trifecta, earning $3,000 in a race co-sanctioned by Lucas Oil MLRA, NCRA DIRTcar and the Dart Corn Belt Clash. | Slideshow

Chris Simpson of Oxford, Iowa, led 29 laps at the 4/10-mile oval, but when the leader faced slower cars in the final laps, Utter moved up to challenge and took the lead exiting turn four heading for the checkered flag, nosing Simpson out at the line.

Chad Simpson of Mount Vernon, Iowa, the runner-up's older brother, was third to give youngest of the three tours, the Iowa-based Corn Belt Clash, a sweep of the top three positions.

The race marked Chris Simpson's second in a row where he led virtually the entire race but came up empty. At May 29's Alphabet Soup Classic, he led all but three laps when mechanical woes forced him out, handing the victory to his brother.