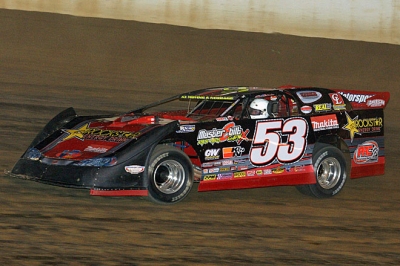 Ray Cook heads to a $12,000 victory in Summernationals action at Paducah. (kohlsracingphotos.com)

PADUCAH, Ky. (July 1) – Ray Cook experienced plenty of bad luck during the first half of 2011. But late in Friday night’s Chris Smith Memorial at Paducah International Raceway, the 39-year-old driver from Brasstown, N.C., finally had some luck go his way, and it helped him score a $12,000 victory at the high-banked 3/8-mile racetrack. | Complete Summernationals coverage

The pole-starting Cook controlled the first 38 laps of the 40-lap UMP DIRTcar Summernationals event, but allowed series points leader Shannon Babb of Moweaqua, Ill., to slip by when he pushed up the racetrack exiting turn two on lap 39. Cook pulled back alongside Babb in turns three and four, putting the two drivers side-by-side as they took the white flag.

Who would have come out on top of that final-lap battle will never be known as a caution for Will Vaught’s turn-four spin provided Cook with a much easier path to victory. With the lineup reverted to lap 38, Cook was back out front for the restart and held Babb off in the two-lap run to the finish to notch the second Summernationals victory of his career.

“When I pushed off of two I thought I had just gave the thing away,” said Cook, who prior to Friday’s race had just one victory in 2011. “We’ve had a rough year with bad luck things. Tonight, this is the most luck we’ve had go our way all year with the caution and the way it worked out. Who knows how it what would’ve happened on that last lap, but that caution put us back out front and it feels good to get a good win under our belt."

While the caution worked in Cook’s favor, Babb wasn’t so happy to see the race slowed on the final lap.

“I was definitely working on him there and it was getting interesting down in one and two. He slipped up and I got beside there. I didn’t want to see that caution,” Babb said. “The yellow come out at the wrong time, but that’s part of racing; it happens all the time.”

Dillon ran second for the majority of the race, and for a while appeared as though he had something for Cook in the closing laps. He used a turn-one slidejob on a lap-29 restart to briefly pull ahead of Cook, but Cook pulled back ahead exiting turn two.

Dillon made a similar attempt following a lap-34 restart, but a move to the lower groove of the racetrack by Cook broke Dillon’s momentum, causing him to drop two spots.

“It was just a shot at it just to see if we could come off the corner even with him and get down the back stretch,” Dillon said of the lap-29 move that allowed him to briefly move ahead of Cook. “The caution came out and I was thinking about it the whole time if I should do it again. Ray, he blocked me there on the bottom. That was the smart thing to do. If I was smarter I would have moved to the top.”

Notes: Cook's D&R Motorsports MasterSbilt Race Car has a Race Engine Design powerplant and is sponsored by Rockstar Energy Drink, Makita Power Tools, Hicks & Ingle Co. and PRC. ... Cook’s previous victory on the month-long tour came 14 years ago at Tennessee Motor Speedway in Baxter, Tenn., in 1997. ... Thirteen cars were running at the finish. ... The first-year race was in honor of the former car owner for long-time and now retired Paducah racer Gary Keeling. ... The event was the 10th-leg of the 25-race Summernationals. The series moves to I-55 Speedway in Pevely, Mo., Saturday night for a $10,000-to-win event.

After a redraw among heat winners, Ray Cook will start from the pole of tonight’s main event with Chris Wall alongside. Austin Dillon and Billy Moyer will share the second row. ... Provisional starters for the main event will be Ryan Unzicker, Jason Feger, Tim Brown and Brandon Sheppard. ... For the third time in four days electrical problems plagued Ryan Unzicker of El Paso, Ill. The mysterious problem that keeps occurring at inopportune times sent Unzicker to the pit area while leading his heat race. The same electrical-related problems caused Unzicker to fall from second to third during Tuesday’s feature at Lincoln Park Speedway in Putnamville, Ind., and kept him from competing in his heat race Thursday night at Clayhill Motorsports Park in Atwood, Tenn. The recurring problem is getting pretty frustrating for Unzicker and his team. “We’ve changed everything we can and it keeps happening,” one perplexed crew member said as they hurried to try to remedy the issue so Unzicker can use a provisional to start the main event. ... Like many drivers competing at Paducah tonight, Chris Wall of Springfield, La., is experiencing overheating problems with his engine. The hot weather is to blame for most of the overheating, but first-lap contact made the issue even worse for Wall in his heat race. “We knocked the front-end down and it cut off our air flow there,” Wall after holding off Brian Shirley of Chatham, Ill., to win the prelim. “I backed off a little to try not to hurt, so I think we’ll be OK.” Wall and his crew fixed the damage and believe they won’t have to deal with any overheating in the main event.

Austin Dillon won the fourth heat race after polesitter Ryan Unzicker fell out while leading. Tanner English took the early lead before Unzicker moved by on lap two. A caution for a spin by Jason Oldfield slowed the field on lap three and Unzicker pulled off the track before the race went back green. The fourth-starting Dillon overtook English following the restart and led the remainder of the race. Dan Schlieper also moved by English to finish second, shuffling English back to third at the finish. Jarryd hoshouser finished fourth and will also make the main event.

Defending race winner Billy Moyer started on the pole of the third heat and survived an early battle with second-starting Will Vaught to score the victory. Scott James snuck by Vaught on a restart with two laps remaining to finish second. Vaught ended up third while Dennis Erb Jr. advanced from his eighth starting position to finish fourth and transfer to the main event. The race was slowed by one caution with two laps remaining when Jeff Watson and Randy Sellers went for a spin in turn one. The incident sent Watson to the pits with a flat tire.

Ray Cook raced to a convincing victory in the second heat, leading every lap of the caution-free race. Polesitter Shannon Babb held off Jeep Van Wormer in a race-long battle for second. Van Wormer took third while Mike Spatola finished fourth after swapping the position with Matt Miller multiple times throughout the eight-lap race. Spatola will transfer to the main event while Miller will have to run a consolation race after finishing fifth.

Chris Wall moved to the lead on the start of the first heat after front-row starters Brian Shirley and Terry English washed up the racetrack in turn one. Wall led every lap of the caution-free prelim while Shirley worked his way back to second after falling fourth on the first lap. The hard-charging Shirley ran down Wall on the final circuit, falling just short in a side-by-side finish. Behind Shirley, Jack Sullivan edged Randy Korte for the third position in another side-by-side finish. Korte finished in the fourth and final transfer position.

Brian Shirley of Chatham, Ill., was fastest among 40 qualifiers during Friday’s time trials for the 10th round of the 25-race UMP DIRTcar Summernationals at Paducah International Raceway. His 15.985-second lap at the 3/8-mile oval puts him on the pole of the first of four heat races that will set the lineup for tonight’s Chris Smith Memorial feature.

The top four finishers from each of four heats transfer to the main event. Four finishers from a C-Main go to the B-Main, which transfers two cars to the 40-lap feature, which pays $2,000 to the winner. Four provisional starters round out the 22-car field.

The finishing order of Wednesday night’s series race at Belle-Clair Speedway could be amended pending the results of chemical lab tests. Rumors have run rampant around the pit area the past two days that preliminary test conducted immediately following the $5,000-to-win race indicated that one of the competitors used tires that had been chemically enhanced. Series director Sam Driggers confirmed Friday afternoon that tire samples taken after the event have been sent to a lab for chemical testing with results expected to be returned by Tuesday. Driggers wouldn’t confirm whose tires were being tested and added that such testing is done periodically on the tour. ... Shannon Babb of Moweaqua, Ill., leads the series standings going into Friday night’s race with 569 points. Scott James of Lawrenceburg, Ind., (521) is second followed by Jason Feger of Bloomington, Ill., (483), Ryan Unzicker of El Paso, Ill., (482) and Brian Shirley of Chatham, Ill., (459). ... Mike Spatola of Manhattan, Ill., is among the drivers entered in tonight’s event. He won Thursday night’s event at Clayhill Motorsports Park in Atwood, Tenn., for his second victory on the series in as many career starts. His other victory came in the series opener June 16 at Kankakee (Ill.) County Speedway. ... Chris Wall of Springfield, La., is entered in tonight’s event, marking his first appearance on the tour this season. ... Dan Schlieper of Oak Creek, Wis., is rejoining the tour for tonight’s race after position finishes of first and second in his only other two appearances this year. He won the tour’s $10,000-to-win event June 24 at Tri-City Speedway in Granite City, Ill. ... Billy Moyer of Batesville, Ark., is the defending racing winner at Paducah.