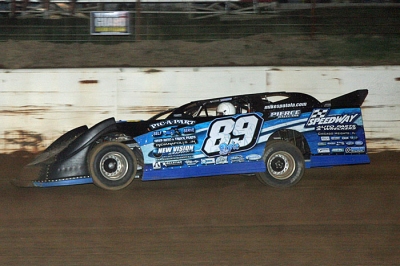 Mike Spatola led every lap at Clayhill for his second Summernationals victory. (photobilly.smugmug.com)

ATWOOD, Tenn. (June 30) – Mike Spatola of Manhattan, Ill., remained perfect on the UMP DIRTcar Summernationals by scoring his second series victory in as many starts when the tour visited Clayhill Motorsports Park for round nine on the 25-race schedule Thursday night. | Complete Summernationals coverage

Spatola, a 20-year-old Late Model rookie, led flag-to-flag in the caution-free, 40-lap main event, turning back challenges from Brian Shirley of Chatham, Ill., and Jason Feger of Bloomington, Ill., to score a $5,000 payday. The victory backs up his victory in the series opener at Kankakee (Ill.) County Speedway on June 16.

“It’s awesome and really just a dream come true,” Spatola said of his perfect Summernationals record. “Two starts and two wins in a row, that’s pretty special for us. This whole team’s been working really hard and working well together. We came down here with the goal to win and just kept diggin’ all night.”

The pole-starting Spatola ran the low groove around the 3/8-mile racetrack to perfection on his way to scoring the victory. Even as he fended off high-side challenges from Shirley midway through the race, Spatola never faltered. Shirley twice pulled alongside for the lead, but Spatola maintained his composure and pulled back ahead both times.

“I seen him once and I just looked to the left and tried not to see him anymore,” Spatola said of his battle with Shirley. “I wanted to run my own line and not worry about anyone else. I knew the bottom would be dominant and maybe someone could do something on the top, but it was gonna take a lot. If I just stayed smooth, I didn’t think anyone could put enough consistent laps together on top to get by me.”

With Shirley fading during the second half of the race, Spatola’s only other challenge came from the defending series champion Feger. After starting eighth, Feger moved by Shirley for second on lap 28 and began closing the distance between himself and Spatola. But the high-running Feger also began to fade late in the race, eventually succumbing to a flat tire with four laps remaining that relegated him to a 16th-place finish.

Billy Moyer, the Hall of Famer from Batesville, Ark., who won the previous two Summernationals events at Clayhill, made a late charge to move from fifth to second at the finish while Shirley held on to finish third. Series points leader Shannon Babb of Moweaqua, Ill., ran among the top five the entire distance and finished in the fourth position. Billy Moyer Jr. of Batesville, Ark., advanced from his ninth starting position to finish fifth, notching his second consecutive top-five finish after not scoring a single top five in any of the tour’s first seven races.

Shirley admitted he may have abused his tires while attempting to overtake Spatola on the high side. But even after fading to third, he was happy with a top-five finish after not performing up to his usual standards in the previous two series events.

“It took everything I had to stay with him and I think I used up everything I had there early,” Shirley said. “It just kinda fell off a little there at the end. But it’s a better finish for us to finish third. We’ve been struggling a bit these last couple of days and a good run was something we needed. It’s a little momentum booster to go on to the next couple tracks where we’re usually pretty good at.”

Notes: Spatola’s Pierce Race Car is powered by a Rhyne Racing Engine with sponsorship from Speedway Auto Parts & Wreckers, Chicago Heights U-Pull-It, Pic-A-Part, Big Daddy Scrap and Modern Carriage Werks. ... Spatola is the third driver to win multiple Summernationals events this year, joining Babb and Scott James of Lawrenceburg, Ind. ... The event was the first of two visits for the series to the Volunteer state this season. The tour will make its second visit for a July 9 event at Clarksville Speedway. ... The series moves to Paducah (Ky.) International Raceway Friday night for a $12,000-to-win event, the highest paying race on the tour’s schedule this year.

Dane Dacus took the lead of the C-Main when polesitter T.J. Herndon got held up by the slower car of Eric Perry with two laps remaining in 12-lap race. Dacus pulled away to the victory while Herndon settled for second. He will also make the main event.

Mike Spatola will start on the pole of the main event after drawing the top spot in a redraw among heat winners. Brian Shirley starts outside the front row while Shannon Babb and Billy Moyer start on the second row. The Late Model C-Main is coming up next. It will send the top two finishers to the main event.

Shannon Babb raced to a dominant victory in the caution-free fourth heat race, with polesitter Jason Feger finishing second. Will Vaught challenged Feger for second midway through the race, but faded late and settled for third. Donny Walden held off Steven Sellars for fourth and will also transfer to the feature.

Billy Moyer pulled away to a convincing victory in the third heat race, leaving Scott James, Brandon Sheppard and Ray Cook to battle for second. James held the position the entire distance, but had to fend off charges from both the high-running Sheppard and low-running Cook. With James pulling away in the closing laps, Sheppard settled for third with Cook taking the fourth and final transfer position.

Mike Spatola won the second heat after moving by Dillan White midway through the race. Jack Sullivan also moved by White and pressured Spatola late in the race, but finished a few car lengths off the leader. White held on for third in the caution free race while Dennis Erb Jr. finished fourth and will also make the main event.

Polesitter Brian Shirley led every lap of the first heat race and held off Austin Dillon for the victory. Dillon pressured Shirley after he jumped the cushion midway through race and again after a late restart. But he came up short and settled for the runner-up finish. Billy Moyer Jr. ran third the entire distance with Terry English taking the fourth and final transfer position. The race was slowed by one caution when Jason McBride slowed while running fourth.

Billy Moyer of Batesville, Ark., winner of both of the previous series events at Clayhill Motorsports Park, topped 30 qualifiers Thursday at the 3/8-mile oval for the ninth leg of the 25-race UMP DIRTcar Summernationals. Moyer posted a lap of 15.729 seconds to earn the pole position for the third of four heat races coming up.

The top four drivers from each 10-lap heat race transfer to the main event. The top two finishers in the B-main will also make the feature while four provisional starters will round out the 22-car field for the 40-lapper.

Shannon Babb of Moweaqua, Ill., leads the series standings with 504 points over Scott James of Lawrenceburg, Ind., (468), defending series champion Jason Feger of Bloomington, Ill., (444), Ryan Unzicker of El Paso, Ill., (438) and Brian Shirley of Chatham, Ill., (389). ... Austin Dillon of Welcome, N.C. is in the Clayhill pit area and will make both his series and track debut. ... Ray Cook of Brasstown, N.C., will make a rare Summernationals appearance at Clayhill. Cook has one Summernationals victory, which came at Tennessee Motor Speedway in Baxter, Tenn., in 1997. ... Rookie Late Model driver Mike Spatola of Manhattan, Ill., is making his second Summernationals appearance this year. He won the series opener at Kankakee (Ill.) County Speedway on June 16. ... Billy Moyer of Batesville, Ark., is rejoining the series at Clayhill. Moyer, last year’s race winner, finished second at Tri-City Speedway in Granite City, Ill., in his only other appearance on the tour this year. ... Scott James said he is expecting a bill from Home Depot after he knocked a chunk out of the Belle-Clair Speedway’s wooden wall during qualifying for Wednesday night’s race at the fifth-mile racetrack. ... An audio broadcast of tonight’s event can be heard on the track’s website at www.clayhillmotorsports.com.