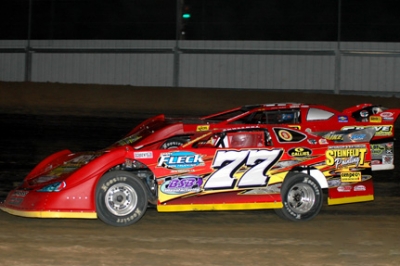 INDEPENDENCE, Iowa (June 29) – On the night when fans at Independence Motor Speedway remembered one of their favorite drivers, Jeff Aikey of Cedar Falls, Iowa, added to his own considerable legacy.

Aikey won Wednesday’s Deery Brothers Summer Series feature at Indee, earning a hefty $5,004 for his Red Dralle Memorial victory. The IMCA Late Model tour checkers were his career 55th and came at the end of a fast-paced 84 lap contest that saw Aikey chase down, then hold off Justin Reed of Quincy, Ill., in the race to the checkers.

“We knew going in that tires would be a concern, but we knew we had a good car, too,” said Aikey, a six-time series champion. “I bided my time once we got into lapped traffic and everything worked out for us.”

Aikey, who’d started 10th, caught Reed for the lead in lapped traffic on lap 55. Reed pulled close and almost alongside several times following a lap 63 restart but just couldn’t complete a pass of his own.

Defending series champion Ray Guss Jr. was sixth and Andy Eckrich maintained his spot on top of the current point standings with a ninth place showing.

Joe Zrostlik led the first 15 circuits from the pole. Beuseling took over and had nearly caught up with the back of the field when the first caution came out on lap 18.

Reed moved into second on the ensuing restart, with Springsteen close behind. Beuseling, Reed and Springsteen ran three wide down the backstretch before Reed was scored first across the stripe at the end of the 33rd lap.

Advancing steadily toward the front, Aikey maneuvered around a lapped car to keep Reed in his sights, then drove to take a lead he’d never relinquish.

Notes: Dralle, of Waterloo, died last October at the age of 69. He was a long-time competitor at Independence and qualified for 39 Deery features. ... Bryan Klein, Nick Marolf and Tyler Bruening all improved a dozen positions from their original start: Klein had the best finish at seventh to earn the $504 hard charger bonus. ... Tom Darbyshire won the $250 Sunoco feature qualifier drawing. .. An Independence record-tying 50 entries were on hand for the seventh series race of the season. The distance of the feature represented Dralle’s first car number; all payout amounts ended with $4, representing his final car number. ... Among drivers failing to make the feature lineup: Darren Ackerman, Sam Halstead, Joel Callahan, Matt Strassheim, Boon McLaughlin, Justin Kay, Rick Wendling, Jay Johnson, Kevin Sather and series ironman Darrel DeFrance. ... The next event in the silver anniversary series schedule is Sunday, July 3 at Quincy (Ill.) Raceway.