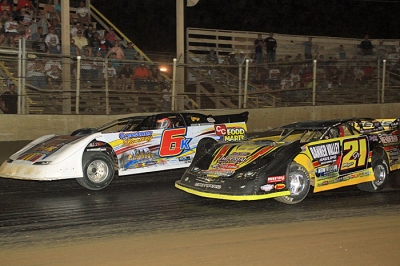 Michael Kloos (6) moves around Billy Moyer Jr. on his way to victory at Belle-Clair. (stlracingphotos.com)

Editor's note: Michael Kloos was stripped of his victory July 9 for using chemically-enhanced tires; Ryan Unzicker was awarded the victory.

BELLEVILLE, Ill. (June 29) – Michael Kloos of Trenton, Ill., patiently followed polesitter Billy Moyer Jr. of Batesville, Ark., for the first half of Wednesday night’s UMP DIRTcar Summernationals feature at Belle-Clair Speedway, all the while waiting for the right opportunity to make his move. | Complete Summernationals coverage

That opportunity came when Moyer caught the slower car of Dewayne Keifer just before the halfway point of the 40-lap race. And when Moyer chose to protect the dominant bottom groove around the fifth-mile racetrack, KIoos moved to the outside and used Keifer as a pick to complete the winning pass on lap 22 of the eighth event on the 25-race tour.

After clearing Moyer, Kloos held off Ryan Unzicker of El Paso, Ill., in the closing laps at the tiny fairgrounds oval just outside of St. Louis and earned $5,000 for his first Summernationals victory. Behind Unzicker, Moyer finished third while seventh-starting Mike Hammerle of St. Charles, Mo., finished fourth. Mark Voigt of Marine, Ill., rounded out the top five finishers.

“I didn’t know for sure if it was gonna stick, but I was gonna for sure give it a try,” Kloos said of his move to the outside of Moyer. “I was getting tired of following and that’s what I was waiting for was the lapped traffic. I had one chance there, so I tried it hoping it would work and it did.”

While the victory is just the second of his career with any touring series, Kloos wasn’t surprised to have won at his home track of Belle-Clair, which as one of the smallest racetracks in the country to host Late Model events, can sometimes tend to be a challenge for some drivers to master.

“This is by far our biggest win and it feels great,” said Kloos, whose only other touring series victory came in a Northern Allstars Late Model Series event earlier this year at Highland (Ill.) Speedway. “It’s good to win here at our home track. It’s a different kinda place and some people have trouble with it, but it’s somewhere I like. You find a track that suits you and I guess this is mine.”

Kloos’s winning move included some contact as he squeezed Moyer down to the bottom of the track. But after the race, Moyer called it a clean pass.

“He did what he had to do and done a good job,” Moyer said. “I was all about protecting the bottom. I was going so slow behind that lapped car and he hit it just right. We rubbed a little bit, but on a short track in lapped traffic, that’s racing.”

After moving by Moyer shortly before lap 30, Unzicker ran down Kloos late in the caution-free race and made a final-lap attempt to drive around Kloos on the outside. But the move came up short and he settled for second.

“I really thought we had a chance to win there for a little while, but the rubber kinda locked down pretty hard on the bottom,” said Unzicker, who finished third Wednesday night at Lincoln Park Speedway in an event he felt he should have won. “You always want to win, but tonight we’ll take second. We were disappointed with third last night because we had the car to beat, but we’re really happy with tonight.”

Notes: Kloos drove a Rayburn Race Car that's powered by a Pro Power Engine with sponsorship from Gerstner Plumbing, M&E Auto Body, Al’s Tire and Automotive, Rural Family Medicine and C&K Heating and Air. ... With his victory, Kloos became the third first-time winner on the tour in 2011, joining Scott James of Lawrenceburg, Ind., and Mike Spatola of Manhattan, Ill. That number ties that amount of first-time winners on the entire tour in 2010. ... The top two drivers in the tour’s points standings both struggled Wednesday night. Leader Shannon Babb of Moweaqua, Ill., and second-place Scott James of Lawrenceburg, Ind., both had to use provisionals to make the race. James finished 13th with Babb 14. ... The series moves to Clayhill Motorsports Park in Atwood, Tenn., Thursday for another $5,000-to-win event.

In a redraw among heat winners, Billy Moyer Jr. drew the pole for the main event with Michael Kloos alongside. Jason Feger and Ryan Unzicker will share the second row. ... Shannon Babb and Scott James will use Summernationals provisionals to start the main event while Dillan White got the UMP national points provisional and Mike Schulte got the track provisional. ... Officials have once again reworked the track surface. The sportsman and modified features still remain before the Late Model main event.

Dennis Erb Jr. used the high groove to drive around Dave Thornton and Jack Sullivan to win the B-Main and earn a starting spot in the main event. Sullivan held off Thornton and Frank Martin in the closing laps to finish second and will also transfer the feature.

Jason Feger used the high groove to power to the fourth-heat victory. The second-starting Feger battled side-by-side with polesitter Mark Voigt for the first half of the race before pulling away in the closing laps. Voigt settled for the runner-up finish with Brandon Sheppard third. Jim Gibson held off defending race winner Dennis Erb Jr. for fourth. Gibson will transfer to the feature while Erb will have to run the B-Main. The race was redflagged with two laps complete when Dillan White, Mike Schulte and Vince Grondzki all tangled in turn three. All three cars continued on with minimal damage, but track crews had to work nearly 10 minutes to separate the cars of White and Grondzki.

Michael Kloos started from the pole and led every lap to win the third heat race. Mike Hammerle held off a strong challenge from Donny Walden to finish second. Behind Walden, Rodney Standerfer held off Jason Crump to finish in the fourth and final transfer position. A four-car pileup slowed the race on the first lap. All cars involved were able to continue.

Ryan Unzicker won the second heat race after Randy Korte suffered a flat right-rear tire on the final lap. The second-starting Korte moved to the lead over Unzicker on the start of the race and used the high groove to maintain the spot through the first nine laps. The low-running Unzicker pressured Korte the majority of the race and survived a mid-race brush with the inside wall to score the victory. Brian Shirley also moved by Korte on the final lap to finish second. Korte held on for third with Kevin Weaver taking the fourth and final transfer position at the finish line. The top two drivers in the series points standings, Shannon Babb and Scott James, finished sixth and seventh respectively.

Polesitter Billy Moyer Jr. moved to the lead on the start of the first heat race and led every lap for the victory. Kevin Cole started second and pressured Moyer early in the race, but settled for the runner-up finish after Moyer pulled away in the closing laps. Leon Henderson outdueled Dewayne Keifer to finish third. Keifer finished fourth and will also transfer to the main event.

Series points leader Shannon Babb of Moweaqua, Ill., broke an axle on his second qualifying lap. His crew is thrashing to replace the entire rear-end under his Victory Circle Race Car in time for him to make his heat race. ... Track crews reworked the track surface following Late Model qualifying. Sportsman heat races are up next followed by open-wheel modified heats. Late Models are last on the schedule for the remainder of the night.

Ryan Unzicker of El Paso., Ill., was fastest among 32 qualifiers Wednesday at Belle-Clair Speedway on the eighth leg of the 25-race UMP DIRTcar Summernationals. Unzicker’s lap of 12.301 seconds at the tiny fifth-mile oval puts him on the pole of the second of four heat races coming up.

Series points leader Shannon Babb of Moweaqua, Ill., wasn’t very quick on his first qualifying lap, posting a time that was last in the second group. He then had mechanical issues on his second lap and pulled off the track before crossing the finish line.

With back-to-back victories at I-96 Speedway in Lake Odessa, Mich., Sunday and Lincoln Park Speedway in Putnamville, Ind., Tuesday, Shannon Babb of Moweaqua, Ill., is atop the series standings heading into tonight’s event. Babb’s 462 points leads Scott James of Lawrenceburg, Ind., (425), Jason Feger of Bloomington, Ill., (397), Ryan Unzicker of El Paso, Ill., (363) and Brian Shirley of Chatham, Ill., (338). ... Leon Henderson of Laurel, Miss., is making the first Summernationals appearance of his career tonight. After taking a look at the tight fifth-mile oval, he’s rethinking he decision to make his Hell Tour debut at Belle-Clair. “I always heard how small it was, but I never thought it could really be this small,” the second-year Late Model driver said prior to hot laps. “I’m thinking maybe I should have waited until tomorrow night, but we’re here so we might as well give it a shot.” Henderson decided to make the trip so he could race with Billy Moyer Jr., the Batesville, Ark., driver he sponsors. Moyer said Henderson had yet to ask him for any advice on getting around the tricky oval, but if he does all he can tell him is “take it easy and hope for some luck.” ... Moyer is hoping for some luck of his own tonight as he looks to break out of the slump he’s been in since the tour started. “If there’s any track I think I can do it, it’s here,” Moyer said of Belle-Clair, where he won a heat race and scored a top-five feature finish on the tour in 2010. “This place really fits my style and I like racing here. We’ve got all our notes from last year and we were pretty good then, so I think we’ll be alright.” ... Ryan Unzicker’s team has fixed the electrical issues that caused him to slow on the final lap of Tuesday night’s feature at Lincoln Park Speedway. An issue in the wiring of the electrical motor that powers the fan in his helmet caused an electrical short. He was running second when the problem occurred and ended up third after Jason Feger moved by him.