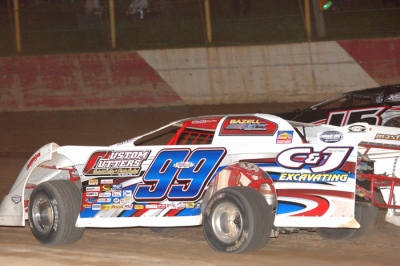 Henry fought off challenges from Moran earlier on the rugged surface, but when he caught a rut in turns one and two, his bouncing car lost momentum, allowing Moran to pounce. Henry couldn't regain the lead over the final 13 laps.

"My car was working well on the bottom, and that kept me off the cushion where it wasn't quite as smooth," Moran said. "I could roll around there and get underneath him, and when he caught that rut, I was almost too close. Fortunately I missed him, and we took the lead before he could regain control."

Henry, who ended up second, was a sitting duck when Moran sped past.

"It popped out of gear, and that's when Donnie drove past me," Henry said. "It took me a minute to get 'er back in gear, and by then it was too late. He'd already passed me. We caught him a little bit toward the end, but not enough."

Moran and Henry led the 24-car field to green at the outset of the 40-lapper with Henry powering to the early lead with Moran, Carrier, Casebolt and Greg Johnson in tow. Henry built a sizable lead early, but that was erased by the race's lone caution for debris on the 10th lap.

When racing resumed, Henry again roared ahead of the pack as Moran stayed within striking distance. Soon the lead duo began a high speed game of cat-and-mouse, methodically slicing through the back of the field. Behind the leaders, Carrier and Johnson continued to duel for the third position while King and Matt Miller looked to crack the top five.

At the halfway point, Moran was creeping closer to Henry, patiently waiting for the right opportunity, Moran looked high and low for a pass on the race-long leader. Finally, on lap 27, Henry jumped the cushion coming off turn two and Moran was able to throttle ahead to grab the lead. Henry gathered up his momentum to try and catch the new race leader.

Over the final 10 laps, Henry was able to close back in on Moran, but didn't have time to catch him.