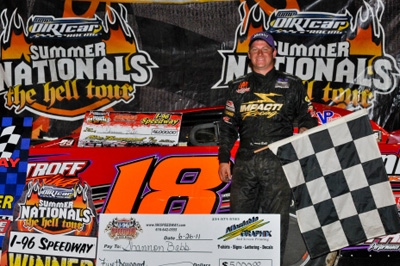 LAKE ODESSA, Mich. (June 26) – After watching Brian Shirley pull to nearly a half-track advantage in Sunday night’s UMP DIRTcar Summernationals feature at I-96 Speedway, second-running Shannon Babb had all but given up hope of winning the 40-lap race. But that all changed when Shirley of Chatham, Ill., hit the back straightaway wall with just three laps remaining and handed Babb the lead. | Slideshow

Babb of Moweaqua, Ill., held off Jeep Van Wormer of Pinconning, Mich., in a final run to the finish for a $5,000 payday at the 3/8-mile racetrack. The victory, which was his first on tour in 2011 and 63rd of his career, moved Babb passed Scott James of Lawrenceburg, Ind., for the lead in the Summernationals points standings after six races on the 25-race tour.

“Brian was gone and I was just counting on second,” Babb said of his improbable victory. “I hate to see that happen; he was definitely driving one heck of a good race. But that’s why you run the whole race. As bad as it is, that kind of stuff happens and it worked in our favor tonight.”

The second-starting Shirley was in a league of his own for the majority of event, taking over on the initial start and setting sail in a 32-lap green-flag run. Even after James slowed to bring out the race’s first caution, the high-running Shirley again blasted away from Babb on the restart before getting too high exiting turn two on lap 38.

Shirley’s car rode down the wall nearly the full distance of the back straightaway, allowing Babb to race by. Shirley then tangled with third-running Zack Olger of Saint Johns, Mich., after pulling his car off the wall, sending both cars spinning.

“With five laps to go and Babb and those guys behind you, you just never know,” a disappointed Shirley said after ending up 19th. “It’s my fault; I was just driving way too hard and got up there to high. I knew we had a good car, I just didn’t know we were that good. If I’d known I would have slowed down some.”

The seventh-starting Van Wormer was second for the final restart and used it as an opportunity to take a shot at the lead. He dove under Babb entering turn one, but Babb’s run off the top side propelled him back ahead, leaving Van Wormer to settle for second.

“We came up through there late and after that caution for Brian, I thought I had a shot there,” Van Wormer said. “I just couldn’t get the run I needed in the bottom there off two. Earlier I thought we would probably end up fourth or fifth, so to come home second is a good run for us.”

Shirley wasn’t the first driver to fall victim to I-96’s treacherous high groove. More than 10 cars went over the banking during the night’s preliminary action, the majority going off in turn four. Of those cars, two rolled in the process.

The demise of others was enough to keep Babb from using the high groove too much in the main event, and it paid off for him in the end.

“It’s a different type of deal,” Babb said of I-96’s 3/8-mile oval that was built last year on the inside of the facility’s half-mile track. “I just made my mind up that I wasn’t gonna live up there on that curb. They went around there and made it wet and made it tempting to run up there, but I made my mind up to go in high and run down through the middle. It was definitely a little edgy up there.”

James salvaged a seventh-place finish after causing the race’s first caution. Olger, who set fast time during time trials, ended up 10th after tangling with Shirley.

After a redraw among heat race winners, Shannon Babb will start from the pole of the main event with Brian Shirley alongside. Dillan White will start third with Zack Olger fourth. ... Series provisionals will go to Scott James and Donny Walden while Rusty Schlenk will get the UMP national points provisional. Eric Spangler is the track's provisional starter. ... Track crews are touching up the racing surface just a bit. The Late Model feature is up next.

Brian Ruhlman started second in the B-Main and led every lap to earn the victory and a starting position in the main event. Fourth-starting Donnie Marcoullier moved by polesitter Rusty Seavers with two laps remaining to score the runner-up finish. He'll also transfer to the feature. Rusty Schlenk worked his way forward from his sixth starting position and challenged for second midway through the race before suffering a flat left-rear tire. He'll have to hope for a provisional to make the feature lineup.

I-96 Speedway’s 3/8-mile oval hasn’t been very kind to drivers attempting to run the high groove in turns three and four. More than 10 Late Models have gone over the banking on that end of the racetrack at some point during the night’s action, with two of those cars rolling over in the process. Jeep Van Wormer of Pinconning, Wis., got over the banking while battling with Shannon Babb of Moweaqua, Ill., for the lead of the third heat race. He was able to somehow maintain control of his race car and held on to the second position. “You just turn right and hope and pray it doesn’t roll and then try and find a way back on the track,” Van Wormer said of his trip over the banking. He later blamed the configuration of the track, which was built last year inside of the facility’s half-mile oval, for the unusual number of incidents. “We’re obviously having trouble keeping cars in the park,” he said. “I think these guys maybe should go take a look at some other tracks and make some changes. I mean, at this rate should we even be here?” ... Ryan Unzicker of El Paso, Ill., was another driver who took a ride over the turn-four banking. He went off the track in qualifying and hit a U-tire that marks in inside of turn four on the half-mile track. After making repairs to the front end of his race car, he rebounded in his heat race, driving from the tail of the field to a fourth-place finish to transfer to the main event. “It’s definitely tricky up there,” Unzicker said. “I don’t know what to say about it. It held us pretty decent up there in hot laps, but when I tried to go up there in qualifying it never even thought about sticking.” ... Series points leader Scott James of Lawrenceburg, Ind., made two trips over the banking in preliminary action. His first trip, which came in his heat race, caused suspension damage to his primary Riggs Motorsports entry, forcing him into a backup car for the remainder of the night. With a points provisional assured to James, he took the backup car out in the second C-Main just to shake it down, but again ended up over the banking in turn four. He drove the car to the pits where his crew is checking it over. ... Bill Bray of Spring Lake, Mich., and RIch Neiser of Fruitport, Mich., were the two drivers who rolled after going over the banking. Neither driver was injured, but both race cars suffered heavy damage.

Dillan White grabbed the lead on the start of the fourth heat race and turned back a number of challenges from Brandon Sheppard to score the victory. The pole-starting Sheppard settled for the runner-up finish with Frank Heckenast Jr., third. Brandon Thirlby finished fourth to also make the feature lineup. Rich Neiser went for a wild ride on lap five when he went off the turn-four banking and rolled a number of times. He was uninjured, but his race car was severely damaged. The race was also slowed with one lap complete when Donnie Marcoullier tagged the back straightaway wall. He continued on and finished fifth.

Shannon Babb moved to the lead over polesitter Jeep Van Wormer on the start of the third heat race and led every lap for the victory. Van Wormer pressured Babb for the lead midway through the 10-lap race, but he went over the back of the racetrack in turn four on lap six. Van Wormer somehow kept control of his race car on the backside of the banking and came back on to the front straightaway still in the second position. He held off Billy Moyer Jr. in the closing laps for the runner-up finish. Moyer settled for third with Alan Vanchaska finishing fourth to also transfer to the feature.

Polesitter Brian Shirley won the second heat race after swapping the lead with second-starting Jason Feger during the opening laps. Shirley pulled to a comfortable advantage on his way to the victory while Feger held off Jack Sullivan to finish second. Sullivan finished third with Dennis Erb Jr. finishing fourth to also transfer to the main event. Series points leader Scott James had a disappointing race. After suffering a flat tire in a first-lap scuffle, he restarted on the tail and advanced to fifth before going off the track in turn four midway through the race. He pulled to the pit area and finished 10th.

Polesitter Zack Olger led every lap on his way to winning the first heat race with Tom Sprague Jr. finishing second in the caution-free event. Curtis Roberts finished third after nearly going off the track in turn four late in the race. Ryan Unzicker started from the tail of the field and moved to the fourth and final transfer position midway through the 10-lap race. He ran down Roberts in the closing laps, but couldn't find a way around.

The top four finishers among the four heat races transfer to the 40-lap main event, which pays $5,000 to the winner. Top C-Main finishers will transfer to the B-Main, which will send two cars to the main event. Four provisional starters will round out the 22-car field.

Scott James of Lawrenceburg, Ind., leads the tour's standings by five points over Shannon Babb of Moweaqua, Ill. James qualified fourth in the second group while Babb qualified second in the third group.

Four drivers went over the back of the racetrack during qualifying, including Ryan Unzicker of El Paso, Ill., and Rusty Schlenk of Jackson, Mich., who both left the track on their first lap. Unzicker made his way back on the track and took his second lap while Schlenk drove his car to the pit area without posting a time. Bill Bray of Spring Lake, Mich., rolled his race car when he went off the top of turn four in hot laps. He was uninjured, but is done for the night.

Track crews are reworking the track surface prior to heat race action.

DirtonDirt.com's video coverage of today's event will consist of heat race and feature highlights and a full recap later tonight.