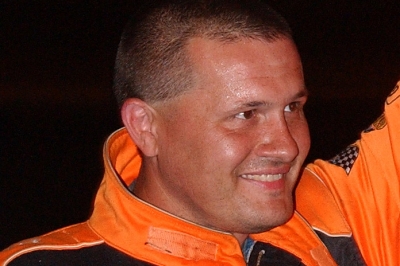 WAUSEON, Ohio (June 25) — Eddie Carrier Jr. of Salt Rock, W.Va., made his first trip to Oakshade Raceway a successful one, making a dramatic last-lap pass for a $4,700 victory in the 22nd annual Barney Oldfield Race.

The seventh-starting Carrier's late charge stole a victory from Canadian invader Andrew Reaume of Blenheim, Ontario, who started ninth and took the lead from outside front-row starter Casey Noonan of Sylvania, Ohio, on a lap-eight restart. | Sidebar | Slideshow

Reaume stayed in control as the race ran caution-free the rest of the way, but Carrier caught him at the finish in the non-touring UMP DIRTcar-sanctioned event.

Reaume settled for second followed by Noonan and Curtis Roberts of Coleman, Mich., Steve Casebolt of Richmond, Ind., rallied from 11th to round out the top five while polesitter Mike Bores of Bellevue, Ohio, was last in the 20-car field.

"I didn't think I was gonna be able to drive up through there," said Carrrier, running seventh at the lap-eight caution. "After the yellow, I got to movin' around and got the tires working better. I wasn't even sure the No. 88 car was the leader. He'd checked out a little bit earlier, and I wasn't sure if someone else had maybe gotten around him. I've always heard a lot of good things about the racing at this place, and it's our first time to come here. It's everything we'd hearda really great racetrack with plenty of room to maneuver around."