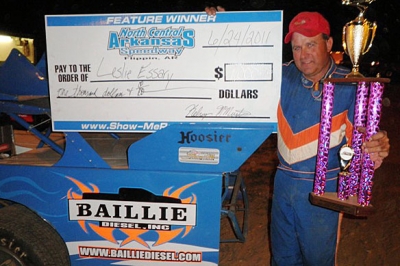 Leslie Essary made it three in a row on the Race Brothers Show-Me Series.

“It’s unbelievable,” Essary, who sat out most of the 2010 racing season, said of his string of wins. “With all the good cars in this series to win three in a row is just luck.”

Randy Zimmerman of Fort Scott, Kan., started seventh and made a late run at Essary before settling for the runner-up finish while Hunter held on to finish third. Justin Wells of Aurora, Mo., finished fourth with Rex Merritt of Billings, Mo., rounding out the top five finishers.

Notes: Essary's Jimmy Greenway-owned GRT Race Car has a Mike’s Motor & Machine powerplant with sponsorship from Baillie Diesel and Mike’s Motor & Machine. ... Eassary went another win streak on the series in 2006, winning four consecutive events. ... Series officials have issued a challenge for the next event, offering a $250 bonus for any driver who can beat Essary. If Essary is able to make it four in a row, he’ll earn an additional $100. ... The tour’s next event is July 1 at Thunderbird Speedway in Muskogee, Okla.