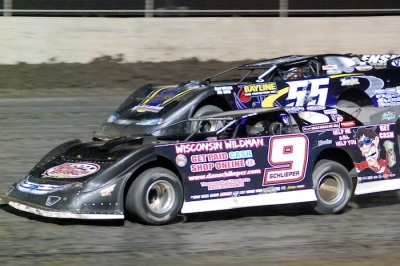 GRANITE CITY, Ill. (June 24) – Ending a winless streak that was approaching nearly a year in length, Dan Schlieper of Oak Creek, Wis., scored a $10,000 victory at Tri-City Speedway Friday night after turning back a hard-charging Billy Moyer of Batesville, Ark., during the closing laps of the fifth race on the month-long UMP DIRTcar Summernationals. | Complete Summernationals coverage

Schlieper started from the pole and trailed second-starting Jeep Van Wormer of Pinconning, Mich., for the first half of the race. He moved by the fading Van Wormer just after the halfway point and held off 12th-starting Moyer by less than a car length at the finish line.

The victory is Schlieper’s first since a Lucas Oil Late Model Dirt Series victory in July of last year and is just the second Summernationals victory of his career.

“This has been a long time coming and I’m absolutely ecstatic to get a win here,” Schlieper said. “We did little or nothing to the car all night. We put the standard set up back in it and just rock and rolled. Things are rolling a lot better right now and it feels a lot better to be back in victory lane.”

Van Wormer opened nearly a straightaway advantage over Schlieper during the first 10 laps of the race before a caution on lap 12 erased his lead. Schlieper didn’t let Van Wormer get so far away after the restart and began to apply heavy pressure as Van Wormer’s softer tires began to go away near the halfway point of the race.

Moyer moved within striking distance by lap 35 and made multiple attempts to move underneath Schlieper in the closing laps. After each bottom-side attempt failed, Moyer looked to the high side on the final lap, but that too failed and Schlieper held on for the victory.

“I knew Jeep had softer tires than I had and I was just working mine and gradually reeled him in,” Schlieper said. “I started getting tight there toward the end and I could see Moyer out of the corner of my eye. ... I knew he was there so I just held my line as best as I could. I even made an extra lap after it was over just to be sure.”

Moyer, who was making his first Summernationals appearance of 2011, got off to a slow start on the night, qualifying fourth in his group and finishing third in his heat race. He avoided near disaster on the first attempt to start the feature when he and Chad Simpson of Mount Vernon, Iowa, tangled in front of the field.

Everyone avoided the sideways cars, and Moyer continued on with minimal damage for the complete restart. He quickly established himself as a contender once the race got going, needing just two laps to move into the top five before falling short in his bid to win the 79th Summernationals race of his career.

“We started out pretty slow here in our heat race, but we made some adjusts and I guess they were the right ones,” Moyer said. “The car went right through where nobody was. The car was good the whole race; we just came up a little short.”

Shannon Babb of Moweaqua, Ill., drove to a third-place finish after starting 16th and moved to within five points of leader Scott James in the series standings. James of Lawrenceburg, Ind., finished 11th. Van Wormer held on to finish fourth while Matt Miller of Whitehouse, Ohio, rounded out the top five finishers after starting seventh.

Notes: Schlieper’s Bloomquist Race Car is powered by a Pro Power Racing Engine. ... Schlieper’s most recent victory came on July 31, 2010 at Hagerstown (Md.) Speedway. His previous Summernationals victory was at Hales Corners Speedway in Franklin, Wis., in 2001. ... Brian Birkhofer of Muscatine, Iowa, was scheduled to start third in the main event, but his left-front wheel fell off his race car before the start of the race. He pitted to replace the tire and finished 19th after starting from the tail of the field. ... Will Vaught of Crane, Mo., ran among the top 10 early in the race before falling out with mechanical issues. ... The lap-12 caution was caused by an incident that involved defending series champion Jason Feger of Bloomington, Ill., Feger, who won Thursday night’s race at Fayette County Speedway in Brownstown, Ill., battled back to finish 10th. ... The tour moves to Fairbury (Ill.) American Legion Speedway Saturday night for another $10,000-to-win event.

Brian Shirley and Steve Casebolt battled for the B-Main victory, with Shirley coming out on top. Casebolt finished second and will also transfer to the feature. Jeremy Payne led early in the race before the fourth-starting Casebolt moved by for the point. Shirley started fifth and followed Casebolt by Payne. He then used a turn-three slidejob to take control with three laps remaining.

Jason Feger's team scrambled under the hood to make fixes on a problem that forced him out in the final laps of his heat race after he faded badly from contention. "I don't know if it's electrical or what," Feger said while fetching tools. "It just ain't right." .... Steve Lance Jr. started on the pole of his heat race and narrowly lost a race-long duel with fellow front-row starter Brandon Sheppard, putting him into the main event in his first trip to the track since it was shortened from its half-mile configuration. Lance liked starting on the pole, but it reminded him of some fatherly advice. "My dad always said you look better coming from the back to the front instead of from the front to the back." ... Shannon Babb's team swapped carburetors following his fourth-place heat race finish. They didn't like the way the initial one was running, crew member Chris Burton said. ... Dillan White started on the pole of the third heat, but they young Kentuckian struggling with his car's handling in fading to sixth. "I was going to fast at first, and so I slowed down and it started pushing like a dump truck," White said.

Ryan Dauber won the second C-Main to earn a B-Main starting position along with runner-up Billy Drake. Billy Moyer Jr. was never a factor in the race and finished fifth. He'll have to hope for a provisional to make the main event.

Doug Drown moved by Jack Sullivan and Randy Korte on his way to winning the first of two C-Mains. Korte followed Drown to the finish in the second position. The two drivers will transfer to the B-Main.

In the redraw among heat winners, Dan Schlieper drew the pole position with Jeep Van Wormer alongside. Brian Birkhofer and Brandon Sheppard make up the second row. Two C-Mains are coming up shortly followed by lower-division heat races, the B-Main, then the Late Model feature.

Jeep Van Wormer moved to the lead over polesitter Chad Simpson on the start of the fourth and final heat race and led every lap for a convincing victory. Fourth-starting Billy Moyer moved to second early in the race, but allowed Simpson to slip back around him on a lap-two restart. Simpson scored the runner-up finish while Moyer settled for third. Shannon Babb finished fourth and will also make the feature lineup. The race's only caution was caused by debris with two laps complete.

Brian Birkhofer used the low groove to work his way forward from his fifth starting position and moved by Matt Miller on his way to winning the third heat race. Miller finished second in the caution-free race with Mark Burgtorf just behind in third. Craig Smith held off Bobby Pierce in the closing laps to finish fourth and will also transfer to the main event. Polesitter Dillan White ran among the leaders early, but fell back to sixth after nearly spinning out midway through the race.

Brandon Sheppard and Steve Lance Jr. battled side-by-side for nearly the entire distance in the second heat race with the high-running Sheppard edging Lance at the finish. Will Vaught and Terry Phillips had a similar battle for the third position throughout the race. Vaught tagged the wall taking the white flag, but was able to continue on and held off Phillips, who settled for the fourth and final transfer finish.

Dan Schlieper of Oak Creek, Wis., topped 52 qualifiers during Friday’s time trials for the fifth round of the month-long UMP DIRTcar Summernationals. Schlieper’s lap of 15.104 seconds around the 3/8-mile oval gives him the pole position for the first of four heat races coming up.

Ryan Unzicker of El Paso, Ill., got into the wall in turns three and four on his first lap. He was able to drive the car off the racetrack, but didn’t complete a lap. Billy Moyer Jr. of Batesville, Ark., was the next car on the track after Unzicker, but he pulled off before taking the green flag. He was in a backup car after wrecking in hot laps.

Scott James of Lawrenceburg, Ind., leads the series into the event with two victories in the first four races. His 267 points leads Shannon Babb of Moweaqua, Ill., (237), Brian Shirley of Chatham, Ill., (215), Jason Feger of Bloomington, Ill., (210) and Ryan Unzicker of El Paso, Ill., (209). ... After getting off to a slow start, defending series champion Jason Feger bounced back Thursday night by scoring his first victory on the tour in 2011 at Fayette County Speedway in Brownstown, Ill. He outdueled Steve Casebolt of Richmond, Ind., and Jeep Van Wormer of Pinconning, Mich. Feger has won the previous two Summernationals events at Tri-City. ... Six-time Summernationals champion Billy Moyer of Batesville, Ark., is making his first appearance on the tour in 2011. The Hall of Famer leads the series all-time win list with 78 victories. He won six races on the tour in 2010. ... Springfield, Mo., teammates Terry Phillips and Jeremy Payne are among other drivers making their first Summernationals appearance of the season. ... Dan Schlieper of Oak Creek, Wis., is in action Friday night. His only other Summernationals appearance this year was a runner-up effort a week ago at Cedar Lake Speedway in New Richmond, Wis. ... Jason Rauen of Farley, Iowa, is also back for his second tour appearance. He set a new track record and posted a sixth-place feature finish at Cedar Lake. ... Billy Moyer Jr. of Batesville, Ark., and Steve Leach of Staunton, Ill., got together during hot laps, causing damage to the right-front of Moyer’s race car. ... Ryan Unzicker's team discovered a problem with the pinion angle on his car's lift bar, a problem he thinks might've hampered the car's performance recently. Something didn't seem quite right with the car, but the lift bar wasn't an obvious place to look. "It's something you never move," said Unzicker, who suspects a wreck a month ago in Fairbury, Ill., as the culprit. ... Billy Drake of Bloomington, Ill., is driving the Ray Neltner-owned No. 75. He's driven the MasterSbilt Race Car occasionally this season, mostly at Peoria (Ill.) Speedway. ... Illinois drivers Tim Lance and Donny Walden visited the Gateway Arch in St. Louis along with Lance's boys/crew members, Brandon and Tim Jr.