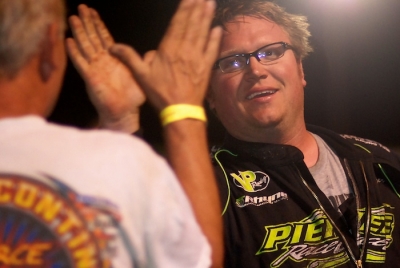 BROWNSTOWN, Ill. (June 23) – After struggling through the opening rounds of the UMP DIRTcar Summernationals, defending series champion Jason Feger appears as though he may finally have things headed in the right direction. | Complete Summernationals coverage

The Bloomington, Ill., driver was back to his usual self when Fayette County Speedway hosted the fourth event on the month-long tour Thursday night, racing to a $5,000 victory in the 40-lap feature. Feger started sixth and moved by race-long leader Jeep Van Wormer of Pinconning, Mich., midway through the caution-free race on his way to scoring the sixth Summernationals victory of his career.

The triumph comes after Feger opened his title defense with finishes of 16th and 20th in the first two series events. He began his turnaround with a sixth-place finish Wednesday night at Highland (Ill.) Speedway and now he believes he still has a shot at winning back-to-back Hell Tour championships.

“I told my guys that last night I think we stopped the bleeding and now we just gotta work on the healing,” said Feger, who entered Thursday's race sixth in the tour's points standings. “I think tonight was definitely a big step in that direction. Hopefully now we’re back on track because we’ve got a long way to go in this thing.”

Feger, who posted the fastest lap in time trials before finishing second in his heat race, wasted little time moving to the front on the multi-groove racetrack. He advanced to the third position by the second lap of the race, and by lap five he had moved by polesitter Steve Casebolt of Richmond, Ind., for second.

He then used the high line to quickly chase down Van Wormer, who was also running the top groove, forcing Feger to search to find a way around. Feger patiently worked the middle and bottom grooves around the third-mile racetrack, but couldn’t get a strong enough run to pull ahead.

Feger got the break he needed when Van Wormer had to check up to avoid the slower car of Frank Heckenast Jr. when he tagged the turn-four wall just in front of the leaders. That allowed Feger to nose ahead, and he cleared Van Wormer two laps later.

“The middle and lower line was a little bit faster, but being out front Jeep didn’t really know that,” Feger said. “I was actually kinda fortunate to be second. I was able to try the middle and the bottom and I knew it was there. I kept getting runs on him, but when Frankie got the wall there that gave me enough to get by him.”

Feger pulled away after taking the lead while Van Wormer allowed Casebolt to slip by late in the race and earn the runner-up finish. After settling for third, Van Wormer said he felt he could’ve held Feger off if he didn’t have to slow for Heckenast.

“I thought for a second I was gonna hit him and checked up,” Van Wormer said. “That kind of broke my momentum a little bit and I think that was really the turning point. I think I could have held on, but I knew then it was pretty much over. But it’s still a good run. The car ain’t tore up and we got a top-five finish.”

Notes: Feger's Pierce Race Car is powered by a Rhyne Competition Engine and sponsored by Chizmark Larson, Pro Tire & Automotive, and Jaxon Chase Steel Detailing. ... Van Wormer won the 2010 Summernationals event at Fayette County, a race in which Feger was the runner-up finisher. ... Points leader Scott James of Lawrenceburg, Ind., finished seventh after winning the previous two events on the tour. ... Shannon Babb of Moweaqua, Ill., entered the night second in the standings. After wrecking in his heat race, he used a provisional to start 19th in the feature and finished 10th. ... The series moves to Tri-City Speedway in Granite City, Ill., Friday night for a $10,000-to-win event.

Matt Miller had to survive multiple close calls to score a runner-up finish in the third heat race. The first came on the opening lap of the race when he and polesitter Jeep Van Wormer got together entering turn one. Miller, who beat Van Wormer to the corner, wasn’t very happy about the incident, saying Van Wormer used heavy contact to take the position. “Jeep should know better than that,” Miller said of the contact that nearly caused him to spin out. “I gave him plenty of room and he just ran in there and hit me. That’s not how you’re supposed to race.” Van Wormer, who went on to win the prelim, took the blame for the contact, but said it wasn’t intentional. “That’s just racing on a short track,” Van Wormer said. “I got in there too hot and got into him. It’s not like I did it on purpose. We run a lot of laps together and I’ve always done my best to race him clean.” Miller’s second close call came midway through the race. After falling to third, he was attempting to go back around Brent Kreke for second when Kreke bobbled and slid into Miller exiting turn two. Both drivers continued on to the finish. Even with all the mishaps, Miller is pretty happy with his race car. “We had a car that should have one that heat race,” said Miller, who will start seventh in the feature. “It’s my first time racing here and I’m not sure what the track’s gonna do, but I think we got a car capable of winning if we can stay out of trouble.” ... Kent Robinson is feeling pretty good about his chances in the main event after holding off both Jason Feger and Scott James to win his heat race. “That’s two of the best out here, and when you outrun guys like that it definitely boosts you confidence,” he said. Robinson wasn’t quite happy with the way his engine was running in preliminary action, but after changing carburetors, he believes he has the issue solved. He’ll start third in the main event. ... Robinson wasn’t the only driver changing carburetors after the heat races. Feger also changed his after his car had a bad miss throughout time trials and the heat.

Third-starting Frank Heckenast Jr., survived an early scrape with the turn-four wall and moved by Chad Zobrist and Mark Voigt to win the B-Main. Voigt finished second in the caution-free race and will also transfer to the main event.

Dillan White led every lap of the caution-free fourth heat race and held off a hard-charging Rusty Schlenk on the final lap to score the victory. Schlenk started fifth and used the high groove to power from fourth to second in the closing laps of the race. He settled for the runner-up finish with Brian Shirley close behind in third. Polesitter Tanner English finished fourth to also transfer to the main event.

Polesitter Jeep Van Wormer ran away with the third heat race after surviving and early challenge from Brent Kreke. As Van Wormer pulled away, Matt Miller and Tim Lance moved to challenge Kreke. Miller and Kreke swapped the second position a number of times during the middle portions of the race, making heavy contact at one point. Miller finally pulled ahead and scored the runner-up finish while Kreke held off Lance for third. Lance also transferred to the feature in fourth. Van Wormer, Miller and Shannon Babb all went three-wide on the first lap of the race with Babb getting sideways and collecting Randy Korte in a wreck that left Babb's race car resting on Korte's hood. Neither car appeared to be severely damaged, but both drivers pulled to the pit area.

Kent Robinson outdueled Jason Feger in a race-long battle to win the second heat race. The two front-row starters raced side-by-side nearly the entire distance with Robinson pulling ahead by a nose at the finish of the caution-free race. Series points leader Scott James finished third just behind the two leaders with Ryan Unzicker taking the fourth and final transfer position.

Steve Casebolt led every lap of the first heat race to win from the second starting position. Kevin Cole moved to second early, but he let Mark Burgtorf slip by midway through the race. Michael Kloos also moved by Cole to finish third. Cole held on to the fourth and final transfer position at the finish. Polesitter Brandon Sheppard spun on lap three to bring out the race’s only caution. He battled back to sixth at the finish after restarting on the tail.

Defending series champion Jason Feger of Bloomington, Ill., topped 48 qualifiers Thursday at Fayette County Speedway in time trials for the fourth round of the month-long UMP DIRTcar Summernationals. Feger posted a lap of 13.425 seconds around the third-mile oval to earn the pole for the night’s third heat race.

The top four finishers from each of four heat races will transfer to the main event. The top two finishers from the B-Main will also transfer and four provisional starters will round out the 21-car field. The nights’ 40-lap feature pays $5,000 to the winner.

Scott James of Lawrenceburg, Ind., leads the series standings after winning two of the first three events on the tour. James’s 214 points leads Shannon Babb (190), Ryan Unzicker (166), Brian Shirley (160) and Dennis Erb Jr. (140). ... Defending series champion Jason Feger of Bloomington, Ill., got off to slow start on the tour finishing 16th and 20th in the first two series races. He bounced back with a sixth place finish Wednesday night at Highland (Ill.) Speedway and jumped from 13th to sixth in the points standings. ... Randy Korte of Highland, Ill., brought out the only caution during Wednesday night’s feature when he had right-rear suspension trouble early in the race. His crew has made repairs and he’s ready to go at Fayette County. ... Steve Thorsten of Chebanse, Ill., rolled his race car in qualifying Wednesday night, appearing to cause heavy damage to the car. But he and his crew made repairs and will compete with the same car Thursday. ... Frank Heckenast Jr. of Orland Park, Ill., is making his first Summernationals appearance of 2011. He tentatively plans to follow the tour through the July 1 event at Paducah (Ky.) International Raceway. ... Steve Casebolt of Richmond, Ind., is hoping for a better outing at Fayette County after he missed Wednesday night’s feature at Highland. It was his first visit to the quarter-mile racetrack in 11 years. ... Thursday night’s race was originally slated to be the eighth event on the tour, but four of the first six events were rained out.