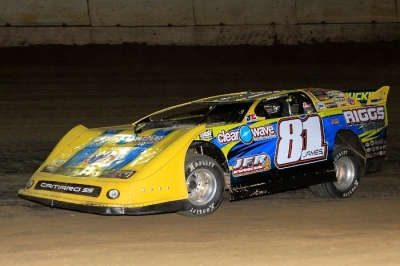 HIGHLAND, Ill. (June 22) – Scott James made plenty of good decisions during the third round of the UMP DIRTcar Summernationals Wednesday night at Highland Speedway. But the most important decision the Lawrenceburg, Ind., driver made was to move to the top groove as he and second-running Shannon Babb of Moweaqua, Ill., approached slower traffic midway through the 40-lap race. | Complete Summernationals coverage

James’s move to the top slowed the momentum of the hard-charging Babb, allowing James to stay out front on his way to earning his second consecutive Summernationals victory and a $5,000 payday.

“I heard somebody up there and I knew it was probably Shannon coming,” said James, who led every lap of the race after starting from the pole. “I believe that if we didn’t move up right then we wouldn’t have won the race. But it all worked out and we got another great win for this team."

The victory backs up James’s first-ever Summernationals victory Friday night at Cedar Lake Speedway in New Richmond, Wis. With two victories in the first three series races, James is off to a hot start and is beginning to like his chances as he chases his first Summernationals title.

“Everything’s clicking for us and we’re feeling pretty good about our chances in this deal,” James said of the 25-race tour that has been plagued by rain in the early going with four of the first seven events being postponed. “We didn’t have a great car tonight, but it was good enough. Now we’ve got some tracks coming up that we should be even better at and that’s got us really excited.”

Mark Burgtorf of Quincy, Ill., made a late-race charge, moving by Babb for second with just over five laps remaining. He closed to within a car length of James by the final lap, but ran out of time and settled for the runner-up finish. Babb finished third with Tim Lance of Brimfield, Ill., fourth and Doug Drown of Wooster, Ohio, fifth.

The second-starting Babb moved by Lance for second early in the race, but couldn’t close to within more than a few car lengths of James until the two leaders approached the tail of the field. Babb turned up the pressure as the traffic came into play, but just as he attempted to pull alongside the leader exiting turn two on lap 18, James jumped to the high side down the back straightaway.

The move was all James needed. Babb looked under James a couple of times as the two drivers raced around a long line of slower cars, but the traffic blocked his path each time.

James moved back down after clearing the slower cars while Babb stayed up high. It proved to be the wrong decision for Babb, as Burgtorf raced by on the low side, forcing Babb to settle for third.

“I knew once we got to traffic he was gonna have to move up, but I thought I could get to him before he jumped up there,” Babb said of his battle with James. “But he did the right thing. Then I stayed up there and it cost us second. It was really the only chance we had to get him after that and we went for it.”

Burgtorf was happy with his effort, but felt he could have found a way around James if he had a little more time.

“The good thing about it, we were right there on the leader at the end,” Burgtorf said of his career-best Summernationals finish. “We weren’t a fading-away second. We were getting a little better and if we had a few more laps, I think we had something for him. But I’ll take second, our best run with these guys and we’re happy with it.”

Clay Baumann led every lap of the B-Main to earn a starting spot in the main event while Frank Martin moved by Mark Faust and Jeep Van Wormer to finish second and also transfer. Van Wormer, who held second for the first half of the race, tried to battle back after losing the position to Martin, but settled for third and will also transfer to the feature.

Scott James will start from the pole of the night’s main event after a redraw among heat race winners. Tim Lance will join James on the front row with Shannon Babb and Mark Burgtorf starting third and fourth. Doug Drown will start fifth. ... Scott James, the current Summernationals points leader after two previous events, is finding it difficult to adjust to the short and flat Highland Speedway. “I feel like I need to get out of first gear and go faster,” James, who is making his Highland debut, said of the quarter-mile racetrack. “I’m not used to this. We’re just easing around out there and kinda coasting around.” While the Lawrenceburg, Ind., driver may feel like he’s hardly moving around the track, he’s actually been pretty fast and used the low groove to earn a convincing heat race victory. Set to start from the pole, James feels quite certain the bottom will be the dominate line in the 40-lap feature coming up. “Some of those guys were moving pretty good up high in the heats, but I think we’re quicker on the bottom,” James said. “I know Babb was good up high in his heat, but I think we’ll be a little better down low.”

Shannon Babb led every lap of the fifth and final heat race, leaving Matt Miller and Rick Salter to battle for second. Salter held the position at the finish after using the low line to move by the high-running Miller midway through the caution-free race. Miller finished third to also transfer to the feature.

Series points leader Scott James cruised to the fourth heat victory, leading every lap from the pole. Rusty Schlenk finished second after surviving a mid-race challenge from Ryan Unzicker, who finished in the third and final transfer position. Gary Christian brought out the race's only caution when he got into the front straightaway wall early in the event.

Doug Drown started from the pole and held off Kevin Cole and Randy Korte to win the third heat race. Cole birmed off the wall a number of times throughout the race on his way to edging Korte for second in a side-by-side finish less than a car length behind Drown. Fourth-place finisher Mark Faust raced with the three leaders early, but faded late and missed a transfer finish. The race was slowed by one caution when Paul Bailey spun in turn one.

Polesitter Mark Burgtorf used the low groove to hold off Jason Feger to win the second heat race. The high-runner Feger settled for second while Brandon Sheppard held off Jeep Van Wormer for third and will also transfer to the feature.

Tim Lance jumped to the lead on the start of the first heat race and led every lap for the victory. Dillan White trailed Lance the entire distance and finished second in the caution-free event. Kent Robinson pressured White late in the race, but settled for the third and final transfer position at the finish.

Drown’s lap puts him on the pole for one of five heat races coming up. Other heat race polesitters after group qualifying: Tim Lance of Brimfield, Ill.; Mark Burgtorf of Quincy, Ill.; series points leaders Scott James of Lawrenceburg, Ind.; and Shannon Babb of Moweaqua, Ill.

The top three from each heat race will advance to the main event while the remainder of the 21-car starting field will consist of consolation race transfers and provisional starters.

Qualifying was slowed when Steve Thorsten of Chebanse, Ill., got into the turn three wall and rolled over. He was uninjured.