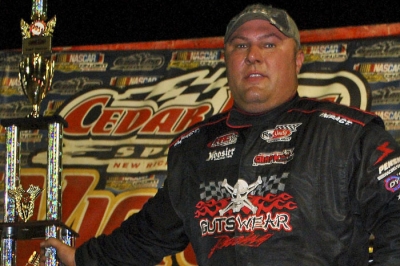 NEW RICHMOND, Wis. (June 17) – After running well in a number of events earlier in the season only to fall short, Scott James used a late-race restart to move from third to first Friday at Cedar Lake Speedway in the second leg of the UMP DIRTcar Summernationals. James earned $5,000 in breaking through for his first victory since teaming up with Riggs Motorsports at the beginning of 2011. | Complete Summernationals coverage

The Lawrenceburg, Ind., driver started fifth in the 30-lap race and overtook both Shannon Babb of Moweaqua, Ill., and leader Dan Schlieper of Oak Creek, Wis., in the final five laps on his way to earning the $5,000 winner’s paycheck during the first night of the 13th annual Masters weekend at the 3/8-mile racetrack.

“We’ve just been so consistent this year and ran really good. We just couldn’t get that first win,” said James, who settled for runner-up finishes on three different occasions before Friday's victory, his first-ever on the Summernationals tour. “This Riggs Motorsports team’s worked so hard and kept going and they’ve given me some unbelievably good race cars. This is a big win and it’s special for this team and our program.”

James didn’t make much headway early in the race, after going with a hard-compound right-rear tire. But he finally began his run to the front as the race neared the halfway point and was third behind Schlieper and Babb by lap 20.

The race’s final caution on lap 25 gave James the opportunity he needed. He moved by Babb for second in turn one following the restart before pulling alongside Schlieper on the extreme low side in turns three and four. Schlieper pulled back ahead, but James moved to the outside and shot by Schlieper exiting turn four on lap 28.

Schlieper battled back, pulling back even with James on each of the final two laps, but James turned back both challenge and pulled ahead at the finish.

“It’s kinda like playing cards. You just don’t show what you’ve got until you know you have enough to make it work,” James said of his late move to the lead. “I got that good run and got beside him down there probably lower than I should have been, but I knew I wasn’t going to pass him unless he missed a mark. When I got a good run on him the next time I jumped up to the high side and just rolled it through there.”

The third-starting Schlieper led 21 laps after overtaking Babb for the top spot on lap six. Babb chased Schlieper throughout the majority of the race, making strong bids to retake the top spot on restarts. But Schlieper pulled away each time and appeared to be headed to victory before fading late.

“I kinda gambled and went with softer tires than those guys and I really didn’t need that last caution,” Schlieper said. “We had a really good car and even there at the end he wasn’t going to pass me on the bottom. But he made a good move and got me on the top.”

While Schlieper stayed glued to the bottom most of the race, Babb spent most of his night on the top side of the racetrack. Even after leading early and pressuring Schlieper for the lead at times, Babb said he knew he didn’t have the best race car.

“I went harder on right-rear tire and didn’t tighten my car up much so I was pretty much leaning on the cushion,” Babb said. “I was just too loose to pinch my car off and try to run the bottom. But I think it was a pretty decent run and just did what I could with what I had.”

Along with his sixth place finish in Thursday night’s Summernationals opener at Kankakee (Ill.) County Speedway, the victory gives James a strong start in his bid to win his first title on the month-long tour and gives him momentum heading into Saturday night’s $10,000-to-win series event at Cedar Lake.

“It’s a point season all in one month and getting going early helps,” said James, who has previous points-chasing experience from his years following the Lucas Oil Late Model Dirt Series. “We did a good job points racing with Lucas Oil for four and five years and learned how to take care of our equipment. Now we’ll come in here again tomorrow and try to keep it going with another good run.”

Shannon Babb will start from the pole of the 40-lap main after a redraw among heat race winners. Brian Birkhofer drew the outside pole while Dan Schlieper drew the third starting position. The race’s provisional starters will be Donny Walden, Jack Sullivan, Gary Christian and Billy Moyer Jr.

Fifth-starting Dillan White moved by polesitter Chris Brown on lap three of the C-Main and later held off Adam Hensel in a side-by-side finish for the victory. Hensel settled for the runner-up position and will transfer to the main event along with third place finisher Tim Isenberg. Brown faded to ninth late after making contact with the wall midway through the race. Billy Moyer Jr. and Jack Sullivan were among those missing transfer finishes.

Second-starting Shannon Babb drove by polesitter Chris Simpson on lap five of the third heat race and led the remaining distance for the victory. Simpson finished second in the caution-free race while Brian Shirley held off Brandon Sheppard for third. Jason Feger finished fifth and will also transfer to the main event.

Polesitter Brian Birkhofer survived a three-wide battle with Will Vaught and Scott James in the opening laps of the second heat race before pulling away to the victory. James finished a distant second with Brady Smith third. Vaught finished fourth after scraping the wall on lap three. Jimmy Mars finished fifth to also transfer to the feature. The race was slowed by two cautions. The first was for a Dillan White spin while the slowing Kerry Hansen brought out the second.

Dan Schlieper used a strong jump on the start of the first heat to move to the lead over polesitter Jason Rauen and led all 10 laps to win the caution-free race. Rauen trailed Schlieper the entire distance and finished a close second. Ryan Unzicker held off Chad Simpson in a tight battle for third. Simpson settled for fourth with Dennis Erb Jr. taking the fifth and final transfer position.

Jason Rauen of Farley, Iowa, lowered the Cedar Lake Speedway track record Friday night with a 12.972-second lap during time trials for the second round of the UMP DIRTcar Summernationals. Rauen’s lap broke the previous record of 13.044 seconds set by Will Vaught of Crane, Mo., in 2010.

Rauen will start from the pole of the first of three heat races coming up at the 3/8-mile oval. Other heat race polesitters after group qualifying are Iowa drivers Brian Birkhofer of Muscatine and Chris Simpson of Marion.

The top five finishers from each of the three heat races transfer to the main event. One C-Main will send two more cars, with provisional starters rounding out the 22-car field for the 40-lap, $5,000-to-win feature.

The race is the first of two events during the 13th annual Masters weekend at Cedar Lake. The track will again host the Summernationals tour Saturday night for a $10,000-to-win event. ... Mike Spatola of Manhattan, Ill., won Thursday night’s Summernationals opener at Kankakee (Ill.) County Speedway, becoming the youngest driver to win a race in the tour’s history. The 20-year-old Spatola is not in attendance at Cedar Lake. ... Dillan White is debuting a brand new MasterSbilt Race Car Friday night. The Croton, Ky., driver planned to debut the car sometime during the Summernationals, and after the engine in his other MasterSbilt had issues Thursday night at Kankakee, he decided to go ahead and get the new car out for Cedar Lake. ... Chris Brown of Spring, Texas, will make both his Cedar Lake and Summernationals debuts Friday night. The up-and-coming driver, who races out of a shop in Oak Ridge, Tenn., is using the weekend to tune up for Cedar Lake’s $50,000-to-win USA Nationals Aug. 4-6. ... Brian Shirley of Chatham, Ill., will again compete in his backup car Friday night after his primary car picked up a vibration in Thursday night’s hot laps. But Shirley isn’t worried, saying that both of his Pierce Race Cars are “pretty much equal.” He finished third at Kankakee in the backup car. ... The USMTS modifieds are the only other division in action Friday night. Fifty-two drivers are entered in the $2,000-to-win event.