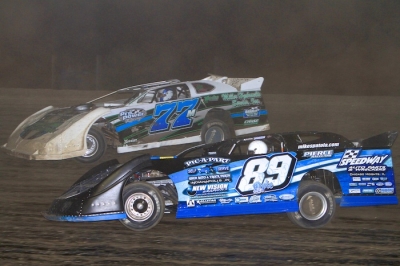 The second-starting Spatola jumped into the lead over polesitter Chad Simpson on the start of the 40-lap event and led all the way in scoring his fourth victory of the season at his home track, becoming the youngest driver to capture a Summernationals event. | Complete Summernationals coverage

“I tell ya I really love racing at this place,” said Spatola, who won Kankakee’s first two weekly events this year and won an American Late Model Series race at the track in May. “I don’t know what it is, but we sure get around here good.”

The 20-year-old driver dominated the first Summernationals event of his young career, pulling to a comfortable lead on both the initial start and the race’s only restart, which came after a lap-six caution for Jason Feger of Bloomington, Ill.

Spatola’s only obstacle throughout the event was slower traffic, but he navigated it perfectly and pulled away in the closing laps, forcing Simpson to settle for the runner-up finish. Brian Shirley of Chatham, Ill., finished third with Ryan Unzicker of El Paso, Ill., and Matt Miller of Waterville, Ohio, rounding out the top five finishers.

“I had a little bit of trouble (in traffic),” Spatola said. “I couldn’t get off the corner as good when I caught that lapped traffic. I had to pinch it down a lot more and I knew I had slowed down a ton. I was just hoping to hold on to the end.

"I just kept telling myself the whole race, 'Just be smooth and run this line, and don't do nothing until they challenge you.' "

Simpson closed the gap a number of times as Spatola battled traffic, but he was never able to mount a serious challenge to take the lead. Making his first visit to Kankakee, Simpson was happy with his effort and said that tire choice may have kept him out of victory lane.

“I thought maybe if he got into traffic we’d be able to run up on him and have something for him, but we just didn’t have the forward drive we needed,” Simpson said. “We went a little hard on tires and they just didn’t come in there like I thought they would. But first time here, we’re happy and we’ll take second.”

Shirley and Unzicker had a close battle early in the race as the sixth-starting Unzicker attempted to make a run forward. He pulled ahead of Shirley on lap nine, but contact between the two drivers sent him up the track as Shirley pulled back ahead.

Unzicker recovered from the contact, but his run seemed to stall out from that point. After the race he was none too happy about the incident and suggested that damage from the contact may have slowed him down.

“It seemed as soon as we hit the car kinda faded away after that. I’m not sure if we bent something or what,” Unzicker said. “We were coming on strong there early until that. I thought I had him clear, but I guess he thought different and decided to take my right-rear quarter panel off.”

Shirley, who was in a backup car after his primary race car picked up a vibration in hot laps, didn’t blame Unzicker for the contact, but said it wasn’t his fault either.

“I felt like he come up and I had a good run and a lot of momentum,” Shirley said. “It was nothing intentional, just kind of a racing deal. But if he’s gonna run the bottom he needed to stay on the bottom and not move up in front of me when I’m racing him up there.”

Notes: Spatola’s Pierce Race Car is powered by a Rhyne Racing Engine with sponsorship from Speedway Auto Parts & Wreckers, Chicago Heights U-Pull-It, Pic-A-Part, Big Daddy Scrap and Modern Carriage Werks. ... At 21 years and 8 months, Will Vaught was the previous youngest Summernationals winner when he won at Belle-Clair Speedway in Belleville, Ill., in 2008. Spatola’s victory comes at 20 years and 4 months. ... Feger, the defending series champion, used a strong high-side run to win the B-main, but couldn’t make the outside groove work in the main event. He finished 16th after causing the only caution. ... The event was originally slated to be the second round on the tour, but Wednesday night’s opener at Brownstown (Ind.) Speedway was rained out. ... The tour next moves to Cedar Lake Speedway in New Richmond, Wis. The 3/8-mile racetrack will host the series for a $5,000-to-win event Friday night and again for a $10,000-to-win event Saturday night.

Chad Simpson drew the pole position among heat winners with Mike Spatola to his outside; Brian Shirley and Brandon Sheppard are in the second row. ... Three Pierce Race Cars (all but Simpson) are among the top four. ... After Jason Feger's victory in the B-main, crew members and drivers headed to the scales to see what tires he used. ... In series events drivers have a choice among Hoosier LM-20s (softest), LM-30s (medium) and LM-40s (hardest). ... "Now comes the game that I don't like. The tire" said polesitter Chad Simpson, who typically races on tours that allow only tires equivalent to 40s. ... Billy Moyer Jr. broke the yoke on the back of the transmission at the conclusion of his heat race, which in turn broke his driveshaft. The crew replaced both units and expects the car to be fine for the main event. ... Provisional starters include: Jack Sullivan, Scott Schmitt, Rusty Schlenk, Brandon Thirlby and Aaron Ricketts.

Jason Feger used the extreme high side around the racetrack to move by Donnie Walden on lap six of the B-main and held off the low-running Walden to win in a side-by-side finish. Walden's runner-up effort will earn him the final feature transfer. Among those missing a transfer finish were Kent Robinson, Jack Sullivan and Dillan White.

After missing out on a pole starting spot in his heat race because he was changing a tire, Aaron Ricketts recovered to win the C-main and transfer to the night's B-main. He moved by polesitter Gary Christian midway through the race and pulled away to the finish. Christain finished second with Joseph Hughes third.

Mike Spatola moved to the lead midway through the fourth heat race after early leader Greg Johnson suffered a flat right-rear tire. Spatola pulled away from runner-up finisher Shawn Toczek in the run to the finish while Jay Morris brought home third. After pitting for a new tire under caution, Johnson raced through the field and moved by Jim Moon for fourth on the final lap to earn a transfer finish.

Polesitter Brian Shirly won the third heat race after pulling away from Billy Moyer Jr. late in the caution-free event. Moyer held second the majority of the race, but slowed on the final lap, allowing Bret Sievert to take the second position at the finish. Moyer coasted across the line to finish third while Bobby Pierce finished fourth and will also transfer to the main event.

Chad Simpson raced to the second heat victory after holding off polesitter Ryan Unzicker and Scott James in a tense mid-race battle. The high-running Simpson pulled away in the closing laps while Unzicker held off James for the runner-up finish. James settled for third with Shannon Babb finishing fourth to also transfer to the feature. Jason Feger and Rusty Schlenk both missed a transfer finish. The race was slowed by one caution when Torin Mettille went for a spin on lap five.

Brandon Sheppard drove around Matt Miller for the lead midway thought the first heat and pulled away to the victory. Miller finished second after holding off Dennis Erb Jr., who raced forward from his mid-pack starting position to finish third. Keith Piano finished in the fourth and final transfer position in the caution-free race. Aaron Ricketts was scheduled to start from the pole, but was late getting to the track and had to start from the tail. He finished ninth.

Ryan Unzicker of El Paso, Ill., topped 37 qualifiers Thursday night at Kankakee County Speedway during time trials for the UMP DIRTcar Summernationals opener. Unzicker’s lap of 14.590 seconds puts him on the pole of the first of four heat races coming up at the third-mile oval.