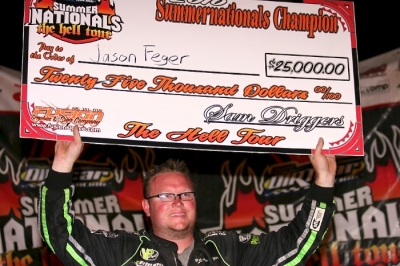 Jason Feger will admit it: he’s not ready for the start of the UMP DIRTcar Summernationals. But don’t take that to mean the Bloomington, Ill., star is anything less than confident about beginning his pursuit of a second consecutive title on the aptly-named Hell Tour, which kicks off Thursday at Kankakee County Speedway in Kankakee, Ill. He’s just stating a fact. | UMP DIRTcar Summernationals schedule

“You can never be ready for the Summernationals,” said Feger, who at least got an extra day to prepare when Wednesday's scheduled opener at Brownstown (Ind.) Speedway was rained out and rescheduled for July 12. “It’s the toughest deal in Dirt Late Model racing. You just go with the flow and try to be as prepared as you can.”

A grueling month of competition is on tap for Feger, 33, and his fellow DIRTcar Summernationals travelers, who face events at 25 tracks in nine Midwestern states during the 32-day period from June 15 through the series finale on July 16 at Oakshade Raceway in Wauseon, Ohio. The drivers will battle for a share of $167,000 in first-place cash and the $25,000 champion’s portion of the tour points fund.

All eyes will certainly be focused on Feger, the hip hard-charger who last year ended the three-year Summernationals championship reign of Carpentersville, Ill.’s Dennis Erb Jr. The Highside Hustler heads out on the road for the ’11 tour as the driver to beat.

“It’s definitely gonna feel different,” Feger said of his new status. “I guess everybody will be gunning for me now. Instead of being the hunter, I’ll be the hunted.”

It’s a challenge that Feger accepts, however. He doesn’t anticipate any letdown from his team, any complacency after finally reaching the mountaintop of the biggest test of man and machine in the Dirt Late Model division.

“We usually do pretty good at staying motivated,” said Feger, who has two Bob Pierce-built cars and four Rhyne engines at his disposal for the Summernationals grind. “Everything’s been going pretty good for us lately, so we’re looking forward to it.”

Feger enters the Summernationals with a healthy dose of momentum, notwithstanding his disappointing trip to Ohio’s Eldora Speedway for last weekend’s DIRTcar UMP-sanctioned Dream XVII. He failed to qualify for the $100,000-to-win A-Main following a heat-race incident — his only truly disappointing outing over the past month.

After finishing second in a World of Outlaws Late Model Series A-Main on April 29 at Hartford (Mich.) Motor Speedway, Feger clicked off three wins and just one finish outside the top five (a seventh) in his next 10 DIRTcar UMP starts. Eight of those races came in the two weeks between May 20 and June 4, a busy stretch that gave him a taste of the virtually non-stop Summernationals schedule.

“We’ve been racing a lot here lately and it’s been hot too,” said Feger. “We’ve been getting a good warmup for the Summernationals. It’s gotten us back to reality about what we’re gonna be facing here for the next month.”

Not that Feger needs much reminding about how difficult the Summernationals can be. He has been through the whirlwind enough in recent years to understand what it takes to be successful.

“If you’re running good, it makes it a lot easier on you mentally,” said Feger, who owns five career Summernationals victories. “Winning can fix a lot of problems. If you’re running bad and tearing stuff up, that’s when you start getting frustrated and the guys get frustrated. If you can consistently get good runs, it helps keep you mentally fresh.

“The physical aspect is the hardest part — how the series can be so tiring. When you have to drive so far between races, you don’t even have a chance to stop, eat a good meal or relax for just a little bit. It’s hurry up, load up, drive down the road, grab some fast food somewhere, and get to the track so you can fix the car in 100-degree heat. You get no time to recharge your batteries. ... They definitely don’t call it the Hell Tour for nothing.”

Feger won two features en route to his ’10 Summernationals crown, but he recorded seven runner-up finishes. He’s hoping to turn those seconds into victories this time around.

“If you can win some races, that’s when you’re making your money,” Feger said. “We’d definitely like to improve and win a few more races this year and work toward the championship that way.

“It would be real nice to win 10 or more races like Shannon (Babb) and other guys did when they won championships, but the competition is really tough. I think it would be hard for anybody to win that many races again. Not only does everything have to go your way to win a race, but you have to deal with guys like (Billy) Moyer (the all-time winningest driver in Summernationals competition) and (Don) O’Neal popping in fresh and running awfully good against us and everywhere we go you have some locals who know their tracks real well.”

Feger’s prime rivals for the Summernationals title figure to once again be former series champs Erb and Moweaqua, Ill.’s Babb, but there’s a host of other drivers jockeying for position in the spotlight. DIRTcar UMP national points Ryan Unzicker of El Paso, Ill., is among the core group of racers planning to follow the series along with up-and-coming teenager Brandon Sheppard of New Berlin, Ill., Jack Sullivan of Greenbrier, Ark., Scott James of Greendale, Ind., Randy Korte of Highland, Ill., Billy Moyer Jr. of Batesville, Ark., Donny Walden of Towanda, Ill., and Jim Moon of Zionsville, Ind.

“I think the 2011 DIRTcar Summernationals is going to be as competitive as ever,” said DIRTcar UMP director Sam Driggers. “We have a great group of drivers ready to go out on the road and bring fans across the Midwest a real action-packed month of racing.”

Teams that make it through the entire month will travel more than 4,500 miles among the tracks on the series, which boasts 17 races paying $5,000 to win, seven events offering a $10,000 top prize and a tour-best $12,000-to-win event on July 1 at Paducah (Ky.) International Raceway.

The series will include a handful of new wrinkles this season, Driggers said, including two-lap group qualifying at each stop; electronic transponder scoring every night for the first time; and four provisional starting spots at each race (two series points provisionals, one provisional based on 2010 overall UMP points; and one track provisional).