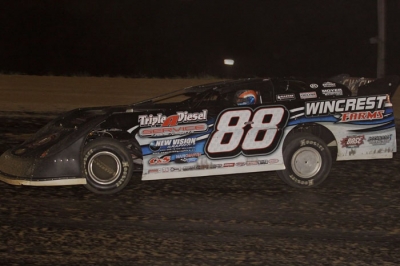 Malden, Mo. (June 10) – Wendell Wallace of Batesville, Ark., moved by Austin Rettig early in Friday night’s COMP Cams Super Dirt Series event at Malden Speedway and raced to his first series victory of the season and eighth of his career in the $2,000-to-win event. | Slideshow

Curtis Cook of Conway, Ark., started from the pole of the 35-lap feature, but it was second-starting Austin Rettig of Sikeston, Mo., pulling to the early lead. Rettig’s lead didn’t last long as Wallace quickly moved forward and took the top spot on lap five.

As Wallace pulled away for the victory, the rest of the field was left to battle behind him. Dane Dacus of Lakeland, Tenn., and Johnny Virden of Russellville, Ark., raced hard for the second spot with Dacus holding the position at the finish.

Virden settled for third while Jeff Floyd of Walnut Ridge, Ark., advanced from 14th to finish fourth. Rettig faded to fifth at the finish. Cook ended up 13th.

Notes: Wallace’s Victory Circle Chassis is sponsored by Triple A Diesel Service and Wincrest Farms. ... Floyd was the hard charger of the race with his 14th-to-fourth run. ... The tour will conclude the doubleheader weekend with a $2,000-to-win event Saturday night at Northeast Arkansas Speedway in Harrisburg, Ark.