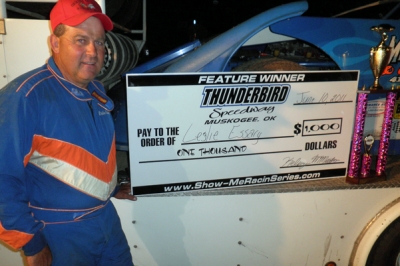 Leslie Essary poses with his trophy and check. (Show-Me Series)

Essary, who is second all-time on the series with 27 career series victories, took the lead on the seventh lap at the half-mile oval and pulled away to win the 25-lapper.

“You had to get the passing done pretty early or they had to make a mistake. It was really hard to pass tonight,” said Essary, who started fifth and earned $1,000.

Notes: Essary's Jimmy Greenway-owned GRT Race Car has a Mike’s Motor & Machine powerplant with sponsorship from Baillie Diesel and Mike’s Motor & Machine. ... Two cautions slowed the race. Jason Redman slowed at the top of turn two on the fourth lap. ... Debris brought out a lap-nine yellow, and the final 16 laps ran caution-free. ... Next up for the series is a June 24 event at North Central Arkansas Speedway in Flippin.