Hensel wins as Fegers fails to repeat at Huron 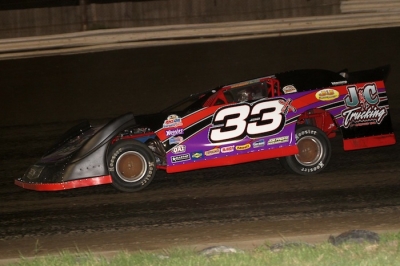 Adam Hensel heads to victory in his new No. 33x. (crpphotos.com)

Justin Fegers, who was gunning for a repeat at one of the richest WISSOTA races of the season, ended up 18th in the 25-car field.

Notes: The 23-year-old Hensel's Rocket Chassis by Tim Logan is sponsored by J&C Trucking, J&J Motorsports, Rod's Painting & Sandblasting and Pro Air Conveying. ... He's changed his number from his traditional No. 44 to No. 33x. ... Among drivers failing to make the feature lineup: Corey Nelson, Mike Stadel, Chad Williams, Eric Mass and Scott Anderson, who crossed the line first in a consolation race but was disqualified for weighing in light at the scales. .. Mass had motor problems in hot laps and scratched early in the evening. ... Engine problems prevented MIke Balcaen and Jason Fritzsche from starting the main event. ... Corey Tammen won the super stock feature and Lorin Johnson took the Midwest Modified feature. ... Dart Challenge competitors return to Huron July 9 for a $3,000-to-win, $500-to-start event. ... The series completes the season-opening weekend with a $2,000-to-win event Sunday at Casino Speedway in Watertown, S.D.